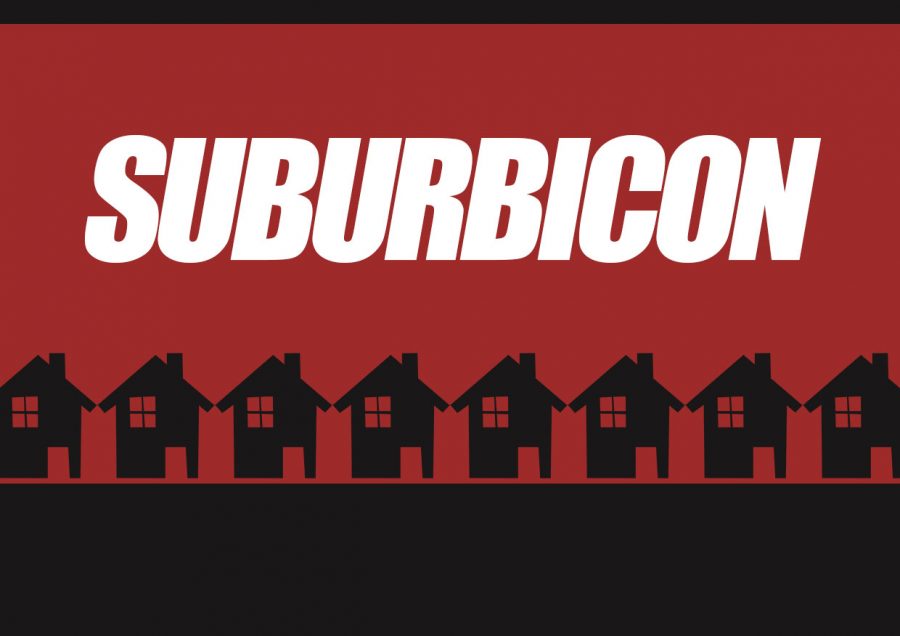 lthough I am familiar with the work of the Coen brothers, it has been some time since I’ve seen any of their films. I remember plowing through their filmography years ago. “Fargo,” “The Big Lebowski,” “No Country for Old Men,” and the 2010 remake of  “True Grit.”; all critically acclaimed films (save for “The Big Lebowski”, though it has since become a film of legendary pop culture stature), and I remember enjoying them just fine. It is somewhat baffling, then, to see their names attached to such as film as “Suburbicon.” The Coen brothers originally wrote the script for “Suburbicon” in 1986, and it had remained dormant until George Clooney, the director of the film, recently seized the opportunity for a rewrite, alongside Grant Heslov. Given the nature of the final product, I can only assume that Clooney and Heslov’s rewrites are to be blamed for the clutter that plagues the film’s story and its poor attempt at racial commentary.

I believe that this context is important for viewing “Suburbicon”, as it helps to explain many of the film’s problems, nearly all of which stem from its writing. Before I continue, I’ll give a quick plot summary. Gardner Lodge lives in Suburbicon, wherein he enjoys a leisurely, suburban lifestyle with his wife, Rose, and his son, Nicky. Gardner’s life is sent into a downward spiral of crime and deceit when two men break into his house and murder Rose, though it is revealed over the course of the film that Gardner may not be as innocent as he first appeared. As Gardner attempts to navigate the web of lies and villainy he has woven, racial tensions continue to rise, regarding a family of African-Americans that have just moved into Suburbicon.

Did the mention of the black family seem like a bit of an afterthought in my short synopsis? Because that is exactly as they seem in the film. Like an afterthought. The black family members are hardly characters at all. I’m not even sure we hear any of their names a single time. They are shown a couple of times being decent people, and being treated unfairly by the racist inhabitants of the neighborhood. That is the most characterization they are given. As Gardner’s story unfolds, the film periodically cuts back to their house, where we are shown a group of white protesters outside, as their protest slowly evolves into a riot by the film’s conclusion.

The racial commentary here is lacking in depth, and is ineffective as a result. The neighborhood is too busy rioting outside of the black family’s home to pay any attention to the actual criminal activities of Gardner, who, at one point in the film, kills a man in the middle of the street; the neighborhood is all away rioting, so nobody witnesses the murder. This whole subplot feels incredibly forced, and Suburbicon might have actually been an alright film if more effort was put into improving its thriller story and capitalizing on its unique setting rather than trying to shoehorn in a message about racism.

The rest of the film ranges from mediocre to less than mediocre. Much of the dialogue is clunky, and although the awkwardness of the dialogue is often meant to be comedic, I found that it generally fell flat in this regard. A lot of the characters behave very strangely; again, I believe that this was done for comedic purposes, but most of it was too awkward to be funny. Other than what I’ve already mentioned, though, there’s nothing in the film that stands out as being particularly terrible. None of the performances are notable, nor is the film’s soundtrack. Everything else is just passable.

Overall, I would definitely say that this is the most bizarre film I have ever written a review for. Well, except for maybe “The Visit”. In its attempt to juggle a suburban satire that deals with issues of racism and a stylized thriller, “Suburbicon” loses sight of both ideas. A disappointing experience; not as terrible as some have been saying it is, but not much better than that. Brando’s rating? One-and-a-half out of four stars.