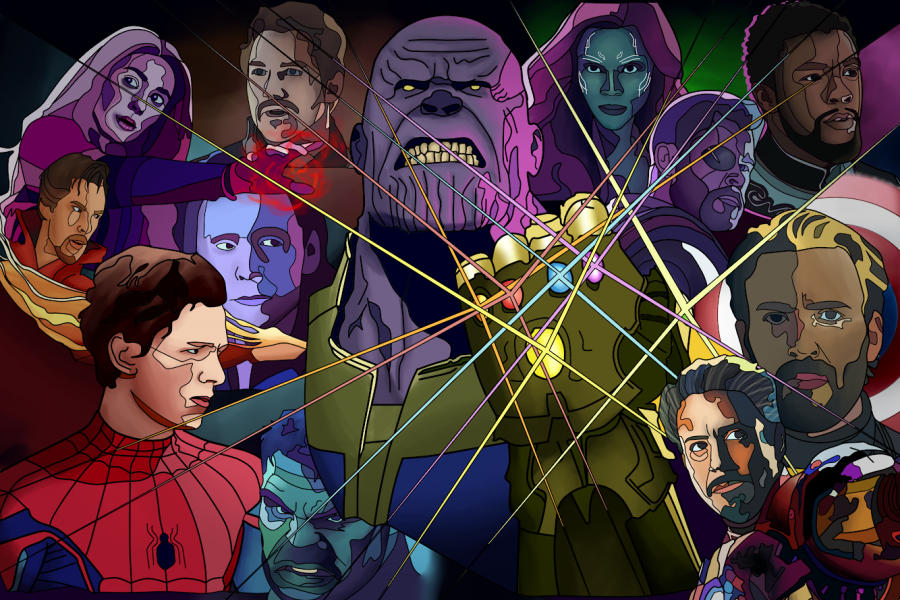 WARNING: This review of “Infinity War” contains spoilers from the movie. If you do not wish to continue to read, please redirect yourself to the front page.

Infinity War uniquely incorporated multiple hero’s from other Marvel movies like Guardians of the Galaxy, Doctor Strange, and even Black Panther to battle alongside side the Avengers. This really brought audiences from all sides of the Marvel fan-base together which was a really interesting approach that was executed perfectly.

The movie’s villain is none other than Thanos who is seeking all six of the infinity stones. The infinity stones are what connects all Marvel movies together. Thanos has already retrieved the Power Stone in the movie Guardians of the Galaxy so he crosses over to Asgard to steal the Space Stone we don’t see much of what went on in the process but it doesn’t end well for the Asgardians.

Throughout the movie it’s a battle between the Avengers, along with the other marvel superheroes, and Thanos to see who will be able to retrieve all the stones first. They travel through all the Marvel universes like Wakanda, Nidavellir, and even Titan.

We see groups combine from all the movies. For example, Iron Man is with Doctor Strange, and Spider-Man who all meet up with the Guardians of the Galaxy. In my opinion that is the best chemistry throughout the movie. All their lines flow so effortlessly and are extremely funny.

The attempts of the superhero’s seem to be going perfectly until Peter Quill, also known as Star Lord, gets upset at Thanos for killing Gamora so he tries to kill him but does so unsuccessfully which ultimately ruined the fate of half the characters.

That one action changed the outcome off the whole movie and all the characters.

On Wakanda a giant battle broke out because Thanos and his army were trying to get the final stone, the Mind Stone. Which is inside of Visions head and is what makes him a person. They needed to protect Vision from Thanos because if Thanos got the last stone, all mankind would suffer. Though many attempts were made, Thanos ends up stealing the Stone. With a snap, Thanos eliminates half the population, which even includes some of the superheros. This was an extremely bold move by Marvel, killing off many important characters that the audience loved caused a lot of backlash on social media. However, we know this won’t be the end for the superheros.

Not all hope is lost for the Avengers, like all Marvel movies, there’s the infamous scene after the credits. It showed Nick Fury with a woman talking and things start going wrong, for example, a helicopter crashes into a building and a car just randomly stops. The ending scene is a new logo being paged to who we believe is Captain Marvel.

Although the movie is filled with action, there are many scenes that filled the theaters with laughter and even tears. Infinity War is perfect for all audiences. If you haven’t watched Marvel movies in the past, you may get lost in a lot of the plot but you will still enjoy the movie overall.