Trump’s withdrawal from Iran Deal will have dire consequences 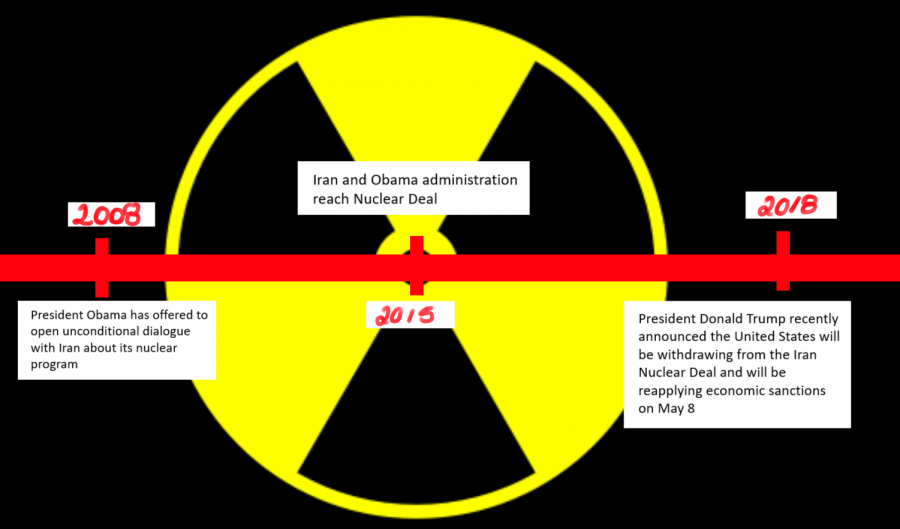 resident Donald Trump recently announced the United States will be withdrawing from the Iran Nuclear Deal and will be reapplying economic sanctions on May 8. This decision came four days before Trump had to make a decision to either renew the deal or to withdraw.

Such a move would have been a shock, but it is hard to be surprised when Trump has been very critical of the deal since its inception. Yet with this move, we have reached a point of no return. Our future with Iran is now fairly apparent, with nothing more for us to do than to examine the fallout that this withdrawal has caused us.

But before we do that, let’s have a little history on Iran. In the 50’s, Iran elected Prime Minister Mossadegh. He swiftly began to reform the country, with one the reforms being the nationalization of the oil industry so Iran could seize its profits and not American and British oil companies. America, however, didn’t like that. So America staged a coup against Mossadegh and successfully installed a Shah in his place. Now, the Shah was incredibly unpopular as he was a monarch that overthrew a democracy, which made liberals and moderates mad, and forced western values and practices on to the populace, which made Muslim conservatives mad. So fast forward to 1979, a revolution happens and the Shah’s government is toppled and an Islamic Republic is installed with a very anti-American stance (gee I wonder why). So when Iran then announced that they would be continuing their nuclear energy program, fears sprung that they would be building a nuclear bomb, so the entire west sanctioned them, crippling the country economically.

So, now that that’s covered, let’s go in to what the deal did and what we are pulling out of. First, it got rid of most of the sanctions placed on Iran, which has allowed for the nation’s economy to grow. But in exchange for that, among other tight regulations, Iran is not allowed to enrich Uranium to the point where it could be used in a nuclear bomb. All of those are really good things. And guess what? We just lost all those benefits.

Well, the thing is, the deal might not be lost just yet. All of the European countries that were also in the deal are going to try and do their best to keep the deal afloat without America. This means that the only sanctions Iran will have to face are from the US, and they still can’t enrich Uranium enough to make a bomb. So all’s well that end well right? Well, the other thing is, that doesn’t really matter. The real consequence from this is not that Iran will be crippled economically again, but that Iran will be crippled as a whole country.

The reason the deal was able to commence in the first place is because Iran’s current government is moderate and open to working with the West. President Hassan Rouhani, Iran’s current president, hoped the deal would free Iran from hardship and allow the country to be less isolated in world politics. Such a moderate viewpoint lost its legitimacy because of Trump’s actions. Now Iran knows they can’t trust the US anymore. The moderate government has reverted back to anti-US fervor so hard that a US flag was burned in the Majlis (Iran’s legislative body).

The US is no better when it comes to anti-Iran sentiments. National Security Advisor John Bolton and Secretary of State Mike Pompeo have both expressed wishes to go to war with Iran. Right now, we are reaching incredible levels of tension between the US and Iran. There is only one way it will end.

Iran cannot compete with America’s military. Not only that, when war breaks out, the US will have its strong allies, many of whom are in the Iran Deal, join them against the new menace. Iran as we know it will be wiped off the map; it’d just be another conquest in the American Empire’s quest for influence. And unless things are worked out with Iran, the Iran as we know it will be gone, and in its place another oppressive puppet Shah will stand, and Iran’s slow but steady turn towards democracy will be halted.

So get ready College Board. If things don’t change soon, you’ll have to start thinking of a country to replace Iran.