Hot Takes: The Use of E-Cigarettes in Schools 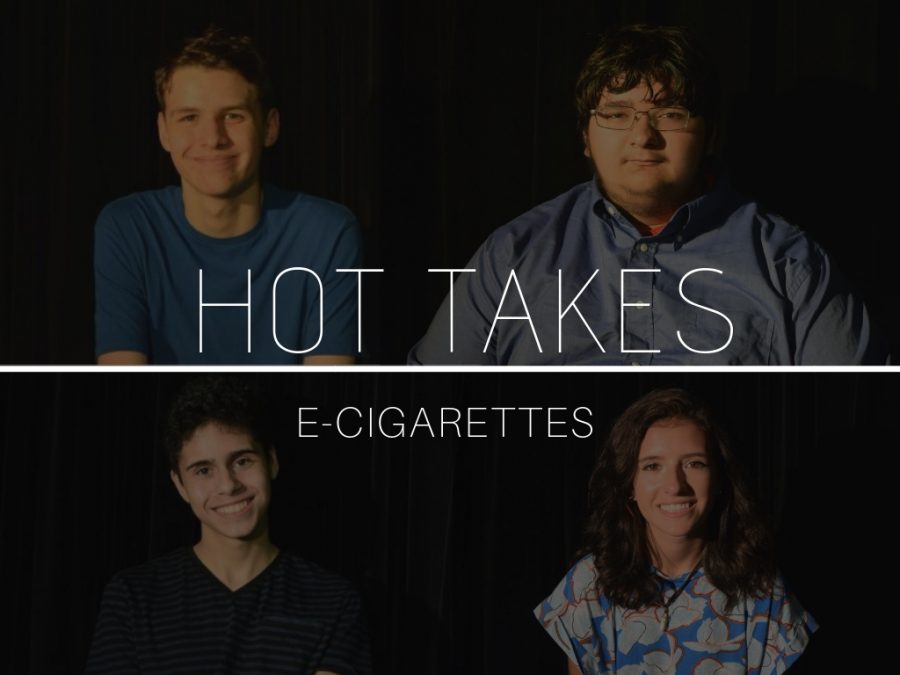 The use of E-Cigarettes, especially for young teens, has been a highly debated topic in schools and our country. Both parties have attempted to find solutions to how to handle the issue, and whether its an issue at all. Recently, our perspectives team got together in order to discuss the controversies and possible solutions to vaping in school. To start us off, Perspectives Writer and transfer student Brandt Ward discusses his time at Naperville Central and experience with vaping.

“I haven’t used them before, but it was a huge issue at Naperville Central. There were people vaping on my bus. There were people vaping in the bus circle where we waited for our buses. It was a very huge epidemic that people were aware of and a lot of people did, but no one really said anything. Nowadays if it doesn’t involve us we typically don’t care, which is normally a good idea, but I don’t know if it’s necessarily healthy when it comes to vaping,” Brandt Ward said.

Perspectives Writer Hunter Kulak then deconstructed the use of smoking, how that was handled in schools and how it compares to today’s world. Brant added onto this idea later on, describing the perception of smoking before we knew of the risks.

“I’ve seen kids vape all the time. I did it once and it hurt my throat. But kids back in the 60’s, they smoked all the time during school. Schools used to have dedicated smoking spots that the students could go to for the seniors to smoke. We don’t have that now because our culture can’t smoke in high school. Now you can get fined for owning a vape on school property,” Hunter Kulak said.

“Back then, which is a lot of the time when smoking was more prevalent, it was actually considered by doctors to be healthy. People not only did it for that reason, they also did it for the pleasure of it. As we’re aging, we’re learning that its worse. They didn’t know that it could literally cause cancer and it can literally cause heart and lung problems, which are clearly supported by today’s evidence,” Brandt Ward said.

Perspectives writer Laurel Westphal then puts her insight on the vaping topic, keeping a more balanced and indifferent point of view. Hunter Kulak and Perspectives Editor Ben Weiss seemed to agree with this while also acknowledging the cons of vaping in general.

“I’m not entirely sure where I stand on the whole thing of is it bad or not. I know that it’s bad. I know there’s like health issues and everything, but I think people could be doing a lot worse,” Laurel Westphal said.

“It’s not like marijuana or alcohol where it impairs their vision or memory. But the only risk with E-Cigarettes that I really see is people buying cheap ones one amazon. Those ones can actually burn a hole into your lungs, which is a bigger problem than cancer,” Hunter Kulak said.

“Smoking isn’t really causing problems with other people, they’re more harming themselves. Honestly, I don’t have a problem with people vaping or smoking, but when it starts affecting your personality, health, or lifestyle, like you’re skipping class in order to vape in the bathroom, it gets kinda iffy. I think that’s why we started having those fines,” Ben Weiss said.

“I kinda think there shouldn’t be punishments for it because it doesn’t cause any immediate damage to the school. The worst damage that it has done is to your own body, but in my opinion that’s your own punishment,” Laurel Westphal said.

Eventually, Hunter brings up a possible negative with kids using E-Cigarettes, which brings up an entirely new issue.

“The biggest problem with vaping is not the fact that it has nicotine, but its the fact that the FDA does not in fact regulate the juices and what’s put in the juices to flavor it. So they could be putting in tons of toxic chemicals in their body,” Hunter Kulak said.

“If E-Cigarettes got to a point where the school needed to make a decision on what to do with them, I feel like the good pathway is to regulate what they put in their E-Cigarettes. If you’re not putting a lot of stuff in your E-Cigarettes, it’s probably on the same line, if not better, than eat garbage every day,” Brandt Ward said.

As the perspectives team dissected the issue of vaping in schools, some solutions were thrown around to a mixed response. Hunter Kulak proposed having smoking areas in the school outside of class.

“You know how they have the two open areas of the school. You think they should just allow vaping during their lunch or access and have two other teachers watch the other area where they have to smoke?” Hunter Kulak said.

“While I do think in a perfect world that would be a sorta awesome idea, I don’t think it would be implemented because it’s kind of against the law for all of us to do any of that, because you have to be 21 to vape. It used to not be like that. If it wasn’t like that anymore we could totally do that, but it’s literally illegal for any of us to do it,” Laurel Westphal said.

Another solution that relates outside of school was using non harmful vape as medicine for clinically depressed people, much like medical marijuana.

“I feel like vaping could be prescribed as an alternative to stress medication. The doctors can give out a non nicotine version where its not bad for you, it’s not addictive and it’s FDA regulated,” Hunter Kulak said.

“You could argue that we can use vape for medical reasons, but at the same time we don’t know what’s being put into this stuff. There would be a lot more regulation that would need to be required, and I don’t think they would even allow vape to be used for medical issues,” Ben Weiss said.

In the end, there is no easy solution to the vape issue, and there’s not real telling of whether it can be seen as safe or not. It is up to the schools and our government to decide, but it is also up to the people to express their beliefs and find a proper solution. So as we wrap up our meeting, we leave with the sense of newfound understanding, and the knowledge that we could influence our school and country. That is what being a perspectives writer is all about.