The Mayor of Aurora visits Metea students to discuss his occupation 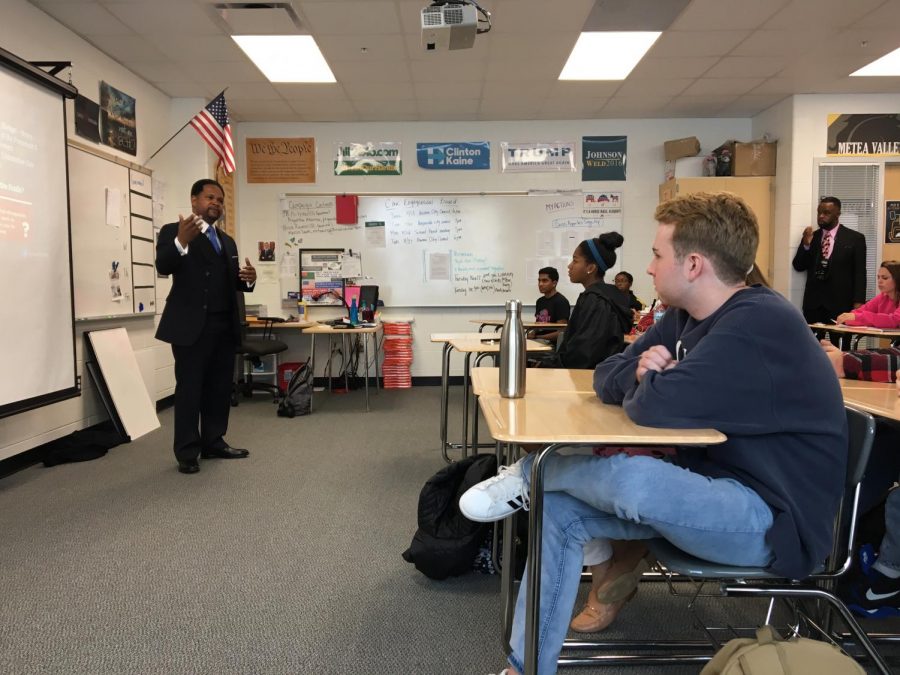 Richard Irvin talks to a Period 4 Government class about his position as Mayor.

etea Valley received a very special visitor when the Mayor of Aurora, Richard Irvin, spoke to a select group of government classes on November 15, 2018. When he was there, the mayor discussed the importance of his position and personal story with being in politics and why he enjoys being in office. The Stampede recently had the opportunity to talk with the mayor and gain more in depth information about what he represents.

Could you describe your political career and everything you did before becoming mayor?

I guess my political career started when I was a prosecutor. I worked with the Kane County State’s Attorney’s Office, and one of my last jobs was a community based prosecutor. So I was assigned out in the community working the police, working with the community, and working with other government agencies to address whatever issues we had in Aurora, from throwing gum on the streets, to prostitution, to drugs, and even worse, shootings and gangs. We put things in place in ensure that we stop that type of violence and crime in the city of Aurora. That was about fifteen years ago that we did that, so some of the efforts that we did then led to our low crime rate that we have now. So after I was a prosecutor, I opened my own law practice for about fifteen years. My first actual political office that I held was Alderman for ten years before I ran and became mayor. I’ve been mayor for two years now.

What are your main goals for improving the Aurora community?

So I have three main goals that I focus on. One is education. I gotta make sure that, as the second largest city in Illinois, we have the best educational opportunities for our young people throughout this state and I’d like to compete throughout the nation. The reason that’s important in a city like Aurora is because we have six school districts, so because we have so many school districts that offer so many types of education, its important that we all work together so we provide our kids the same very good in quality education. I want our kids that live in the near east side, where I grew up, to have the same opportunities as other districts. Then there’s economic development. Bringing more business, more residence, bringing more housing development and commercial development. What this does is it brings more economic viability to a community. That means a person paying a certain amount in their taxes for their residence don’t have to pay as much because now we have these businesses helping. It levels the playing field and makes it so people are interested and wanting to move to Aurora because they don’t have to spend all their money in taxes. And then my third one is safety. I wanna make sure we have the best police force, the best fire department, and make sure that every citizen that lives in the city of Aurora is safe as possible. I want you to be able to go out in the evening and walk around and not worry about violence and gangs. I want to make sure that our young people don’t have to worry about violence and parents who live in the neighborhood and want to buy a house. I want to make sure our whole community is safe no matter where you live.

What’s the most challenging thing about being mayor?

The biggest challenge I face is making everyone happy. [Out of 100 people], no matter what I do and how I do it, and if I make 75 people happy, 25 people aren’t gonna be happy with the decision I make.  So what I always practice is utilitarian approach, which is the greatest good for the greatest number of people. And I recognize that I’m never gonna make everyone happy. People have different ideas, different personalities, and different desires. So all I can do is the best I can possibly can the greatest number of people.

Is there anything you like most about being mayor?

The whole reason I ran for office is because I wanted to help people. So my favorite part about being in office is when I feel like I made a difference and we made a change. Years ago, Aurora had a terrible reputation, where we were one of the top ten per capita in the United States for having some of the worst crime, where we had up to thirty murders a year. And in 2012, we got down to no murders at all, so we totally changed our crime stats and we started to change our image and perception, and I’m a part of that now. Years ago, there were two cities that you wanted to be apart of. Chicago and Aurora. All these other cities around Aurora were just suburbs, and over the years the cities would get larger and Aurora wasn’t looked at as an essential location, so what we’re trying to do with work to make Aurora a better community for all of us and make us that city that everyone wants to be apart of. My most favorite thing is to come and talk to students about government and the city of Aurora as a whole.

A couple weeks ago, you came to Metea to talk to students about your position as mayor. How do you think educating young people about politics is beneficial?

I think it’s always good to be educated and let our young people know about all the options they have. People say you’re in politics. I like to look at it as “public service”. I’m here because I care about my community and want to make a difference. If I come talk to you, maybe one day you’ll say “you know I like what he had to say. Maybe one day I want to be a public servant and I wanna help my community”. So I’m just talking to kids about other options and other things that they can do with their future. I have many friends who are doctors. It’s great to be a doctor, but not everyone can say that they are a public servant, and I want to spread that word and let people know exactly what a mayor does and the importance of our local government.

Finally, how do you hope to impact young kid and students in the Aurora area?

I hope to impact them greatly. I go to schools weekly, whether I go to grade school to read to kids, or I go to middle schools and high schools and just talk to young people about achieving and being more than your circumstances, or just doing something you never considered doing. I like to spread as much education and cheer around our young people as possible, because the reality is I’m not gonna be doing this forever. We’re gonna need you guys to step up at some point and be our future and take the helm and be responsible for the direction we go in, so if we prepare you now, you’ll be ready to take care of us for the future.