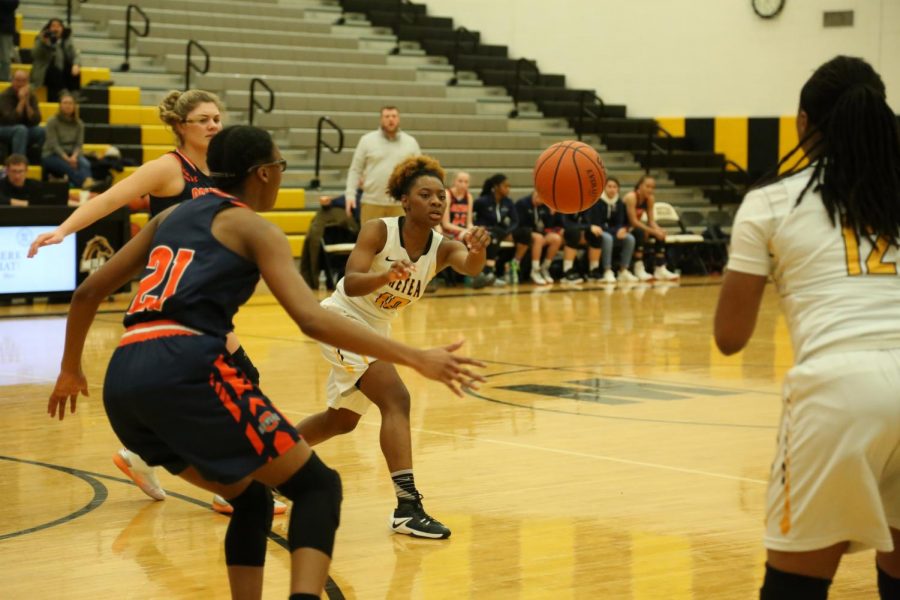 With just three games until the Illinois High School Association Regionals this season, the varsity Mustangs are in the fight to keep themselves in check. The Mustangs fell short last night at home to the Oswego Panthers by four points. The final score was Metea 45, Oswego 49.  However, the Mustangs fought hard against the Panthers throughout the game. Trying to earn momentum and take advantage of the crowd’s energy. As a holistic view of last night’s game, the girls gained what cannot be closely looked at from just winning every game: communication.

During last night’s game, the girls had a clear idea on what to expect with Oswego High School. Shooters and center players were outstanding factors to sinking in three-point shots throughout the game. Even if the Mustangs defense was catching the Panthers off guard, the opportunity was substantial, yet achievable for the opposing team to edge out the Mustangs. Oswego losing only five games throughout the season, the Mustangs had two choices: play to their extent, or push themselves to reach up towards the heat that Oswego was going to bring.

“I knew that they had a couple of shooters, they pretty much shot the lights out. And they had a big-time center who could jump really high which was the key piece of their offense,” junior Nazuri Whigham said.

The first quarter was an honest slap in the face for the Mustangs. Constant loss of the ball and fuzzed focus on the play was taken advantage for the opposing team. Layups and three-pointers were in abundance for the Panthers to take the lead.

“I think we can definitely close out better on shooters. We don’t want to allow them to get as many shots as they did. And definitely communicating and talking to defense in order to know where our players are to not lose track of a shooter around the court,” senior Raniyah Naylor said.

The third quarter rolled by with a bad score for the Mustangs, and at this moment, a spark of opportunity for the girls was present. And one can bet that the intense momentum started with the help of the crowd.

“I think we just kept our energy high and we just built off of each other. We never got down even though we were down by 15 [at the beginning] and towards the end, we were only down by 4,” Whigham said.

Whigham kept in check with shooting guards Raniyah Naylor and Paige Buranosky and led to Chloe Kurkjian and Katie Flanders sinking in three-pointers. Weaving in and out of the court, the Mustangs were sure to keep the ball open regarding the options on the court in order to execute shots at a precise location. After a few points gained on the Mustangs side, the crowd went wild chanting for the girls.

Just about five minutes into the fourth quarter, the Mustangs knew what needed to be done in order to edge out the Panthers. Spectators were at this point up at their feet, experiencing heart-sinking moments when the Mustangs stumbles and screaming when retrieving a point.

Back and forth, the Mustangs were in control of their speed and momentum even when the stakes were high. Point guard Nazuri Whigham bolting throughout the court and teammates fighting for the ball opened up opportunities to get close enough to the basket and closely dropping the ball to the brim of the basket.

The girls put up a defensive fight last night with the Oswego Panthers. With the upset from the first quarter and a spike of energy by the fourth quarter, the Mustangs gained a valuable lesson–communication. And putting their form in communication to the test last night was a powerful momentum to put up the best fight against a competitive team.

“I think playing together for a while, we know everyone’s’ weaknesses and strengths. Yeah, there is some eye contact, pointing, and maybe a couple words here and there but we definitely know who’s strong enough to guard who and we pick and choose which player to guard and that helps a lot,” Naylor said.

The Mustangs will play against the Naperville North Huskies this coming Saturday at 2:45 p.m.