Rent: Live is a prime example of how censorship ruins the integrity of art 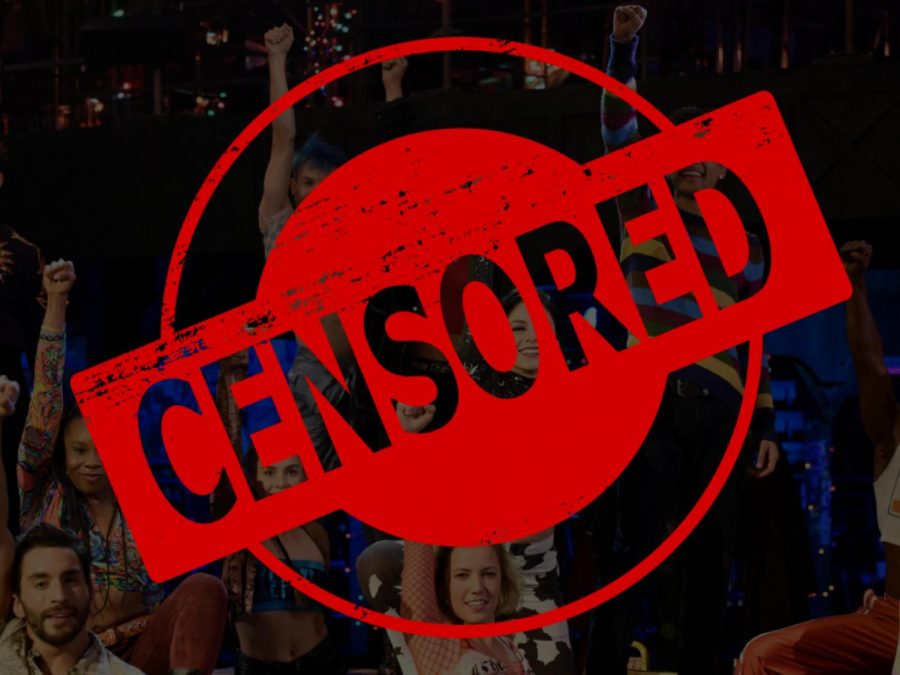 Last Sundays FOX television program, “Rent Live”, has caused a large amount of controversy and criticism even before its initial airing. An event that was supposed to be a heartfelt and inspiring show live experience that honors the legacy of this show, its impact on society and the people who made it turned into a mess of a program that received mainly mixed to negative reviews from critics and fans. Some have praised the performances of the show, with actors Brandon Victor Dixon, Jordan Fisher, and Vanessa Hudgens receiving particular rave reviews for their respective characters. Some have also praised the set design and many of the tributes to the shows long history, but several issues under the surface are a little more than obvious.

For those who don’t know what “Rent” is, here’s a small summary. The show, featuring music and lyrics by the late Jonathan Larson, is a modernized version of the opera, La Boheme. It takes place in the early 1990s in New York City around the time of the AIDS epidemic. The focus is on eight young adults, each with different passions and ideas, and four of which with AIDS, as they start to overcome the many flaws they have with the people around them, and spreads the message of human connection and love helping us overcome the many challenges we may have.

When the show initially came out, many reviews focused on the fact that this “live” show was only partly live. During one of the dress rehearsals the day before the show, one of the lead actors, Brennin Hunt, broke his ankle and was not able to perform the show on its scheduled air date. Because of this incident, the majority of the show used pre-recorded footage from a Friday dress rehearsal. While it makes sense why FOX would make the decision to do this, as it does give a more accurate representation of what the show was meant to be, many have criticized the move due to the fact that nobody on the production team hired an understudy to fill in for Hunt, which would allow for them to do the show live as promised. Some have also stated that using pre-recorded footage makes the show feel less personal and natural, with several actors being noted as having low energy. Some have assumed that the actors would have put their all into the performance if the show were done as an actual live show.

In fact, on the day that the show was aired, the cast and crew put together a modified concert version of the program that was recorded in full. Much of the blocking and costumes were either removed or modified, and it didn’t utilize much of the set, offering a more emotional, personal and intimate experience that some have claimed to be better than the dress rehearsal. Many fans are hoping for this version of the show to be aired or released in some form in order to see what “Rent Live” could have been.

However, there is a larger issue with the content of the show that I feel ruined the entire experience for me, and that involves the topic of censorship.

Now with the show being a televised event, much of the content was removed and replaced with less offensive content, which I guess it’s understandable, but if you’re doing to take out a large portion of content in order to appeal to a larger crowd, why would you do something as R-rated as” Rent” in the first place?

Much of the censored content doesn’t even make sense. In the original show, there is is a song called “You’ll See”, and one of the characters says the phrase “poo-poo”. In the television version, this was changed and it literally makes no sense. Apparently, its offensive to say that word on live television. However, during a later song called “La Vie Boheme”, there’s a set of lyrics where the characters proclaim “to faggots, lezzies, dikes, crossdressers too”. So those phrases, which is often used as a derogatory term, is okay, yet the word “poo-poo” is unacceptable.

What makes the removal of this content all the more saddening is that much of it was important to the shows charm. “Rent” at times is a very realistic, gritty and cynical show that is meant to represent the more harsh aspects of lower-class New York City. In fact, the writer of the show, Jonathan Larson, based much of the show’s world and characters off of his own life experiences in New York City, so much of it was written as personally and accurately as possible. He has even stated that the swearing in the musical was an intentional choice in order to get across the realistic vibe of the content of the show. At times, it even develops the characters of the show. Why do you think Mark Cohen, a cynical lower class filmmaker, is shown to have the largest potty mouth and most offensive comments of the show.

Because of the censorship of the live version of the show, not only is it disrespecting the art and legacy of somebody who clearly had a vision, but it also waters down the content to a point where it does not feel genuine anymore. Audiences connect with a story more when they can personally connect with the story and can see this happening in real life. When the language and dialogue feel real and not artificially manufactured by a studio, the content is going to feel all the more real and truly connect with the viewers. The harsh content actually benefits the writing and gets across the setting of the world they live in, especially in a time period where the country was in great fear and sadness. This is why the Broadway rendition of “Rent” has become a cultural phenomenon, while this live broadcast of it will likely be ridiculed or forgotten about after a few months. If Fox wanted something more family friendly, they could have just done something more age appropriate like “Oklahoma” or something like that. Not a realistic and depth filled musical like “Rent”.

It is just that such a powerful show has been butchered by the network in an attempt to appeal to the general audience. Actual theatre is so impactful because it can tell stories that come from the heart and can connect to the writer and the audience. When you take away the writers free will in order to make entertainment more clean and appealable, the writer’s creative integrity is lost and the passion is lost. This is why “Rent Live” was a fundamental failure and takes away from the message that the show is trying to get across.