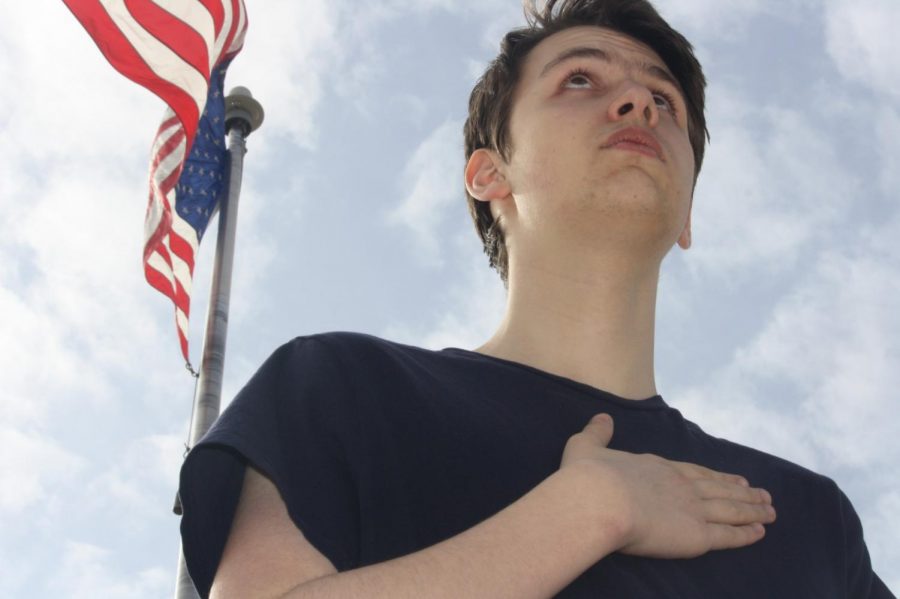 nce routine and now what many claim to be a definitive public display of one’s political allegiances, the national pledge of allegiance has proved to be a dividing factor among Americans and more and more recently, high schoolers. And as today’s youths wrestle more and more with such beliefs, we come to find that day by day, they are further questioning aspects of society they might never have been anticipated to have.

It was in 1892 that the pledge was actually published for the first time in a juvenile magazine called “The Youth’s Companion,” which was celebrating the 400th anniversary of the “discovery” of America. A month later, a national committee of educators and community leaders proposed that Columbus Day should call for a recital of some sort in order to honor their country, and it would include adolescents and adults alike. Thus, in October 1892, these very words were spoken in schools across the country: “I pledge allegiance to my Flag and to the Republic for which it stands: one Nation indivisible, with Liberty and Justice for all.”

While controversy has been spurred over the significance of the pledge itself considering dynamics of our country’s history, many also preach that the expression neglects to account for nonreligious persons and consequently undermines their First Amendment rights.

“I don’t stand for the pledge. They say, ‘Separation of church and state,’ yet God is included in the pledge. Now, I’m religious and believe in God but not everyone does, and not everyone is ‘included’ in what the pledge stands for. There are so many other issues such as ‘liberty and justice for all’ and that is a lie,” junior Laura Meyers said.

As revealed in its earliest form, the Pledge of Allegiance never actually included the words ‘under God’ after ‘one nation,’ and was dedicatedly a sentiment to American progress and growth, also meant to enforce values of respect and reverence in young students when proclaimed in schools. Yet, some students are making tough decisions about how exactly to go about the pledge while it entails elements they both cherish and negate.

Senior Alicia Cruz said, “Personally I’ll stand to respect my country, but I won’t put my hand on my heart because I don’t feel the same respect back sometimes. And sometimes my teacher will tell me to do the pledge, but I’ve told her the most I do is stand for it and that’s all.”
On the other hand, many students choose not to question the literal interpretation of the flag, and that it mustn’t be confused with radicalism or forced religion of any kind, but simply is an ode to unity and citizen participation.

“I don’t see a problem,” junior Ani Tumalapalli says. “They did this in India every morning too and it encourages a positive attitude toward the country and its history.”

Similarly, sophomore Maddie Satinover states, “I agree with the pledge because it gives a moment of respect to our country and it is a reminder of how fortunate we are to live in a country that’s free.”

In 1943, the United States government recognized the pledge, but only a year later did the Supreme Court actually rule that the requirement to recite its words violated the First and Fourteenth Amendments, the first protecting students’ liberties of speech and religion, and the latter their privileges and immunities as American citizens. Therefore, since 1943, students have never been required to say the pledge.

But in 1954, things took a turn for what many claim is the worst when President Dwight D. Eisenhower achieves his Congressional request of inserting the words ‘under God’ into the oath. At the time, some state schools, such as those under the West Virginia State Board of Education, would expel students if they did not fully recite the pledge and salute the flag. However, the Supreme Court eventually fought this power of authority.

More recently, government authorities took a significant course of action on Feb. 4 of this year when a sixth-grade student was arrested for his refusal to partake in saying the pledge that day at school. His class was being administered by a substitute teacher who was unfamiliar with the school’s code of conduct stating that no student was legally obligated to stand. After the teacher spoke with the school administration, the student was asked to leave class but upon nonviolent resistance to a police officer, was taken to the nearest juvenile center.

While the student will not receive any records or charges, the public is now arguing that school policy surrounding the pledge is unclear and often unfair, and more light must be shed on this complicated issue of whether or not school districts are truly abiding by federal law. A simple protest of racial discrimination, the student’s actions are majorly deemed as sanctioned while his refusal to stand was relatively undisruptive.

The history of our nation and a wealth of political polarization are incredibly necessary aspects of the dispute surrounding the Pledge of Allegiance. For reasons of personal identity, values, and even laziness, students may choose to or not to stand for and participate in this gesture that has undergone substantial changes over the decades. However, the new generation of youths letting their voices be heard is more inspiring than anything.