Adults and teens anxious about effects of smartphone reliance 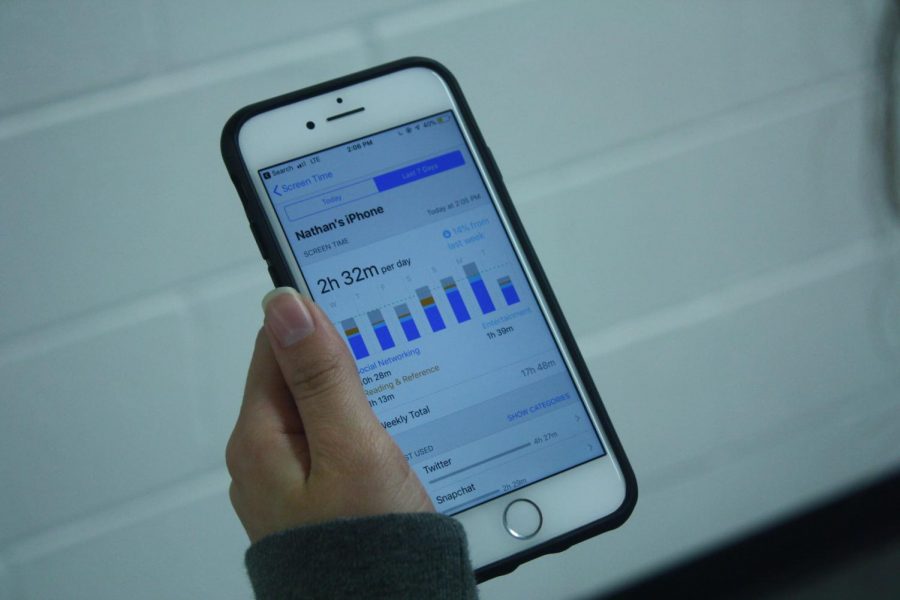 Apple's screen time statistics can be found in the settings. You get a weekly summary and can check hour by hour.

Every day we might perceive events as problems that might not really be an issue. Today, adults will see a group of preteens around a table engrossed in their phones, and jump to the conclusion that those smartphones are ruining their minds because adults just weren’t raised that way and they turned out fine. Are people are less involved in the world around them, or are they more involved with the world? The ability to communicate with people anywhere, from anywhere, is a wonderful opportunity. Yet is the rising anxiety and depression in teens stemming from smartphone addiction?

Screen Time is Apple’s measurement of how much time you spend on your phone during the day. The data gives a number to the question. Are we addicted to our phones? If so, to what extent? Is it a bad thing or a good thing? Will we be better or worse off in 20 years?

Smartphones have become an extension of our own livelihood. They are attached to you at all times, begging you to check what they have to show. To say that we need to go back to the old ways and that phones do more harm than good would be a misguided viewpoint. The mobile phone is one of the grandest inventions, evident by how much we depend on it. What might be necessary is regulation on how much we use our phones. That regulation won’t come from anyone but yourself.

The phone fills the “dead” time in our lives. Where there is no one to talk to, nothing preoccupying your hands, and nothing to really do. There is a need to be entertained, this plays into the shortening of our attention spans. Problems specifically exist with this psychological urge to grab at our phones. We can be entertained in seconds, viral videos rarely go over 30 seconds. The ‘Vine’ age changed how we consume social media. Often you subconsciously whip out your phone, open Twitter/Instagram/Snapchat, read and then put it away. Rinse and repeat throughout your entire day.

Teenagers are subjects in an unofficial grand experiment called growing up with social media. According to research done by the Pew Research Center, 95 percent of teens age 13-17 have a smartphone or access to one. Half of them report using the internet “constantly.” It’s a daunting idea, that we aren’t really sure how social media and smartphones will affect youth in the long run. It’s all just happening and society can only cross its fingers hoping that changes are positive.

One new problem that many professionals are seeing is the spike in anxiety and depression in teens everywhere. Anxiety and depression are not new, but there is increased discussion today. According to a study done at Johns Hopkins University, 3 million adolescents aged 12-17 have had at least one depressive episode in the past year. Social media affects teens in different ways and the rise of social media has been simultaneous to the rise of mental issues. Part of this is the stigma starting to dissipate, but part of it has to do with the anxiety that goes hand in hand with a connection the world and its news.

“I think [anxiety] has increased. It’s always been around, but the level of resilience has gone down,” Metea social worker Lara Polavieja said. Polavieja has been a social worker for 21 years and is a mother of preteen girls, so she has had firsthand experience in seeing technology’s influence on youth. Measuring how anxiety levels have increased is difficult because of how we report on the data. The stigma around mental illness has gone down over the decades, leading more people to be comfortably diagnosed. Although the theory that smartphones and social media have steered the spike is well-regarded among professionals.

“I don’t remember as much anxiety or as much depression. I have seen even in the last ten years a surge in both. Students and even younger ones tend to be very anxious,” guidance counselor Lisa Lassandrello said. Screen time particularly has provided a number to the fears we have of tech absorption. “Until I started getting those summaries, I didn’t realize how much I was using it. I was appalled,” Lassandrello said. Lassandrello notes that she normally stays around two hours a day now.

Being conscious of screen time seems to be the first step to lowering it and reversing some of the effects constant use may have. “[My phone] needs to be turned off like an hour before I go to bed, I have it on silent all the time,” Lassandrello said. Taking time off from your phone at night can also increase the ability to sleep. A study done by sleep.org says that 71 percent of people sleep with their phone in bed with them or on a nightstand. Also, computer, tv, and phone screens emit a blue light that decreases melatonin levels. For a populous that needs sleep, phones can make getting those eight hours more difficult. “I keep my phone on my dresser instead of my nightstand. It forces me to take multiple steps to get to my phone at night,” Metea teacher Casey Solgos said. Habits like putting your phone away from where you sleep can help with the worlds sleep problem.

The most enthralling release from the Pew study is that 54 percent of teens believe they spend too much time absorbed into their phones. That level of self-awareness is interesting looking forward because it shows that just like their parents, they think they spend too much time on their phones. “Sometimes when I look at the screen time at the end of the day I do find out I’m using it a lot more than I should be,” senior Christopher Mickolayck said.

Polavieja notes the human need for connection and how it is now being found through phones, yet the communication over text or call is less authentic and effects people differently. “We all as humans want to feel socially connected, and there is beauty in having a conversation with somebody,” she said. “Kids are losing their social skills and are not as motivated to have those conversations and the deep authentic connection to each other.”

Disagreement between generations is nothing new. Truth is, taking a walk through a busy town will prove to you that just about everybody relies on smartphones for quick entertainment. Some teens believe the smartphone does help their connections with others. “I don’t consider myself obsessed with my phone but my parents think I am. So I think it’s just a different perspective among generations,” Mickolayck said.

A part of phone use comes down to a physical urge. There’s a muscle reflex that results in people checking their phones sub-consciously when given a minute of free time. This becomes an issue in the classroom particularly. Solgos has been teaching for over a decade and has noticed the change. “Sometimes it’s a very literal and explicit distraction when students have them out on their desks. If I’m delaying for a little bit to allow students to socialize their instinct for many of the students is to be on their phone checking stuff,” Solgos said.

The phone “problem” may be overstated. The solution to anything that absorbs you isn’t cold turkey. Just being conscience of your screen time will prove how much time is being spent on your phone. Whether or not that is a positive change is up to the person.