Energy and composure not enough against Waubonsie Valley 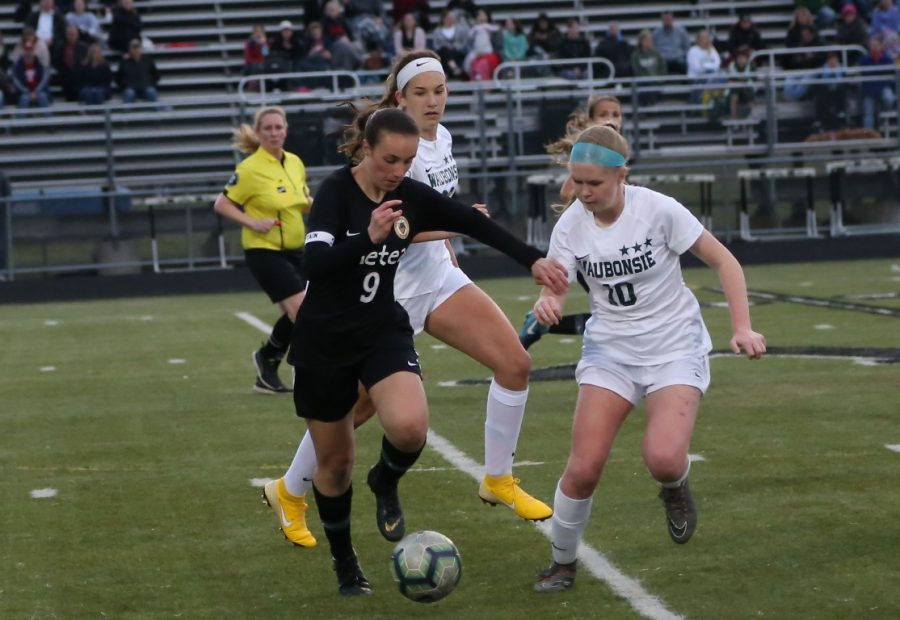 The Mustangs were in a tough spot playing rival Waubonsie Valley last night, leading up to a heart-wrenching final score of 1-0. The contrast in gravity, however, between both teams’ powerful response towards the ball was what made last night’s game an angelic moment for the girls.

Kickoff started with an immediate attack amongst both teams. Waubonsie initiated an aggressive attack on the Mustangs; however, goalkeeper Nikki Coryell took control within the first period. On the defense side, the Mustangs knew the bolts of the Warriors’ midfield and Metea forwards stuck their leg through any possible opening and kept the pressure on the ball to allow the ball flow through the field.

The game was looking good for the Mustangs. The energy was towering over the opposing team, the ball was moving in a corresponding direction, and the girls knew where they needed to be and when. Defender Kiley McKee was one of many masterminds of an in-and-out run to keep the ball in play from last night. By the end of the first period, both teams were in a gridlock score of 0-0. It was an exhilarating sequence that spectators got to witness.

The second period got a little cold and it was not just the temperature change.

Coming back into the game, the girls had forty-five minutes to focus on a common goal: putting pressure on the ball. Midfield and forwards began to weaving in-and-out of the field in order to mislead the Warriors for a satisfying goal. “We don’t want to keep the ball too long, and not do too much on our feet,” junior Sydney Rohm said. A couple of minutes later, a free kick awarded to Waubonsie was missed and head-bounced into the goal. “We always say that we have to be resilient and bounce back, so after that, we grabbed the ball and ran back to the half in order to keep going. The game wasn’t over yet,” Rohm said.

With a little over twenty-five minutes left on the clock, the Mustangs rushed to get the ball going onto the other side. They quickly spiked through Waubonsie’s defense and initiated communication while urging to find the windows to score a goal. “We are doing a great job getting behind the ball, across in the box, and when it’s bouncing around in the box somewhere we need someone to go in and put their body in the line and put the ball in,” junior Nikki Coryell said.

The girls knew that there was no end to every attempt on trying to score a goal. Keeping composure and focusing on moving the ball inwards is an important mindset in a game with little time remaining. “When you’re down on on the second half, you need to stay calm. There is a lot of time, but a sense of urgency to get the ball forward more a little,” Coryell said.

Despite the loss, the girls demonstrated an angelic depiction of keeping the ball in play and opening up options for the ball to travel towards the net. Especially with many new athletes stepping into this year, the Mustangs have a power line up to benefit their game plan. “It’s a new team, and there are new people who can do different things,” Rohm said.

The team will play their next game against Batavia Senior High School this Saturday at noon.