‘Avengers: Endgame’ is a dazzling and lovingly crafted finale to a cultural phenomenon 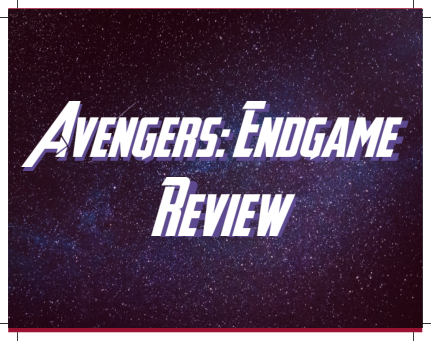 Enjoy freely! No spoilers ahead.

Jon Favreau and Marvel Studios released Iron Man in 2008, a movie that marked the beginning of an international cultural phenomenon, and would go on to forever shape the way modern cinema is created. Eleven years, 22 movies, and $17 billion later, Marvel has released their last movie in the epic Infinity Saga: Avengers: Endgame. Picking up where Infinity War left off, Endgame follows the original six Avengers as they scramble to find a way to resurrect the half of the universe that Thanos (Josh Brolin) killed with a snap of his fingers. Though the task of wrapping up a decade of culture-defining films may seem impossible, the Russo Brothers somehow managed to create a well-paced, heart-pounding, emotionally affecting film that will satisfy even the most die-hard of fans.

One of the aspects of Endgame that I was most impressed by was the pacing. As you may have heard by now, Endgame boasts a runtime of over three hours. With 50+ lead characters and countless franchises worth of plotlines to wrap up neatly, it would seem a given that the movie would be long, but I found myself surprised by just how well-paced the film was. In a drastic change from Infinity War (which felt overstuffed and rushed), Endgame slows down and takes the time to dive into its well-loved characters. Instead of a massive fight every 20 minutes, the movie gives a farewell to its core characters by giving each of the original six their own clear, developed emotional arc. In particular, I found myself impressed by the time spent with Hawkeye (Jeremy Renner) and Black Widow (Scarlett Johanson), who have been given notoriously little screen time in previous films with respect to the other four main avengers.

Speaking of the four main Avengers, get ready to be surprised by the direction that each character arc takes. Though you may be able to guess the general themes that the storylines of Iron Man, Captain America, Thor, and the Hulk follow, the actual plot that drove those themes forward was not the one that most fans will be expecting. As with Hawkeye and Black Widow, Endgame continues the trend of spending time to get to know and understand characters instead of just watching them fight CGI monsters, and I’d be shocked if anyone was able to correctly predict where Endgame finds Thor and the Hulk. However, a film is nothing without its leads, and the two characters the MCU has (arguably) been centered around, Captain America and Iron Man, are given a truly fulfilling sendoff. Since the moment he exploded onto our screens in Iron Man, Robert Downey Jr. has defined the MCU with his portrayal of Tony Stark, and Endgame is no different- perfectly utilizing Downey’s masterful capabilities as an actor to give real emotional stakes to an admittedly far fetched plot. Though I personally have never felt as much of an attachment to Captain America as I have to Iron Man, Endgame is also a beautiful conclusion to the story of Steve Rogers, and it is gratifying to see where both men end up once the end credits roll.

In terms of non-original six characters, Nebula (Karen Gillan), Thanos, and Ant-Man (Paul Rudd) were the three who received the most attention. Nebula, in particular, had a surprising (but not unpleasant or unwarranted) amount of screen time, and over the course of the movie, I found myself endeared to a character who I once considered flat and tertiary. Another character who the movie improved my opinion of was Brie Larson’s ever-controversial Captain Marvel. Though she was not in the movie nearly as much as one would expect given that her solo venture is the most recent Marvel release, she shows up for the perfect amount of time; serving her purpose when she is needed, and then bowing out when it is time to shift the focus to the more emotional narratives. Paul Rudd brings the laughs (as usual) to Ant-Man, but I will say I found myself a little disappointed in Thanos’ roll in the film. Without giving too much away, his presences felt very lackluster to me, and not at all like the cosmically powerful and deeply nuanced villain we met in Infinity War. The only other complaint I had with the film was that. Like all other Marvel movies, it could not quite resist the siren song of a third act battle against a massive army of gray aliens.

In the end, however, those small qualms are minuscule in comparison to the gargantuan victory that is Avengers: Endgame. Chock full of in-jokes, easter eggs, and deep cut comic book references, your enjoyment of Endgame will increase exponentially in relation to how big a fan of the franchise you are. Though Infinity War is, of course, required viewing to understand Endgame, those who find themselves dragged along by a loved one or group of friends will still be able to enjoy this fantastic gem of a film.