Boys’ volleyball digs into a heart-racing game against Naperville Central 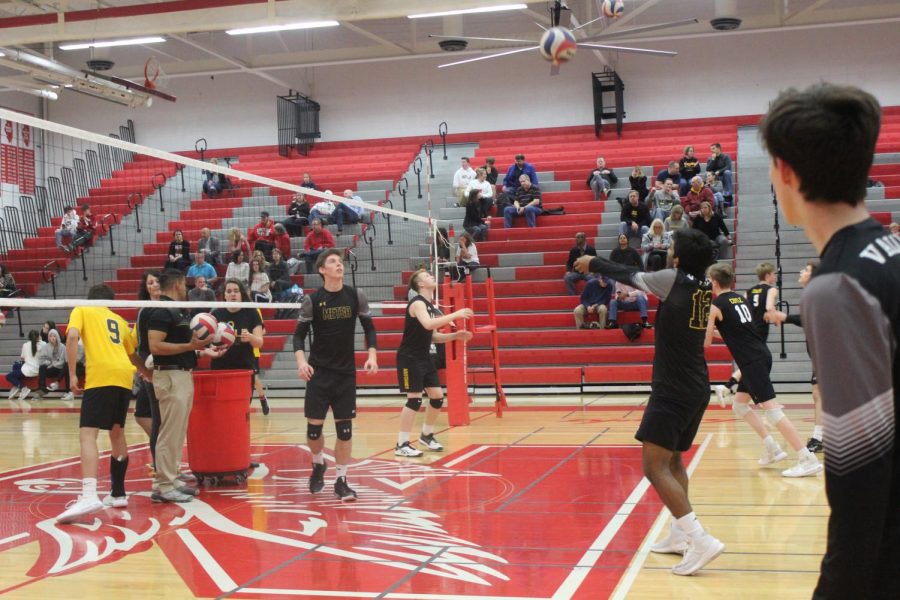 The Mustangs warming up before their match against conference rival Naperville Central.

Last night’s game for the boys ended in a close two-set loss against Naperville Central. A battling season to find their momentum this year made them want to push through the boundaries.

The first set consisted of the Redhawks leading the scoreboard. Deep serves and a killer defense keeps the Mustangs on their toes for the first half of the set. The Redhawks did not give up on the ball, and neither did the boys. Keeping a close eye on Central’s moves helped the boys pull through later on in the set. Defensive specialist Sunil Bhuvanagiri kept the ball in play with Central’s deep serves. Outside hitters Tj Steffgen and Ryan Owens went in for sharp attacks. “We wanted to come out hot and really wanted to come in with revenge, it’s that killer mentality,” Owens said.

The Mustangs and Redhawks were neck and neck in the second set. Feelings of adrenaline were present among the players. Yet there was composure during the race to who can save the ball at the lowest point on the ground. There was nothing but eloquence among the boys, and from that moment, it was flip of a switch to give it their final statement. “It’s all part of the game. The game is all about momentum and energy. Going back and forth is tough, but fighting for those two points makes it that much more valuable to the team, and you just have to capitalize on that,” Steffgen said. Keeping the ball in the air was a struggle for both teams due to the light touch over the net. Things got a little unlucky, and the boys were shy of two points 25-27. “With any sport, there are always things to improve on. I think one of the big things is being in the right spot and getting those blocks up. I know we’ve been practicing on our triple blocks and we need to implement those faster systems, and we’ll pull through in these games,” Owens said.

The boys did not grasp the ideal outcome, but, they learned to find value in “playing like they were in first, but training like they were in second.” Winning games is not a process done overnight, and it does not take the team chemistry alone. It is the integrity to play down until the last second. “I think not really caring who’s on the other side of the net. A team is a team, and no matter what we have to bring 100 percent,” setter Brandon Long said. In retrospect, their legacy will not be a team that can be a threat in the area, but the will power to bring the heat back on the floor. “It’s fuel and practice, we bring reminders of that last year, and it’s a rivalry between the boys. They really have self-motivation,” varsity assistant coach Gus Colima said.

They head into the Mustang Invite today at 5 pm, and tomorrow at 8 am.