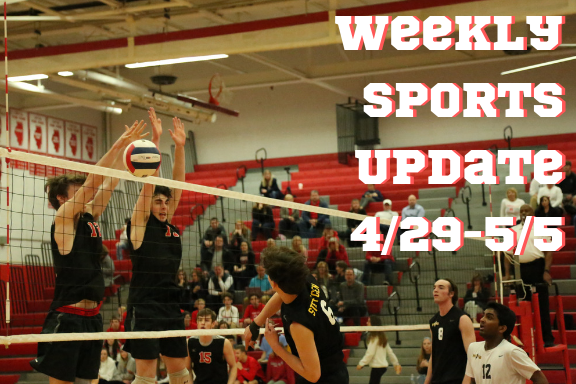 Interested in becoming a contact for your sport to get the most information out on Weekly Sports Update? Please contact the sports editor at [email protected] to help out in the spring season.

Last week the varsity team played Neuqua twice. They lost the first game 2-1 and won the next one by a score of 3-2. Their next game will be tomorrow against Naperville Central.

Last week the varsity team played Naperville North, winning 7-5. Their next game will be today at Waubonsie.

Last week the varsity team played against Naperville Central on Wednesday. On Saturday, they beat Downers Grove South 15-10. Their next game will be today against Geneva. The boys are currently 6-3 in the season.

Last week, the Mustangs ran at the Red Ribbon Invite. Varsity finished in 10th place with 36 points, all scored by senior Temi Osobamiro. The Mustangs also ran at the McCarthy Memorial Invitational. Junior Virgil Steward placed 2nd in the 100-meter dash. Senior Pryce Giwa-osagie placed 1st in the high jump. Temi Osobamiro placed 2nd in the long jump. Their next meet this Friday at Naperville North.

The lady Mustangs did not have a meet last week due to inclement weather. The Mustangs will host the DVC this Thursday.

Last week the varsity team played Riverside-Brookfield, winning 12-8. They also competed in their own tournament. They won the first game 11-1 against St. Charles East and beat Bremen 12-1. They play St. Charles North on Wednesday in the IHSA Sectional.

Last Tuesday the girls played Hersey and lost 3-4. On Thursday, they won against Riverside-Brookfield. The Mustangs had a Senior Night on Friday last week winning 8-7. On Saturday, the girls played in the Mustang Varsity tournament. Their next meet is sectionals will be today.

On Wednesday, the Mustangs visited the Hermes Elementary school to work with kids in the community! Later in the day, they played against Neuqua Valley on Wednesday and fell short 0-1. On Friday, they hosted Senior Night against West Aurora and won 3-1. The girls capped off the week with a tough loss against Wheaton Warrenville South yesterday 1-2. The Mustangs will play their next game on Tuesday, against Naperville North at 6:30 pm.

The boys traveled to Oswego on Wednesday. On Friday and Saturday, they participated in the Benet Academy Invite. They will host their next match will be today against Naperville Central at 4:30 pm.

The Mustangs hosted the game last Tuesday against Waubonsie. They won in two sets 25-10 and 25-18. On Thursday, they played Naperville Central and lost in two sets. Over the weekend the boys hosted the Mustang Invite. They came in second place in the gold bracket 4-1. Their next game will be on Thursday against Naperville North 6 pm.

Due to rainy weather, the two games that were scheduled last week were canceled. They will be playing two games on Wednesday.