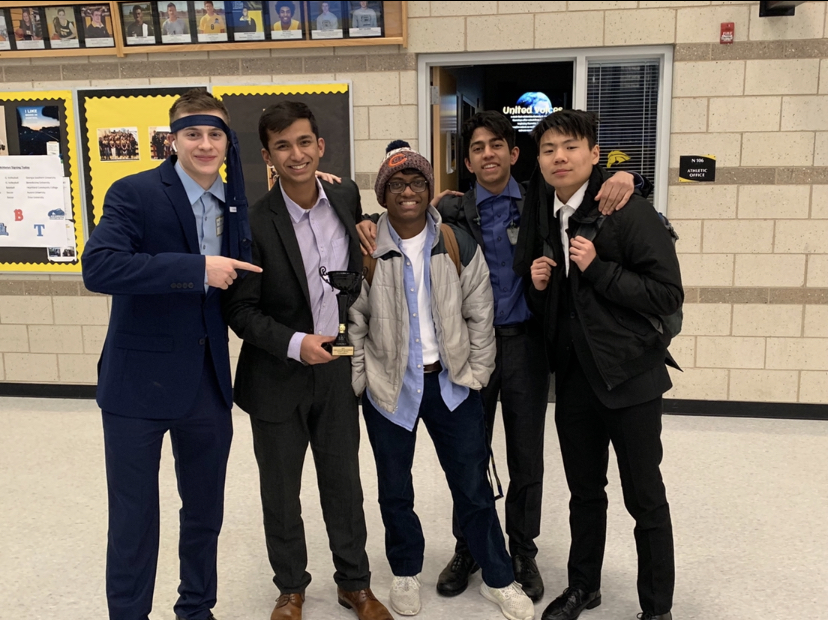 Ethics Club poses with their trophy after Regionals win

Less than a month of school is left for the 2018-2019 school year.  A variety of clubs at Metea Valley are reflecting on the past year and finding different and festive ways to bring to an end the time they’ve had together.

One such club is Ethics Club, the newly formed club this year with sponsor Mr. McCurtain, as well as the club founder and president Nikhil Basu.  Ethics Club is a group which hosts discussion and debates on any topic which has an opinion or ethic to it. Ethics club has participated in regional competition, hosted in downtown Chicago.  This following year is set to be at the University of Chicago, as well as the state and national bowl. One aspect of the end of the year of Ethics Club is the preparing for the start of many new opportunities for it to participate in.

“We plan to possibly host some mock competitions and debates throughout the summer to possibly entice more club members as well as prepare for the upcoming year. This would largely consist of cases provided by UNC (who runs the national high school ethics program) and would reflect either possible cases for the upcoming season, or possibly repeats from earlier years to give our members a sense of what next year could be like.” said junior and Ethics Club Board Member Ryan Owens.

Ethics Club expects many new promising members.  A hope for the club is to have a repeat national appearance and place higher in the next school year.  They seek to continue being an outlet to connect ideas from other disciplines into collective ideas, as they have done in their many weekly meetings and appearance at national events.

“Getting to talk with peers about complex topics and issues plaguing our country, to abstract ideas that challenge your perception, really helped me grow, not only as a person but as a leader.” Owens said.

Another club is Jazz Ensemble, which, despite not having a direct events at the end of the year, has many opportunities and goodbyes to be had.

“When I look back at the group, I feel very nostalgic of the memories I had, and I feel like this feeling is mutual for everyone else in the group.” said Sophomore and Jazz Ensemble member David Whang.

There are many events to be nostalgic about, including going to Oswego for the Vern Spevak Big Band, travel to Elmhurst for the Elmhurst jazz festival, and went to La Quinta Del Los Reyes for the Pete Ellman Big Band, all large and varying jazz events.

MVHS’s National English Honors Society (NEHS) finds itself at the end of a accomplished school year.  On only its second year, they have extended its beneficial impacts to the commons with the Word Wall during National Poetry Month, English classrooms with Poetry in your Pocket, and were available countless times to help students during their resource periods.

“Some [other] examples include assisting library directors at the Eola Public Library and promoting reading initiatives at Brooks Elementary School, along with hosting many in-school events, including “College Essay Peer Edit” (November and December), “Letters From Santa” (December), “Love Your People” (February), “Post-It Note Poetry” (April), and tutoring.” senior and Co-President of NEHS Jack Hurst said.

Available for incoming sophomores to seniors, and having already expanded its influence to across Metea and beyond, NEHS can be defined as a way to advance one’s English skills, and help underclassman and others outside of Metea.

“Having been in NEHS the past two years, I’m so glad to have been a part of such an amazing program, because it has allowed me to meet new people and make meaningful contributions within my community.  [To others] the time spent in this organization may seem like too much, but at the end of the day, it is very fulfilling knowing that one is making a positive impact in the lives of others.” Hurst said.

NEHS plans on continuing helping others and sharing the small joys of English and of building student morale and engagement in their third school year of 2019-2020.  It plans also to find new and better ways to impact the community through English.

“Though I’m sad to say goodbye to NEHS and the many people involved, I know that the new NEHS board next year will be very successful, and the organization itself will have a bright future as it keeps growing in the years ahead. Though NEHS has been at Metea for only two years now, it is clear to see that it has left its mark and will continue to do so due to such an amazing membership and sponsors.” Hurst said.