The origin and meaning of the Alma Mater 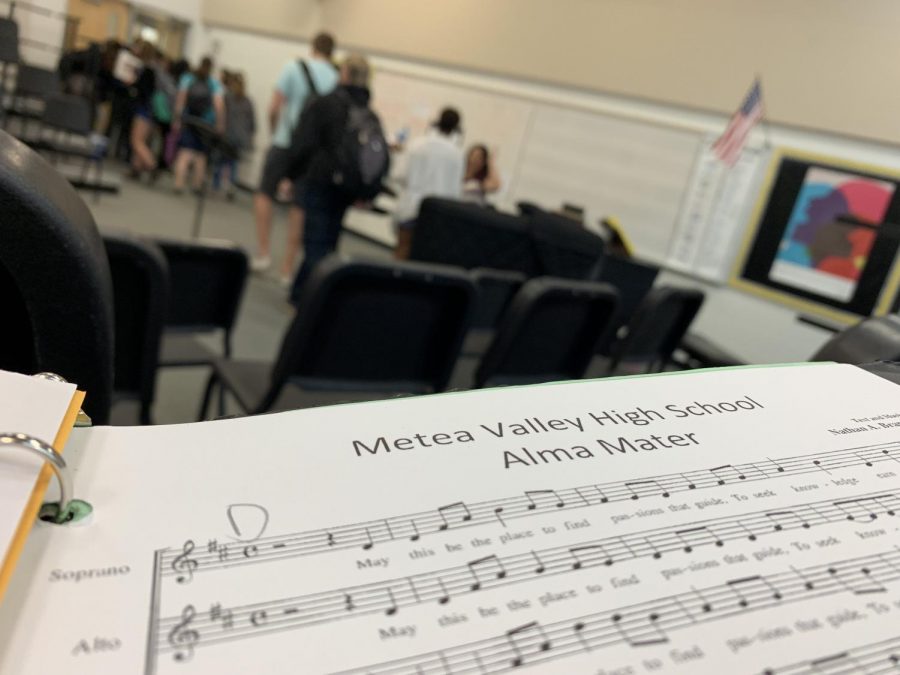 A physical copy of the Alma Mater, written and composed by Nathan Bramstedt

Our school, in its ten years, has often encouraged us to take pride in the school that we take part in. These themes are most evident with Metea Valley’s Alma Mater, a piece that has been sung by choir students during formal occasions like graduation ever since it first opened.

“May this be the place to find

To live with integrity and with pride,

And declare in unity

To all who enter these halls of right,

The Alma Mater is an original melody that was written and composed by choir teacher and theatre program director, Nathan Bramstedt. After being hired to work at Metea in 2008, he immediately began working on the song up to 2009, and the rest was history. The lyrics took inspiration from the Metea LIFE statement by the former Metea principal, Jim Schmid.

“There are four main sections of the Alma Mater. It is two verses and with four quarters each, so each quarter [of the song] is based on one of those Metea LIFE statements,” Bramstedt said.

Lyrics like “passions that guide”, “seek knowledge earnestly”, “ live with integrity and with pride”, and “declare in unity” are all directly based on this life statement.

While the song is an original melody, Bramstedt did take some inspiration from the Illinois state song, also known as “Illinois, Illinois”. He took a snippet of the first few notes of the song and incorporated them into the lyrics “Hail Metea,” further connecting the song to its Illinois roots. He also took some inspiration from folk songs with a more midwestern melody. He also described some of the songs being about horses, which seems to be a direct parallel to Mustangs, our school mascot. One notable decision that Bramstedt made early one was to write the score in a way that was timeless, so he made sure not to add any contemporary musical melodies.

“As long as the school is standing, this song will be sung here,” Bramstedt said.

One of the most complex aspects of creating the song for Nathan Bramstedt was finding the correct pronunciation for the word “Metea”. The name itself was based around Chief Metea, who was one of the principal chiefs of the Potawatomi tribe in the 19th century. In the spring of 2009, in order to ensure accuracy, he contacted the Potawatomi tribe directly in order to find out the accurate pronunciation. This helped him maintain accuracy and figure out the vowels he can use for lyrics.

“I sat at my desk and my piano and I just said the name a couple of times. I added the notes just so it felt in the same way that the voice might fall if you were saying,” Bramstedt said.

Bramstedt’s main goal with the song was so it could work for current students and alumni. He wanted to make sure that it had a hopeful message for those who are current students, but also those who graduated and want to wish that hope onto future students.

The song is meant to have a reflective vibe and unite the students of Metea into one voice. It allows us to feel more comfortable and prideful of the school that we live in, inspiring us to achieve all we can in our four years here.

“I think school songs really contribute to the pride of our students. We do have a victory song, and that is sung often at sporting events when we need high energy. But there’s the second half to our pride and that’s more of the reflective side and the side where we think about coming together in unity in really meaningful ways,” Bramstedt said.

The Alma Mater is able to bring back memories of their time at the school and realize that no matter who they are and what they do, their memories at Metea will live on.

“So I think the Alma Mater really speaks to that part of school pride. When we opened, there were no traditions. Those first classes had to create all of the traditions, so having a school song and an Alma Mater, that just helped provide a foundation for them to feel like we had a school identity,” Bramstedt said.