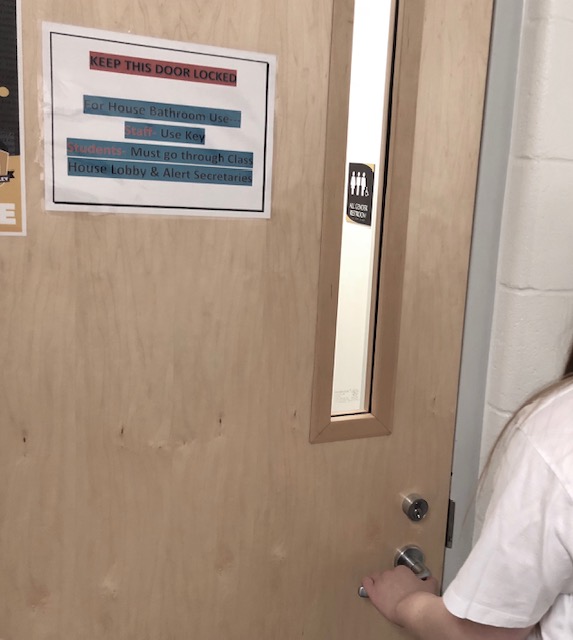 Metea Valley administrators restricted the use of gender neutral bathrooms that are attached to each of the class houses as of Monday, May 6. These bathrooms were previously open to any student, but were locked from the outside due to restrictions on who enters the bathrooms at all times.

“We think that by locking the outer doors so that there’s a little bit more control of who is using the washrooms, we can minimize the damage and just trying to protect the safety of everyone,” Dean Matthew Walpole said.

Students were freely using these bathrooms when necessary after the locking of other bathrooms in the school, so administrators decided to implement a new policy requiring students to sign in before using gender neutral bathrooms. Students can still use these restrooms, however, they need permission from guidance secretaries in each of the class houses.

“At times, since we have been having to lock bathrooms in the locker banks, there has been more use to these [gender neutral] bathrooms, so I do think it affects a lot of different students and staff members as well,” Walpole said.

Even though the administrators of the school do not think that this is a problem for students at the school, it is causing many issues among students. Students that feel the need to use the gender neutral bathrooms now have a hard time using the bathroom in general. Also, students that are affected by the general closing of bathrooms in the locker banks have a harder time using the bathroom when they need to.

It is a convenience for students that feel as though they don’t fit in either of the gender specific bathrooms. Danny Anderson is a junior at Metea Valley. In Anderson’s case, he is at the point in transition where he does not completely pass as a man, but does not look like a girl either. He gets questioning looks regardless of the bathrooms he goes into. Having the gender neutral stalls was convenient for Danny and others that are in his case.

“Nobody else has to go into the main office, sign your name and the time you enter and leave just so that you can take a pee. It’s annoying and, honestly, embarrassing,” Anderson said. “They keep track of how long you’re in there too. I shouldn’t have to be interrogated on why it took so long for me to use the restroom. That’s just humiliating.”

Other students also believe that Metea Valley does not care about the well being of their students, which is reflected through what they have done with their bathrooms.

“Metea acts like it cares about more issues such as putting tampons in the bathroom or having gender neutral bathrooms, but they don’t refill the tampons or the pads in the bathroom and then they lock the gender neutral bathroom. So, I don’t really understand why Metea is making these huge deals about incorporating these things but not maintaining them or allowing access to them,” senior Naomi Douglas said.

Students hope that administrators at Metea realize the problems that they are causing with students and find better ways to solve these problems.