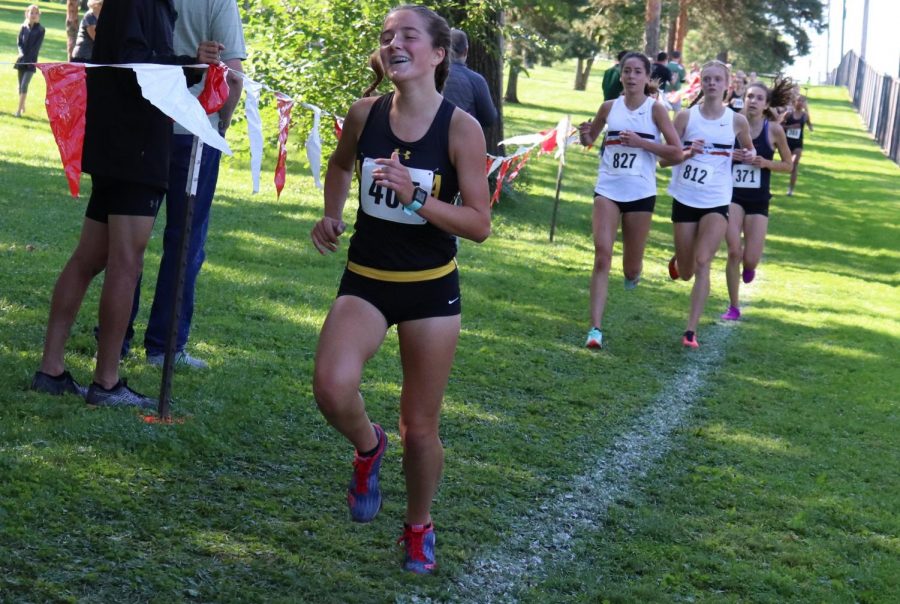 Hundreds of fans came out to watch and cheer on girls’ cross country at the Hinsdale Central Invite last Saturday. The Metea girls raced the three-mile course at Katherine Legge Park and competed against cross country teams from around the area. The Mustangs placed ninth overall as a team.

Coming into the race, the team had a few expectations. “We would love to be in the top half of our conference,” assistant coach Alyssa Schneider said. With many teams from the DuPage Valley Conference competing, the Mustangs were determined to outperform their division rivals as they always have been hard competition in the past. They knew their rivals would end up being tough opponents.

“Some of the top teams in the state like Naperville North and Central are in our conference,” Schneider said. With top schools attending the meet, being tough competitors would be important for the Mustangs. They would need to compete as a team to perform well at the meet.

Metea’s runners showed improvement at the meet by working as a team and becoming more team-friendly. Some division rivals still managed to give the girls a tough time. “Neuqua was really close to us, they beat us by a few points, they’ll be competition for us for the rest of the season,” senior Sophia Sandy said. The Metea girls showed great effort, coming in ninth as a team in the race. “We maintained a good team effort, even if everybody didn’t have their best race,” said Sandy. Regardless of the outcome, Metea’s runners had a positive outlook on the race, even with teams like Neuqua having better times than the Mustangs.

Though the team made good strides at the meet, they also had some goals for future meets. “We want to stay together, compete better, and stay healthy for all the other meets,” Sandy said. The team really wanted to be together and show that in their upcoming meets. Not only the competitions themselves, but togetherness and teamwork will become a large part in future meets for the girls.

The Mustangs have their next meet at Peoria High School on Saturday at 9 am.