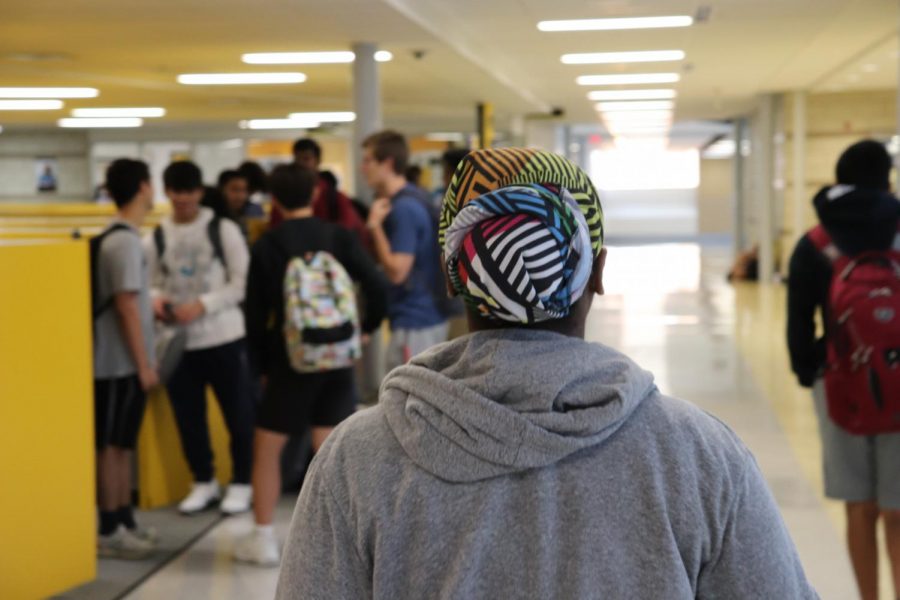 Over the years, durags, wave caps, scarves, and African headscarves were added to the list of head coverings that students cannot wear. However, some students think students should be allowed to wear culturally significant head coverings.

“The policy is very discriminatory and kind of censoring,“ junior Justin Campbell said.

Campbell and other students said that the policy is interfering with their ability to freely express themselves. They see the policy as unnecessary, directed towards one race, and culturally insensitive.

According to the school handbook, “Headcoverings must be removed upon entering the building.” The handbook defines head coverings as hats, hoods, headbands, rolled or unrolled bandannas, and wave caps. Religious head coverings are exempt from this policy.

Dean Kim McElroy cites student safety for the reason that head coverings are not allowed.

“We need to be able to identify your entire head and your entire face at all times. This is for your safety, protection of the staff and the school,” McElroy said.

Professional etiquette is another reason why hats are not permitted in school. Principal Dr. Darrell Echols explained that taking off hats and hoods in a building is an old custom, and many schools still follow through with the rules.

”It was an old custom in which is attached to chivalry. It has always been a policy in school buildings,” Echols said.

“It’s a cultural thing. We wear our headscarves and head wraps to keep our hair in order. It ties to ourselves and to where we are from,” Campbell said.

Some students believe that the policy and race tie together in a negative way.

“They associate durags with negatives, and that’s why we can’t wear them, but in reality it’s to get a hairstyle,” junior Tia Stewart said.

Dr. Echols has been receiving the feedback on the issue at hand and he doesn’t see it nor does he want others to see it as a race thing. “This is not a black or white thing,” said Echols. “This is something that has been customary in schools and in government buildings in general.”