Is a gap year right out of high school worth the risks? 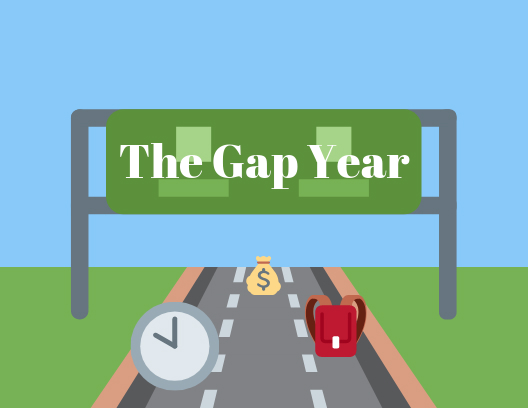 For most seniors at Metea, the next step after graduation usually involves attending a university or college and continuing their studies through the first four years of school. Many are raised on this expectation as young adults and the majority of the time, they don’t once consider any other alternatives. But the conventional track norm is changing- and with time, students are starting to explore different paths to their futures and ideal careers.

Some can agree that the “gap year” has not always had the most positive reputation. For years, what is usually a period taken by high school graduates between secondary school and higher education was instead seen as a break for unmotivated teens who were not quite ready for college. At first thought, the idea also seems to pose more risks than benefits to students. Most reasons for not taking a gap year include steep expenses for programs, falling behind other kids in school, and not pursuing an education further. As senior Morgan Carioscia has been considering taking some time off before university, such fears are very much present in her thought process.

“I initially discovered what a gap year was after seeing someone I that I knew move to Poland for a year to travel and take a break for herself,” Morgan says. “I have the travel bug at the moment, but would use up the time to work in order to have more money for schooling. I plan on attending a community college then transferring after two years, however, if I decide to take a gap year, I would choose to start a four-year college right off the bat. I am leaning more toward not taking a year off mostly because it would equal me staying in my hometown for an extra year, which most definitely would be the last thing that I’m looking for.”

On the other hand, Spanish teacher Brandi Bane, who deferred her admission to college until the age of 21, believes that students can find great success in using time before college to gain real-world experience. Though she participated in an exchange program in Spain during the first semester of her high school junior year, Bane mainly speaks to the point at which she traveled and entered the workforce in a dentist’s office post-graduation.

“I would totally recommend a gap year for high school students because I think that it gives everybody a very different perspective on things and personally, I wouldn’t be doing what I’m doing today had I not done [one] at that age,” she said. “I think gap years can compensate for lower GPAs and test scores because you are going to get some real-life skills, and you are more mature and learning in a different environment when you’re actually out there doing things. I think that for kids who the conventional high school setting really isn’t for, they can really gain a lot that will make them successful, and if colleges look at that aside from just looking at their test scores, I think they’re going to find that those students are definitely going to make it more worthwhile because they’re going to see the benefits of already having experienced the real world,” Bane said.

Though every college is different, many universities, those most known belonging to the Ivy League such as Harvard and Princeton, highly encourage their applicants to either apply after a gap year or delay their attendance in order to gather valuable insight that could enhance their performance in school. Other colleges that speak to this mission also include American University, Florida State, Carnegie Mellon, the University of Alabama, and John Hopkins University. Some schools admissions offices may even offer merit-based scholarships and financial aid to students based on the numerous credentials a gap year can earn them.

What a student ultimately decides to do during his or her gap year will vary extensively. While many will seek to travel from country to country while they still have the chance, others will stay in their hometown to work a job in order to pay for school or take general education courses at a local community college. Either way, this allotted time gives applicants a chance to prove their independence and responsibility while also allowing themselves to refuel after what tend to be an exhausting four years of high school.

Academic standards seem to be becoming ever more ruthless the more America’s education system develops. Career exploration may appear to be all the more unexciting as college admissions become a fight to the top for the most prestige. The future calls students to take up the rigor of the best universities immediately after they’ve just attended their first proms. But there are other ways for hopeful graduates to fulfill these great aspirations- and they are making it to these heights in more ways than one.