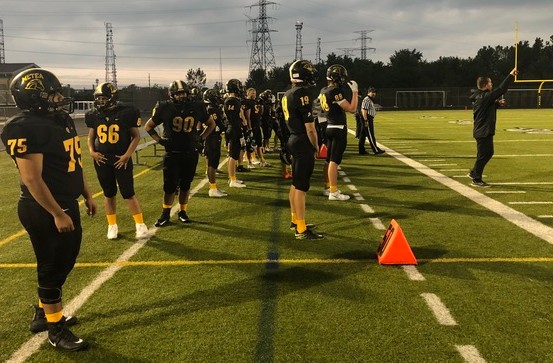 The varsity boys' football team gather on the sidelines during Friday night's game.

Homecoming weekend had a chaotic start, as the football team played their homecoming game. The game took place on Friday against DeKalb where multiple delays took place. The game was continuing over two days, both Friday and Saturday. The Mustangs (1-4) played the Dekalb Barbs (3-2) losing in a hard-fought game 30-31.

Leading up to the game, the team embodied the homecoming spirit. “Everyone gets hyped up from all of the events in school, that lead up to the football game,” senior right tackle Jake Paulline said. Even though there was a pretty small crowd, the Mustang fans showed their expressive spirit in cheering on the Mustangs. Homecoming also has a meaning to the team.

“The meaning of homecoming is where our soldiers came home from war, so we explain this to our kids.” Head Coach Parpet said. The purpose of playing the game was key for the team.

The team was determined to play well against Dekalb as they came into the game. “We’re just trying to make sure we stay focused and do what we’re supposed to do.” Senior wide receiver Keshawn Baker said. After a back and forth start to the season, the Mustangs wanted to play a top-notch game against the Barbs.

After the first delay, the game got off to a quick start as senior running back Elijah Wright scored to the Mustangs up seven to zero at the end of the first quarter. Yet, DeKalb tied the game up only a few minutes into the second quarter. Senior safety Ryan Bingham scored one of the highlights of the game with a 76-yard interception returned for a touchdown. Though DeKalb marched right back down the field and the game was tied 14-14 at the half.

The third quarter was even with both teams scoring a touchdown each to make the score 21-21 at the end of the quarter. The madness came to an all-time high in the fourth quarter. DeKalb went up 21-24 with a long field goal a few minutes into the fourth. With a good return from the Mustang’s receiver and running back Colin Wilcox, the boys ended up scoring with a field goal to tie the game once again. The Barbs then scored a touchdown with time winding down in the fourth. Metea’s odds looked bad, but a long touchdown pass to Colin Wilcox made the score 30 to 31. With a gutsy call, the Mustangs went for a two-point conversion, but the attempt was no good. There was still hope for Metea, as they recovered an onside kick with a little under two minutes left in the game. Though on fourth down with little time remaining, a pass just slipped through the hands of the Mustang receiver, ending the game.

“This was one of our best games we ever had on offense and defense,” Wilcox said. Both players and coaches felt the team showed drastic improvement in the close game. “I was very proud of our guys, we just ran out of gas there at the end,” head coach Parpet said. Though the tough loss hurt the team, they are ready to prepare for next week’s game. “We need to take care of each step, one at a time, and we’ll just go from there,” Coach Parpet said.

The Mustangs play an away game against Naperville North High School this Friday.