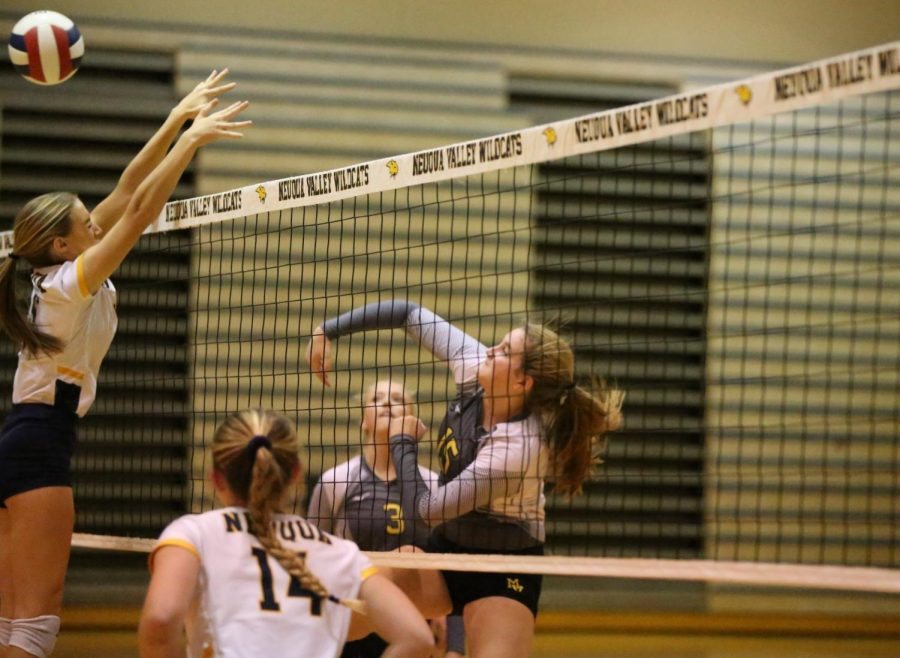 No. 15, middle hitter, Keira Jannisch, goes for the kill during the first set.

The sound of a kill is music to every team’s ears, and both Metea and Neuqua have strong outside hitters that racked up plenty of kills last night. Despite both of the teams’ intensities, the Mustangs fell short and lost in two sets, 16-25 and 20-25 from last night.

Within the first five minutes, the girls got a leg-up from an ace by Morgan Rank and numerous kills with the offensive line.

“We knew the way they [Neuqua] played, and that is what we practiced. Coming into this game, all of us wanted to get revenge on them, and we knew that we could do it,” sophomore floor captain Regan Holmer said.

Metea was up by four in the first set, but they got too comfortable. Neuqua took control over the court and scored multiple aces. The points began to stack up to tie the teams 8-8.

“Everyone came in ready to go and work hard, but in the first set, we were not clicking and doubting ourselves,” senior captain Cora Ondrus said.

Neuqua had the perfect recipe to dominate the game. Their strong outside hitters controlled the attack, and their quick middle hitters wove through the court when needing an assist. The Mustangs attempted to combat Neuqua’s scoring streak throughout the first set, but the defensive line had loose threads.

The Wildcats continued their streak by positioning their hitters away from Metea’s defensive specialist, Morgan Rank.

“They kind of put us on our heels and put us in a bad position,” head varsity coach Dave MacDonald said. With the isolation of Rank’s defense, the Wildcats went aggressively towards the middle, repeatedly slip through the Mustang’s hands.

Moving into the second set, the Mustangs brought back the heat. Outside hitters Cora Ondrus, Gabriela Zawadzki, and Maura Pilafes led the Mustang offense. The new energy took the team up by 10 in the first half of the second set. The Wildcats did not want to settle, and they countered in keeping their offensive line quick to the ball.

Mustang middle hitters Keira Jannisch and Emily Day went to play at the tips of the net and kept the team away from trouble, but it was not enough to keep the Wildcats away. The teams took turns fighting for the lead, a high-scoring second set.

Ultimately, the girls fell back and gave Neuqua a chance to overturn the control. Neuqua needed to gain three more points to secure the match, but the Mustangs did not end the fight there.

Outside hitter Sam Rueda entered the court for the black and gold, but her initial kill to bring the energy back wasn’t enough to lift the Mustangs past the Wildcats, losing the set 20-25.

“We are going to go pretty hard [practice]. We are going to be focusing on the things that we were breaking down at,” sophomore captain Morgan Rank said.

The girls hope to bounce back against Waubonsie Valley High School tomorrow night. They begin the night in celebrating the eight seniors at 5:30 p.m.