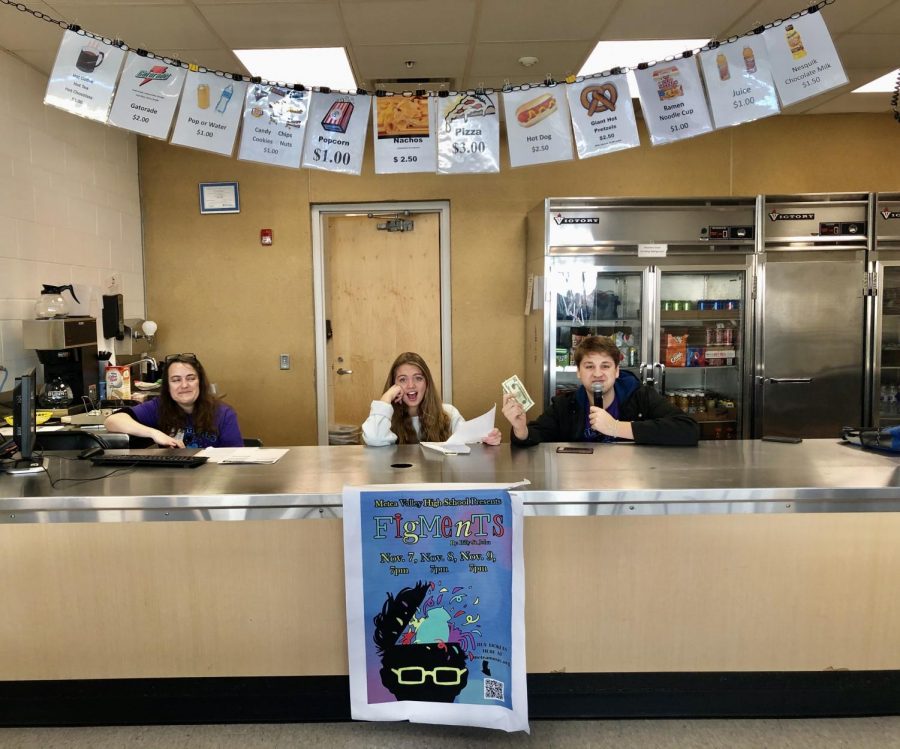 Parent and student volunteers sell tickets for the play “Figments”

Metea is school with something happening nearly every week, whether that be a sports event, guest speaker, or even a music or theater event. One of the ways to get the word out about new events is through announcements. Often they are just though posters on the wall or announcements over the loudspeaker.  When senior Roger Valdes gave an announcement at lunch about buying tickets for the fall play, the last thing he expected was for another student to throw a lunch bag at him.

Every day, those selling tickets for the fall play during lunch last week gave the same short announcement behind the counter. On this particular day, Roger received a lunch bag to his head instead of receiving positive feedback for the theater announcement. A student sitting at a table a few rows away had struck him with their garbage.

“We do the announcement behind the counter and then we just go on our day. But that day, a kid about two tables away threw a lunch bag at my face. They hit me right in my forehead,”  Valdes said.

Students like Valdes are wondering how much authority lunch monitors have over students. According to Valdes, instead of them taking any immediate action, those responsible for the bag throwing went an entire day without disciplinary consequences. It was the next day when enforcement measures were taken.

The following day, the deans designated for that period came over and escorted the offenders out of the lunch room. These students will remain nameless to protect their anonymity. Despite their lack of immediate action, there was still some sort of eventual enforcement. The supervisors are recognizable staff that monitor and tell people to sit down when they are standing up or to quiet down when they are being too loud. Despite their duties, they are limited in their abilities to stop harassment.

“If it’s never reported, that’s the kind of thing that’s very difficult for teachers to see, even in a classroom,” chemistry teacher and lunch room supervisor Stephanie Stout said.

When Valdes was hit with the lunch bag, he claims the supervisors did not act right away, even though they were present.

“Sometimes teachers like to protect these kids, either because they might act out or because they happen to do something stupid. For them it’s just children,” Valdes said.

Some teachers responsible for looking out for students acknowledge that they are doing their best to prevent harassment or violence, but they also feel it is difficult because of a lack of official monitors each period.

“We’d love to have more teachers, but there’s only so many teachers to go in any given period. We’ll just be doing the best we can with what’s given,” Stout said.

There was quite a bit of protest among members of the fall play after the altercations in the lunchroom. The actors were particularly upset with the treatment of their castmate, especially since they know how difficult it is to speak in front of hundreds of uninterested high school students.

This is not the first time people have felt disregarded while giving announcements in the lunchroom. During Mustang Live, those who choose not to listen have been known to groan, walk away, or just not pay attention.

“It is tough to have everyone involved in listening,” senior MC Rissa Bajusz said. “It is a loud lunchroom so it is easy to be ignored.”

According to Valdes, this lack of respect towards peers and lack of immediate action by supervisors is an issue that needs to be resolved in a way that benefits everyone.

“I think some people don’t recognize those around them are people. If you put good attitude and good positivity into others, they will do the same,” Valdes said.