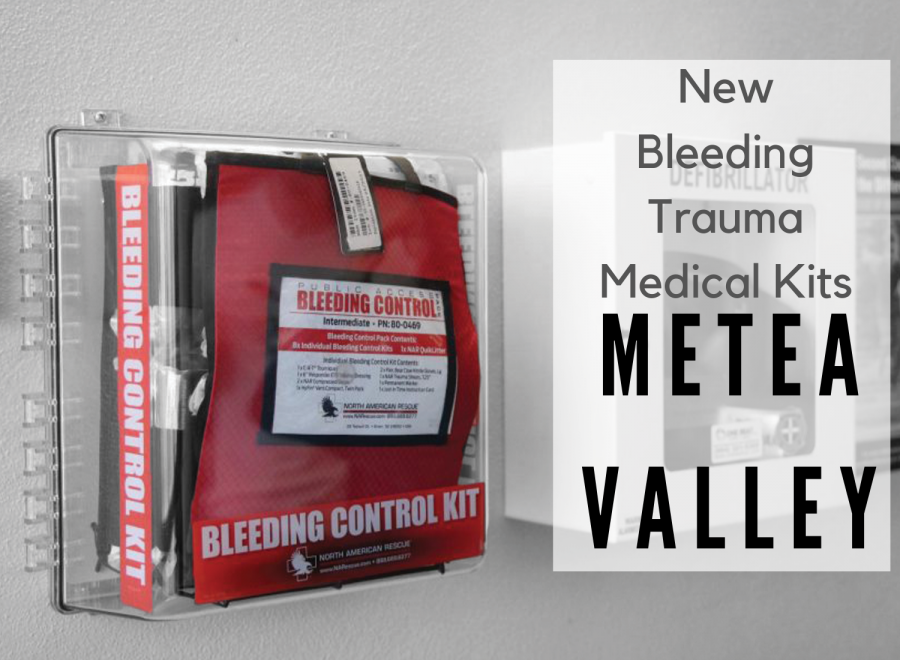 Illinois school districts are receiving materials for emergency situations that involve uncontrollable bleeding, to take part in the National Stop the Bleeding campaign. Once involved, each school receives a small professional tourniquet, gauzes, or instructions on how to stop deep wound bleeding. The training, is currently only given to administration, specifically Principal Dr. Darrell Echols, Certified School Nurse Elizabeth Grant, and the rest of the nurse staff at Metea.

The Stop the Bleeding campaign coincides with the Hartford Consensus Committee where the main message is to keep the general public safe. Through this they bring awareness to how bleeding to death in serious situations can be avoided with more public knowledge on how to prevent it. Training, provided by the campaign and other organizations, which consists of teaching how the tourniquet can be appropriately used in relation to where the deep cut or wound is on the body. This is taught to keep an injured person alive before any professional help comes. The training is led by medical professionals that could include emergency care workers, nurses, and others in that field. The training lasts about an hour or two. Anyone can take the classes, but the legislative act only requires Illinois school districts to train administration.

“Where they are starting is first with the certified school nurses and the building nurses and then onto all the principles in the district. Each school is going to try and offer that same training to their teachers and staff members that haven’t been done yet to see whos interested and who would like to learn,” Grant said.

Although the tourniquet and gauze kits are at the introductory stage amongst administration, this does not say that students cannot take part in knowing more about what to do in critical conditions in and out of school. All citizens are protected under the Good Samaritan Law, which means that liability is not put on the person who attempts to give reasonable aid to a person in need. This law can lower the hesitation found amongst the bystander effect in critical situations. For now, students will not be involved in the training or responsibility of knowing where the kits will be located but in the near future, however, that may eventually be a possibility.

“I think at some point, I’m not sure whether, through P.E or Health, they will want to talk to students about how to stop bleeding in emergency situations,” Echols said. “My goal is to have over 80% of our staff go through that training. We will try to do that training during the institution days that are days off for the students in January”.

Alongside the training, there are pamphlets with clear instructions and visuals made by the Stop the Bleed campaign. They give a brief overview of the order steps to be done, along with a very descriptive overview of each step. Although the pamphlet gives directions with specific medical tools, items such as the gauze can be replaced with cloth or tissue if the material is not accessible at the given moment.

“The first step is to call 9-1-1 if you see someone bleeding profusely or with a deep wound. Then you survey the scene and look around to make sure it’s a safe scene for you to enter and then you apply pressure and pack the deep wound with gauze. If the wound keeps bleeding that is when you pull out the tourniquet and it should stop the bleeding. This keeps them safe while you are waiting for the EMS to respond,” Grant said

The awareness of school safety is something that has been put under the spotlight in concern to social issues such as mass shootings in schools or public areas such as the shooting that took place at Saugus Highschool in California on Nov. 14. The bleeding kit program in Illinois was put to action shortly after the new ALICE training that is being taught this year. The kits are not made for the specific purpose of aid during or after a mass shooting, but for critical situations in general. School districts want to take extra precautions for any situation through awareness of what to do and what can be done in the future.