Pokemon Sword and Shield is disappointing yet enjoyable. 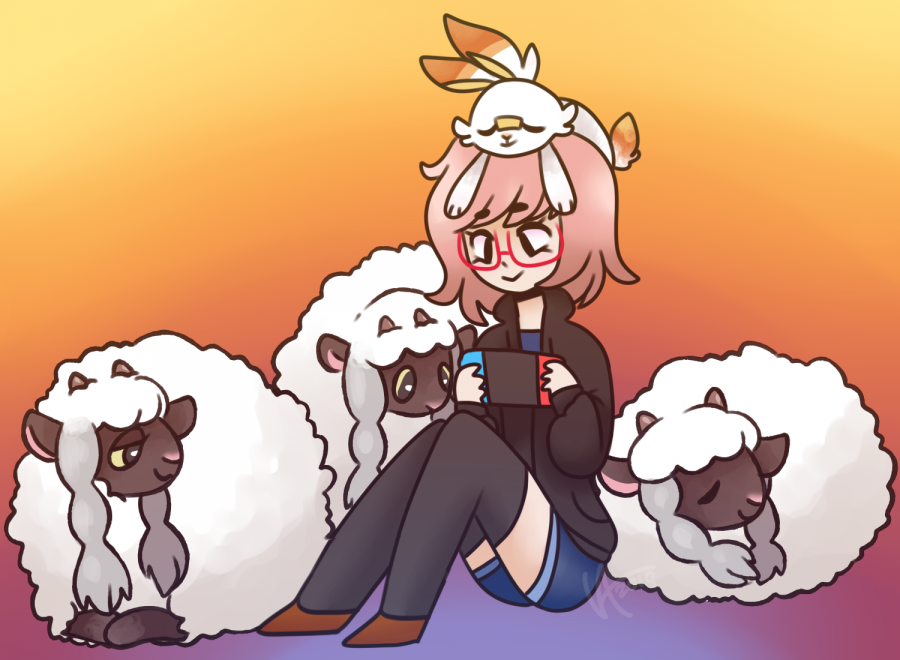 Ah yes, the long-awaited release of Pokémon Sword and Shield has finally arrived. On Nov. 15, the duo of games was sent out to fans across the globe. But was this new addition to the franchise worth the wait? It has been almost three years since the release of Pokémon Sun and Moon, which were the last mainline games. Since then, Sun and Moon Ultra as well as Let’s Go Pikachu have come along, in hopes of stalling time for the Switch only release to come in 2019.

Many long-time fans are disappointed by the number of classic Pokémon that were removed. Only 80 new Pokémon were introduced, leaving around 400 out of the total 800. Many are calling this the ‘Thanos snap’ since it seems that random Pokémon were cut. Classic Pokémon such as almost every starter from generations one through seven were removed, and yet pointless ones such as Bronzor and Gurrdurr remain. A full list of the Pokémon remaining can be found here. As a fan of the series since I was eight, it’s shocking to see such a highly regarded game with beautiful graphics and a varying fanbase, become so malnourished. The map itself for the new game is estimated to be quite small: nothing compared to Breath of the Wild, of course. It aims to be an open-world game but has too many limitations to even come close to the standards that switch players have grown accustomed to. There is no difference between the two games, as usual, save for the legendary Pokémon you encounter at the end.

Thanks to the graphic capabilities of the Nintendo Switch, the graphics for Pokémon Sword and Shield are beautiful. Filled with various landscapes, weather changes, and great textures, Sword and Shield is filled with brilliant colors and designs. While it visually stands out from all previous games in the franchise, I feel like the battle menu is missing something. The new battle menu style is minimalistic and clean but personally, it doesn’t match the magical and ancient world of Galara, which is based on the British Isles. On a personal note, I really miss the hand-drawn character cards that died when 3D animation totally took over. The developers have made up for this however, by changing hair and skin colors so that you don’t always encounter the exact same person. I would also like to point out that I love the use of small pixelated sprites in some menus. It relates the game back to its origins and incorporates 2D in a nostalgic way. The new ‘Dynamax phenomenon’ replaces older versions such as ‘Z moves’ and ‘Mega Evolution’.

Another big downside is that you can no longer port Pokémon from previous games. Looks like your level 100 Arceus is going to have to live in that 3DS XL forever. This is mainly due to the console jump, as well as the fact that over 400 Pokémon are no longer included in the game. You can, however, replace all those lost Pokémon with mods. Complete character customization is once again an option and a well-done one at that. With massive amounts of clothing options, hairstyles, and even facial adjustments. You will no longer have that constant, expressionless, dead-eye-glare. In the spot of the training mini sessions from previous games, you can send your Pokémon out on missions, in order to help the community. I personally love this, it encourages players to volunteer in a subtle yet effective way. Also, have I mentioned you can cook with your Pokémon? At any time, you can set up a tent and relax from the heat of battle, playing and entertaining your virtual friends. This reminds me so much of my childhood Tamogachi and brings the player closer to their virtual partners.

When you begin it seems like nothing is new: the same opening scene explaining Pokémon and introducing the champion. The player is then introduced to your best friend Hop, whose brother is the champion Leon. There isn’t much that can be learned from this small meeting except that Leon loves snapback hats. His walls are actually covered in them, along with the typical big-brother weight lifting gear. We eventually meet the man himself, who is just really eager to get rid of those adorable three starter Pokémon he’s been lugging around. I chose Scorbunny this time, even though I tend to choose grass. Mainly because I didn’t like the final evolutions for all others. Sobble just gets edgy as Grookey turns into a buff drum player. I named my Scorbunny ‘Flops’ as Hop chose Grookey, which I found interesting. See, the rivals usually choose the type that’s most effective against yours. He should have chosen water if this game was to follow tradition. I found this weird because Hop’s decision will inevitably make the game much easier. Every time you fight him, you can easily destroy his level 10 Grookey with a fireball. I’m not sure why the creators made this decision, because the game is easy enough as it is.

The next big step after fighting Hop is saving an escaped Wooloo, who is objectively everyone’s new favorite Pokémon. As the story plays out I’ve noticed that all the characters speak in British dialogue with words such as ‘mum’ and ‘mad’ strewn about. When crouching through the tall grass some Pokémon can be found hiding, and make surprise attacks on you. Out of the mist, the legendary Pokémon from the cover attacks? This is a definite first for the series. As this creature spews mist, you blackout only to awaken to Leon. With a powerful and compelling start like this, I am excited to casually play through the remainder of the game. In the first day of owning the game I finished the first gym challenge which to my delight, did involve element-based puzzles. I was concerned about the lack of design shown within the gyms, but was relieved to be chasing Wooloo through a maze just so that I could fight Milo, the gym leader. The new ‘Team YELL” is similar to Guzma’s team in Sun and Moon, with a punk-rock vibe. The leader, Marnie, is your typical overly-powerful and edgy teenager who is just ‘misunderstood’. Though their personality is charming, they lack motivation, seemingly bandwagoning together. They also, once again, have the weakest Pokémon as their trademark: Zigzagoon, a normal type based on a ferret whose main move is ‘tackle’.

I honestly love this game so much. I was not expecting greatness because of all the negativity I’ve seen online but I was pleasantly surprised. Most people who anticipated the game already have it on pre-order or are planning to buy it no matter what. Pokémon is an overly-exploited franchise and always has been. But to all those that purchase Sword and Shield, you won’t be disappointed. Not by the graphics, or the characters, or the storyline. Not even by the missing Pokémon.