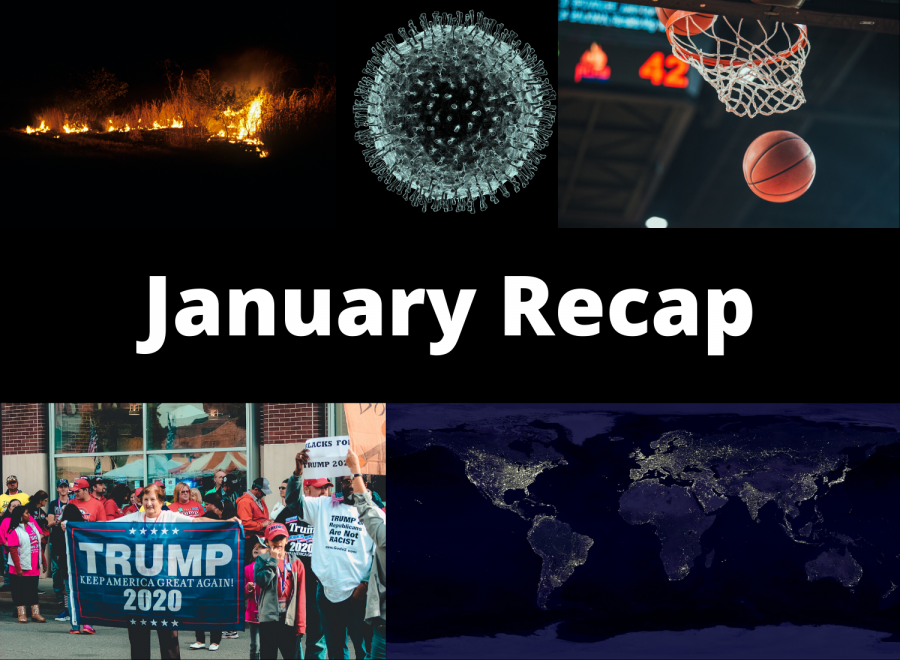 2020 started out with upward of 11 million hectares of Australian land destroyed by bush fires. How the fires started varies from case to case, but the fires are fueled in part due to climate change. Australia’s mean temperature has risen significantly, with 2019 being the hottest year yet. The fires are still burning now, but they have less intensity. Australia’s Crisis Coordination Center reported 33 total human deaths alongside the thousands of native plants and animals.  Thousands of animals have been displaced or injured as well. The world provided support in spades, with big names celebrities donating money toward the aid effort and groups like the Australian Red Cross providing aid at ground zero. As the fires still burn, Australia will eventually recover, but not without massive losses.

The 2019 Wuhan Coronavirus has been in news headlines since its first appearance in Wuhan, China. The virus spreads through interpersonal contact, and it transmits through coughing, sneezing, and other respiratory droplets. On Jan. 9, China announced the first fatality, and as of Feb. 3, there have been over 350 deaths and an estimated 17,000 cases worldwide. The first United States case was on Jan. 20 reported in Snohomish County, Washington. As of Jan. 31, there have been two cases of the virus in the Chicagoland area. The first was reported on Jan. 24. Several steps are being taken in order to limit the spread of the disease worldwide. Chinese officials quarantined Wuhan on Jan. and are in the process of building a hospital to care for those afflicted with the virus. Several other cities in China are on lockdown or have strict travel restrictions placed on them. Many major airlines have suspended flights to China. Three major airlines, American, Delta, and United, have stated that they will end travel between the United States and China until at least March or April. On Jan. 30, the World Health Organization declared the Coronavirus a global health emergency.

In the days leading up to the turn of the decade, it turned for the worst. Tensions rose between the US and Iran regarding the death of Qassem Soleimani. While many first world countries like China and Canada spoke up about their concern, many young US citizens turned to Twitter to voice their opinions, and thus began the plethora of memes. Many made jokes about being drafted for World War III, using the hashtag #WWIII. Thankfully, the US abolished the draft, known as conscription, after the Vietnam War, but the meme rose to popularity nonetheless.

Basketball star Kobe Bryant died in a helicopter crash along with his daughter, Gianna Bryant, and seven other people. The helicopter was flying in Calabasas, California on the way to Bryant’s daughter’s basketball tournament on Jan. 26. The death of the famous athlete was met with a great number of responses and tributes from people around the world. Along with messages from fans, friends, and family towards the former NBA star, tributes to him and his family were given at the Grammys, the Super Bowl, and at Los Angeles City Hall.

Over the past month, the impeachment saga has reached its culmination as Democrats attempted to and will most likely fail to remove President Donald Trump from office. Following a vote along party lines to impeach the President within the House of Representatives in 2019, 2020 saw the start of the Senate trial to impeach the President. During this process, former secretary Jeff Sessions’ book was leaked and sections pointed to him admitting that President Trump had established a quid pro quo with Ukraine. Despite this, Senate Republicans succeeded in denying the Democrats more witnesses for the trial and it is expected that they will vote to acquit the President in Feb. 5.