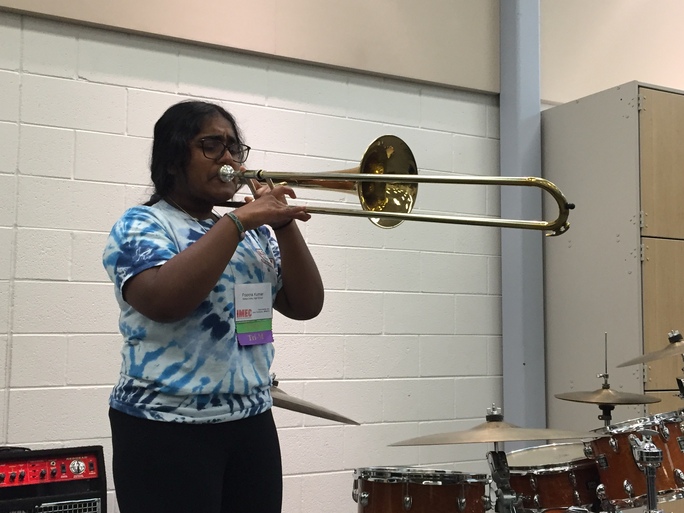 I played third trombone in the Honors Jazz Band.

What pieces did you play?

We played “Low-Down”, “Run For Your Life”, “Out the Window” which our director Adam Larson composed, and “Shanghai”.

What was your favorite part of the weekend?

I got to work with my directors for almost two full days. Adam Larson was really chill and taught every single person in the band something to take away regarding improvisation and being a solo musician. Even though we were playing as a band, it was really cool to get that experience.

Also, the best part was, because I am considering a career in music, having that experience of rehearsing for two full days, having to audition in the morning, having rehearsal a few hours later. It is also having to be stuck in a room with people you do not really know and then, 48 hours later, be really close with. I think that gave me somewhat an idea of what the professional world would be like.

Adam Larson is a really energetic guy. He was really fast-paced, regardless if it was our 10:15 p.m. run through or our 8 a.m. rehearsal in the morning. He was always making sure we were awake and ready to go. He made the rehearsal environment really comfortable, and he is really down to earth with all of us.

Did you run into other people you know?

Because there is the district level and students do a bunch of other things in their locality, sometimes our high schools get to meet in these big events. It was really cool to see our friends from other schools who we have seen through other clinics.

What advice to have for auditionees next year?

Take every audition as an opportunity for personal growth to push yourself to see where you are at. When you go into an audition, try not to think about your competition. Think about how you can have your best performance at that particular moment, and use that to better your musicianship as you go.