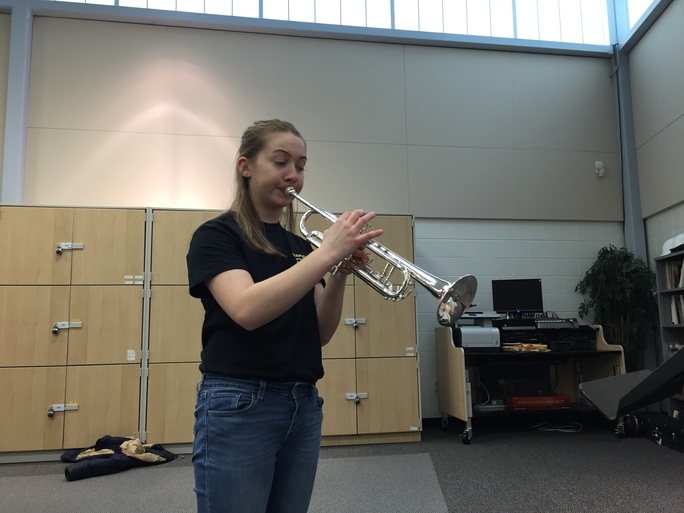 I was in Honors Orchestra on trumpet. I had to audition on Thursday, and I made third chair.

It was really weird because I had to go up an elevator for every audition room. They were in hotel rooms, but it was still blind so that part of it was normal. I had all the experts prepared, but they only chose two of them for me to perform. I thought I did really well because those were two that I actually enjoyed playing. It was the same as the district audition expert for orchestra. You have to play some orchestral excerpts from the pieces that All-State and Honors Orchetrsra were playing.

What pieces did you play?

We played Shostakovich’s Symphony No. 10, Movement 2. It was really fast for the violins and had a lot of blasting for the brass. We played “1812 Overture”, which a lot of people have probably heard in movies. It was very in brass as well, and the trumpets got to do some awesome fanfares.

It was very overwhelming for me because it was a lot of rehearsals, a lot of meeting new people, and also saying in the hotel while also having to be doing a bunch of music stuff and seeing concerts. But I also had a lot of adrenaline because it was very exciting doing all these new things.

My favorite part, I think would be listening to the concert, and also being in the rehearsal just listening because having that many really good musicians in one place making really good music, you just sat there and soaked in everything. Also meeting the people that were able to make such great music.

There was one kid in front of me that played the contrabassoon, which I had never seen, and the first time he played it, I just could not contain myself. I made this noise of awe, and everyone looked at me, but we were all looking at him because he sounded like a steamship.

What advice do you have for people auditioning next year?

Have as much confidence as possible. I think one of the reasons why I did really well at the All-State audition was because I was just proud of myself for being there already. I just had to trust what I knew, what I like about playing, and what I prepared. Also, talk to people around you to get your nerves down because that helps me a lot.