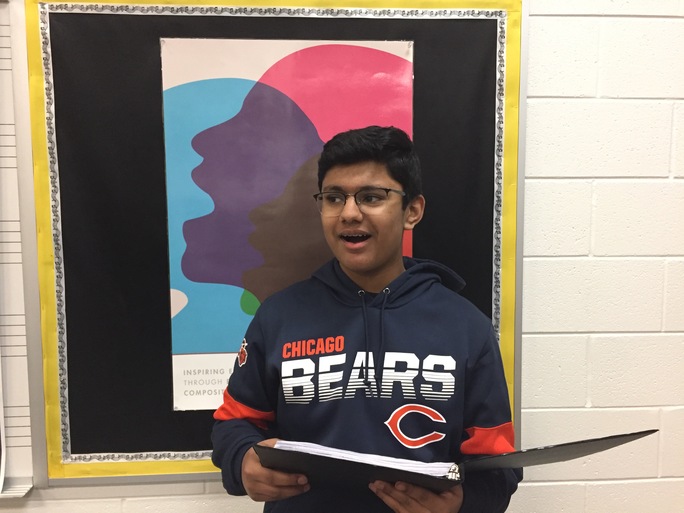 I was in the All-State Choir.

What songs did you sing?

It was awesome. We had so much fun. I was hanging out with Akhil and Dylan, but the rehearsals were also so much fun. The director was awesome. He was from the University of Texas at Dallas. The choir sounded really good and it was a really enjoyable week.

What was your favorite part of the weekend?

My favorite choir part of it was when we got to do a video call with the writer of one of the songs, and he worked on the song with us. Overall, I loved being away from school and being with friends and working with them and chilling with them.

Any fun stories from the trip?

We had a rehearsal from 6:30 to 10:30 p.m. on Thursday night. After that, Akhil, Dylan, Emma, and I went out to Steak and Shake, and we were there until 11:30 and that was super fun. We got back to the hotel right before our midnight curfew. That was one of the most fun experiences.

The auditions were way back in October. A bunch of people from Metea went because they were selected to go audition. For choir, there was only one audition for both district and All-State so there was not an audition for us in Peoria. You usually sing a couple of excerpts and vocal skills. Band and orchestra are different, though.

What advice do you have for someone auditioning next year?

My advice is to not sweat it too hard. Give it your best shot. Work hard on the songs.