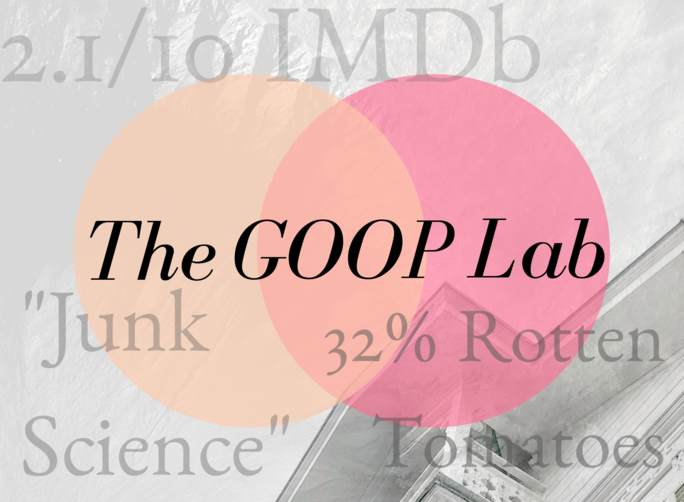 Goop is slammed with bad reviews the day of its release on Jan 24.

The Goop Lab is a documentary series that currently has one season. It came out at the end of January as a Netflix Original show. The series is hosted by Gwyneth Paltrow and the Goop team. Goop is described as “a modern lifestyle brand” founded by Gwyneth Paltrow. Staffers of Goop are known as “Goopers.” The Goop Lab’s description is as follows: “Leading with curiosity and keeping it real, Gwyneth Paltrow and her Goop team take a look at psychedelics, energy work and other challenging wellness topics.” This show investigates forms of alternative medicine; mental/physical therapies that are not widely known or supported by the mainstream medical community.

There has been an influx of controversy over this series because of the skepticism of alternative medicine. “Alternative medicine” is a term for medical therapies that are not accepted by the medical community. Examples include ayurveda, homeopathy, meditation, reiki, herbalism, acupuncture, chiropractic therapy, and many more. Just because these forms of therapy are not supported by traditional medicine does not mean they are not scientifically sound; that is exactly what this show attempts to explore. There are six episodes, each covering a different therapeutic method; majority catering to mental illnesses such as depression, anxiety, PTSD, and more.

I personally think there is nothing wrong with The Goop Lab. In fact, I adore it. It was very interesting, eye-opening, and entertaining to watch. Many argue that the show is supporting pseudoscience; although, I do not believe that is true. The word “pseudoscience” implies fakeness, but the show makes a great effort to actually prove that forms of alternative medicine are backed up by science. That is the whole purpose of the documentary. There is not a single episode that does not contain scientific evidence, reliable guest speakers, and profiles of people who have undergone said therapies. Nevertheless, people should always conduct complete, well-rounded research before engaging with anything intended for a medical purpose. That is always on the individual. Plus, the documentary provides a sufficient disclaimer. Therefore, you can not blame this series for putting people at risk. Everything has risks.

I think this documentary explored alternative medicine in an intelligent way and I really learned a lot from watching each episode. It is simply interesting to gain knowledge about all these forms of therapy that are not completely accepted by the public and to know people’s experiences with them. Just like any other documentary, this one’s purpose was to explore and inform. I think there is just a general bias against alternative medicine that’s making people frown upon this show. And for the people who truly want to investigate therapies like the ones covered in The Goop Lab, why deprive them? The people who enjoy experimenting with alternative therapies like me really appreciate this documentary. Just because something is not widely accepted does not mean it does not/cannot work. It does not bash mainstream medicine, it simply advocates that other forms of medicine can be beneficial/effective as well. The one sentence that Gwyneth Paltrow said that has stuck with me is “to me, it’s all laddering up to one thing, which is optimization of self. We’re here one time, one life, how can we really milk this?”. The documentary was made for the purpose of giving the readers of Goop the information they wanted about certain topics. The members of the Goop team wanted to investigate all of these things for themselves and then inform the public about their personal opinions and experiences. There’s simply no fault in that.

I would like to pull a lengthy quote from a New York Times article by Elisa Albert and Jennifer Block about The Goop Lab. It is called “Who’s Afraid of Gwyneth Paltrow and Goop?”; this is a great article in support of The Goop Lab that makes some strong arguments. “Throughout history, women in particular have been mocked, reviled, and murdered for maintaining knowledge and practices that frightened, confused and confounded “the authorities.” (Namely the church, and later, medicine.) Criticism of Goop is founded, at least in part, upon deeply ingrained reserves of fear, loathing, and ignorance about things we cannot see, touch, authenticate, prove, own or quantify. It is emblematic of a cultural insistence that we quash intuitive measures and “other” ways of knowing — the sort handed down via oral tradition, which, for most women throughout history, was the only way of knowing. In other words, it’s classic patriarchal devaluation…To be clear, we aren’t looking to Goop for scientific rigor (or political consciousness, for that matter). But it’s condescending to suggest that if we are interested in having agency over our bodies, if we are open to experiencing heightened states of awareness and emotion, if we are amazed by and eager to learn more about the possibilities of touch and intention and energy, and if we’d like to do everything within our power to stay out of doctors’ offices, we are somehow privileged morons who deserve an intellectual (read: patriarchal) beat-down. Openness to intuitive measures that might help us avoid or ameliorate chronic despair and disease does not make us flat-earthers. The word “science” has morphed into a virtue signal, but science is simply a tool, and it can be used for both good and ill. “Science” was used during the first half of the 20th century to stop women from breastfeeding, encouraging them to turn to highly profitable, shelf-stable formula and jars of baby food instead”.

All in all, I am for “alternative medicine” and I am for The Goop Lab. The documentary has inspired me to go on a quest of discovering/experiencing all types of therapies in the world that may make me feel “good”. Viewing all of these profound, spiritually transformative endeavors has convinced me of very much. Yeah yeah, call me naive or too impressionable or gullible. I just want to “milk” everything I can out of life too!

My personal favorite episode was “The Energy Experience”. It takes into account legitimate physics and I learned about something very unique. I enjoyed all the other episodes as well. “The Pleasure is Ours” opened my eyes and contains some truly important messages.

What I liked about this episode was that the Goopers took psychedelics in a controlled, guided environment for spiritual benefits. They went on a healing trip to Jamaica to try shrooms. It was not simply recreational, not that I am against recreational usage of psychedelics, but It was genuinely therapeutic and watchers could definitely deduce that. It also brought me to tears to see their profound reactions. I would rank this episode my second favorite, tied with “Cold Comfort”, after “The Energy Experience”.

This episode investigated the famous “iceman” Wim Hof method that went viral. The goopers did “snowga” and jumped into a frigid lake. It has inspired me to take freezing cold showers to strengthen my immune system and possibly help me with anxiety. The Goopers’ takeaways from their ice-cold activity in Lake Tahoe were pretty convincing. It further established how important the tool of stable, deep breathing is.

The Pleasure is Ours

This episode is completely based on scientific fact. The Goopers interviewed sex educator Betty Dodson to share her wisdom. No one can argue that this is pseudoscience. It is empowering, informative, and speaks messages that are important for females to hear regarding sexual health. It was very eye-opening for me, as I am naive. But I believe this episode can be eye-opening for anyone honestly. It’s a huge step toward eliminating the notion that sexuality, specifically female sexuality, is a taboo subject to have conversations about.

This episode was many things in one. “Internal” age tests, fasting, and facials; including the trendy “vampire facial”. The Goopers consulted two professors: one from University of Southern California and one from Yale University. In my opinion, it was the most boring episode, but ironically it was probably the most scientific and “normal” one of them all. One can still learn many fascinating facts about general health and aging from “The Health-Span Plan”.

Definitely the most special episode that covers a type of therapy that many maybe are not familiar with. I did not know what energy therapy was before watching this. Once I watched this, I immediately decided I have to try it sometime in my life. The idea behind energy therapy is that the energy field of a human is being manipulated to enhance cell regrowth and to benefit the mind, body, and soul. It is supposedly all “integrated”. The viral video of Julianne Hough making a loud “orgasmic” sound was of her undergoing energy therapy by the man this episode revolved around, John Amaral. The effects this therapy had on the people interviewed were intense and different for each person. It was intriguing how Amaral catered every session to the patient’s unique circumstances and qualities, helping them with their individual needs.

Actually seeing a psychic at work just further established by belief in the immortality of the soul. I was a mild skeptic of psychic mediums, but this episode actually did convince me that there is something more. But whether you believe in anything spiritual or not, this episode is simply cool to watch. I loved seeing all the Goopers’ emotional reactions to their psychic experiences. The idea of the episode was that everyone has psychic abilities that they can utilize. The episode focused on the practice of Laura Lynne Jackson and how mediumship can help with grief. It had a nice impact on me, leaving me excited to explore the infinite mysteries of the world.