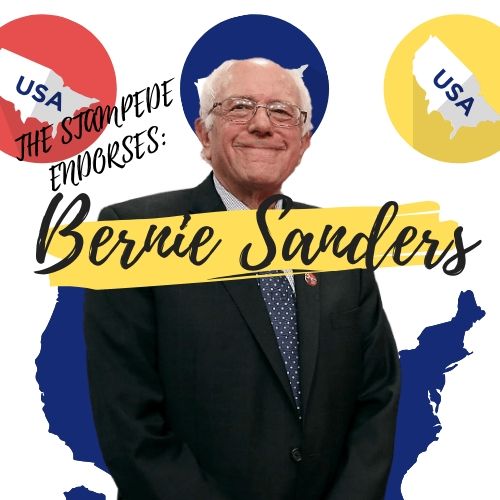 If the party plans to be a true alternative to Trump’s Republican Party, then it must nominate a true member of the left.

The Stampede Editorial Board has decided to endorse Senator Bernie Sanders of Vermont for the Illinois Democratic Primary. The board believes that Sanders is uniquely equipped to establish real change in a stagnant nation. When choosing the candidate best fit for students, the board highlighted three critical issues facing students.

The editorial board has decided not to endorse a candidate in the Republican Primary due to the lack of legitimate challengers against incumbent President Trump.

Sanders’ Medicare-for-All plan has drawn criticism from many of the moderate members of the party for being too partisan and the apparent claim that it takes away insurance from over 100 million people.

The idea that Sanders’ plan takes away healthcare from people is half-baked and manufactured to mislead people. Medicare-for-All would take away your private insurance, yes, but replace it with a  single-payer insurance system, effectively expanding your actual choice of which doctor and hospital to use outside of the network your old insurance provided.

Proponents of a public option cite the large pricetag to single-payer healthcare but lack an actually feasible alternative. The public option that Mayor Buttigieg and Senator Klobuchar advocate would cost more in the long-run, cover fewer people, be highly ineffective due to the power of the insurance industry, and turn into another big government program that runs down due to overcomplications and a lack of funding.

For students, Medicare-for-All would mean that every student would be able to seek out mental health help regardless of cost. Sen. Sanders’ plan to reduce prescription drug costs also means that no one would be paying egregious prices on prescription drugs.

Medicare-for-All would give Americans security to look for other job opportunities without worrying about losing healthcare coverage, and most importantly it will give more people buying power to both stimulate the economy and control their employers. It’s Sanders’ lifelong embrace of a single-payer system that has earned him the position of being the healthcare candidate.

Sanders has released three different plans to fundamentally change the current education system in the United States. Sanders’ college-for-all and childcare-for-all plans are the most progressive plans of the pack and go beyond just expanding opportunities for Americans.

With the cost of preschool funded by the government, working-class Americans can begin to work without worrying about their kids and avoid paying the high rates of the current childcare industry. Sanders’ plan to cancel student debt and impose a tax on wall street transactions to fund college-for-all stands as a surefire way to both reign in Wall Street, and at the same time establish free education for the people.

Illinois has one of the highest rates of income and racial inequality in the country, and as such the Democratic candidate must take it seriously. Senator Sanders best addresses the massive issue of income inequality in a way that would allow for fair taxation and the reduction of the wealth gap.

Sanders’ 2016 campaign was criticized for class reductionism but the campaign has finally embraced racial struggle in many of their plans, somewhat mending the lack of concern of his previous campaign. Despite some weakness with class reductionism, Sanders’ view far outpaces his supporters’ ending up with the mass movement we see today.

Sanders supports plans to reinvest in minority neighborhoods and of course, his social welfare plans stand to allow middle-class families to spend their money more liberally and pursue their career goals.

Senator Sanders’ views have stayed consistent throughout his career, in truth, that signifies just how long the structural issues of modern America have existed for. The next Democratic nominee should continue to work for its constituency, rather than to appeal to the constituency of the opposite party. If the party plans to be a true alternative to Trump’s Republican Party, then it must nominate a true member of the left.

The 2020 election may be one of the most important elections to happen in our nation’s history and it is imperative that the Democrats choose the right nominee going into this struggle. There’s only one candidate with an actual movement that can push through an electoral victory in critical rust belt states in the midwest. While moderatism at a time of uncertainty may seem like a prudent choice, Democrats don’t have the time to wait for a moderate to fix things, the changes must happen now.