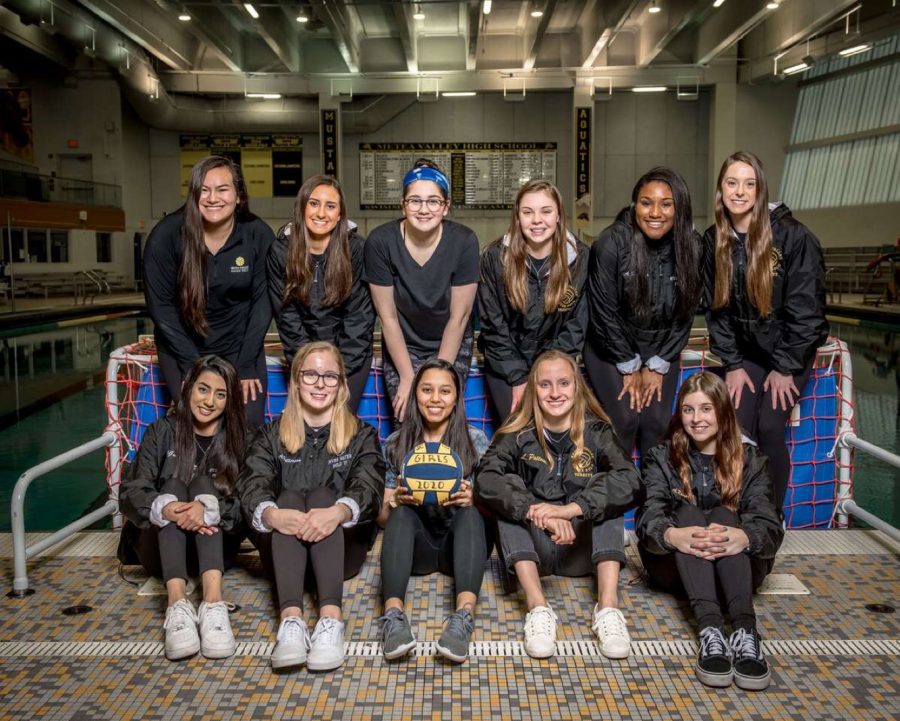 Due to the outbreak of the novel coronavirus, the IHSA has canceled all spring sports for the 2019-2020 school, which includes girls’ water polo. This is an upsetting drawback for the entire team, being a season they will not be able to get back. However, for the seniors, they had to abruptly conclude their time competing for Metea. In efforts to represent the player who lost their final season, here are the seniors of the girls’ water polo team looking back on their greatest memories.

Khyati was the manager of the girls’ water polo team. Her favorite memory was when she had assistance doing her job.

“My favorite memory was when Sarah Klewicki managed with me because we had so much fun at games and practices,” Dani said.

This fall, Dani will be attending Saint Louis University. She will be studying health management on the pre-med track. Her final words of encouragement to anyone who is considering managing a sport speak for themselves.

“Stick with it,” Dani said. “It gets way easier over time and just have fun with it!”

Gurmani’s favorite memory of Metea water polo was anytime she got to be with her teammates.

“My best memory was simply spending time with the team,” Gurmani said. “Whether that was practices or bus rides to tournaments or games.”

This fall, Gurmani is set to attend Benedictine University. She will be majoring in biology and going on the pre-med track. As she leaves high school to start this new part of her life, she leaves this guidance to incoming polo players:

“Don’t let mental blocks stop you,” Gurmani said. “You are so much more capable than you think and you should always keep a positive mindset because hard work really does pay off in the end.”

Huang recalls her favorite memory all the way back to her very first varsity game.

“I don’t even remember if we won or lost,” Huang said. “But I do remember feeling like this moment was what I had been working for all those years.”

Huang will be attending the University of California San Diego this fall. She will be majoring in chemistry and plans to play club water polo. As she leaves Metea, she leaves these final words of guidance for any incoming water polo players:

“Never stop,” Huang said. “No matter how discouraged, how stressed, or how tired you are, just keep going.”

Marty’s favorite memory from water polo is celebrating with the team.

“My favorite memory was blasting music on the bus home after winning games,” Marty said.

Marty will be attending the University of Kentucky this fall. She is entering undecided. As she leaves Metea water polo, she has a good reminder for new, upcoming players.

“Always be open-minded on learning new skills,” Marty said. “And make sure you show up to practice early!”

Morin’s favorite memory was playing an away game against Sandburg in her sophomore year.

“We kept going into multiple overtime’s that we eventually went into sudden death and won,” Morin said. “The whole bus ride back we were cheering and having a good time.”

This fall, Morin will be attending Western Michigan University to major in digital media journalism. She is also applying for the pre-freshman summer study abroad program in Montreal to kick start her college career. As she starts this new chapter, she leaves some final advice to incoming water polo players at Metea.

“Continue to work hard because you will feel all the improvements fast and it will be worth it,” Morin said. “Also, when Coach Musch yells it’s because he thinks you can’t hear him, he isn’t actually mad at you.”

Noe’s favorite memory from water polo is centered around one specific Saturday practice that many of her teammates had to miss due to ACT testing.

“We had a very chill, shortened practice, and then we all went to Dunkin’ Donuts after,” Noe said. “Although it wasn’t an ideal situation we still bonded as a team and had so much fun.”

Noe will be attending the College of Wooster this fall. She is going in with a biology major and on the pre-med track. She will also be competing on their swim team.

“Have fun and make sure you don’t have zero-hour if you have an extended class.” Noe said.

Patterson remembers her favorite memories at any time being with her teammates.

“This team always had the best atmosphere,” Patterson said. “I think we really had a lasting bond.”

Patterson will be attending Lewis University this fall to major in accounting. She will also be continuing her swimming career. Her last advice for future water polo players is this:

“Don’t be afraid to be yourself,” Patterson said. “Have confidence in who you are! You always have something to contribute to the team.”

Patterson’s favorite memory from Metea water polo was during the Sectionals of her junior year.

“We beat St. Charles East 6-0 even though they were a higher rank than us,” Patterson said. “It was a really fun game because everyone was playing really well and we wanted to show them and other teams that we are a great team.”

Patterson will be attending the University of West Florida this fall. She will be majoring in accounting and also be competing on the swim team. Patterson is happy to remind incoming water polo players about what she believes is truly important.

“Don’t be afraid to try something that you aren’t comfortable with,” Patterson said. “I never thought that I would be a goalie all of my four years on the water polo team, and I am so thankful that I stepped out of my comfort zone and tried something I never had done before.”

Ramierz remembers her favorite memories during her junior year and being with her teammates.

“My best memories were just getting to be on the sectionals team my junior year and spending time with all my friends,” Ramierz said.
Beginning this fall, Ramirez will be attending the University of Alabama. She is entering undecided. Before she leaves Metea, however, she gives this lasting advice to incoming water polo players.

“Don’t be afraid to join just because you think you aren’t a contact sports person,” Ramierz said. “I was super shy my freshman year.I never played water polo before, but I picked it up very quickly and I made a ton of new friends which allowed me to come out of my shell.”

Siwicki reflects on her water polo seasons and remembers playing in the tournaments and sectional games as her favorite memories.

“They always made the team come together and were a lot of fun but intense at the same time,” Siwicki said.

Siwicki will be attending the University of Iowa this fall to major in biomedicine on a pre-med track while minoring in Spanish. She hopes to attend medical school after. She leaves this advice to any incoming water polo players.

“Try new things,” Siwicki said. “When the coach wants you to take a new approach to play or you want to try something new in a game, don’t be afraid to do it. And don’t back down from a  challenging game!”

Williams’ favorite memory of the water polo team was the bus rides to the long tournaments on the weekends.

“We would all bring food, listen to music, and laugh the entire time,” Williams said.

She plans on attending Xavier University this fall to major in business analytics and minor in marketing. Williams also plans to continue to play water polo on the club team.

“Yes, [water polo is] a hard sport but everyone is learning something new no matter the skill level,” Williams said. “You will learn so much about yourself with this team inside and outside of the water. Don’t give up, in Dory’s little voice, ‘Just keep swimming, just keep swimming.’”