District 204 opens up the conversation regarding acts of injustice 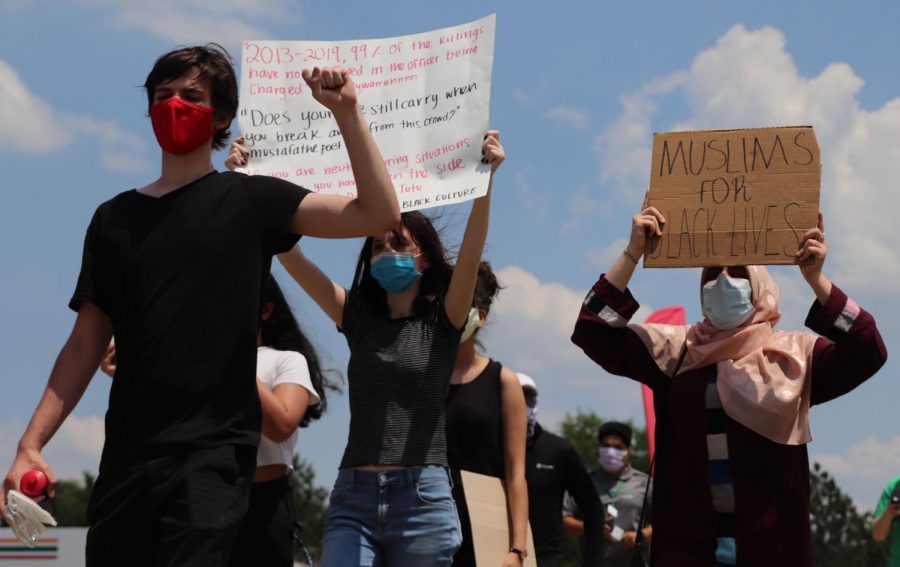 The Naperville Neighbors United will be hosting a youth forum tomorrow at 7 p.m. Those who are interested in registering can click the link at the end of the story.

The murder of George Floyd on May 25 sparked global protests against racism and police violence, including protests in Naperville and Aurora. Weeks of ongoing protests stimulated conversations about racism that have been shoved under the rug for too long.

“As an African American student myself, it’s kind of disheartening that we’re still having this conversation,” senior Ijeoma Ogbonna said. “We’re still seeing these trends in 2020 and even people of color, in general, are still being mistreated and discriminated against.”

The Parent Diversity Advisory Council held a Zoom meeting on June 11 to listen to students’ concerns about racial inequality in District 204 and to shine a light on racism outside of the classroom. PDAC is a parent organization that meets throughout the year to support inclusion and diversity across the school district.

“The great part about PDAC is that it is a visible organization,” Executive Director of Educational Equity and PDAC co-chair Jennifer Rowe said. “PDAC is able to really facilitate and host that event. It was great that the kids know that as an organization that they could connect with to facilitate this dialogue.”

Student and district members discussed sensitive topics. Throughout the meeting, students shared stories about seeing or experiencing racism. Most of the students’ incidents were microaggressions from teachers giving different students more empathy and trust than others.  One Metea graduate, who shared her story anonymously, talked about a teacher telling her she wouldn’t do well in that class, rather than offering extra help. As a student who is Black and Hispanic, she felt like the teacher had lower expectations for her because of her race.

“It’s inspiring to hear people talk about their experiences with racism, because it’s not just sad to see, but it takes a certain amount of courage for them to stand up and talk about it,” Metea graduate Karthik Pasupula said.

The meeting also covered topics including the achievement gap and the push for awareness in the curriculum. Students elaborated on the inequality towards resources for underprivileged students in the school community. In addition, others discussed the lack of implementation and opportunities to learn about social justice and racism in the school curriculum.

“I felt more connected especially to those who spoke and had their own experiences to share as well,” senior Justin Campbell said. “I think it’s important for us to have a situation where we talk about the world and I push for it more in the classroom because it could really open those doors of unity for not only Metea but schools everywhere.”

Following the students’ testimonies, teachers and administrators responded to them by acknowledging their courage to share the issues behind closed doors. Raczak continued to add comments revolving around a partnership between the student body and the staff.

“Get uncomfortable and talk to some African American students on learning the history, especially behind racial slurs,” Ogbonna said.“That’s something that a lot of us can throw around as a joke, so we all need to do better and educate ourselves on different issues on backgrounds that are different than ours.”

Part of the district’s work to re-evaluate their approach to learning and curriculum is through a voluntary program called Black Lives Matter Summit this summer. The summit is self paced and three weeks long. The program includes content about the history of African Americans and modern day issues.

Teachers and staff access resources from the program including documentaries and articles in relation to group discussions. The program also includes panel discussions such as last Tuesday’s panel, Young Gifted, and Black. D204 graduates including Marcus Towns (Metea Valley ‘15) and Sannah Boyd (Metea Valley ‘17) were invited to talk about the allyship, equity in education, and implicit bias in the community.

“You have to be learning the past, not just about slavery and segregation,” Ogbonna said.“It’s knowing the deep systemic problems that exist today. It’s learning about the Tulsa and Rosewood Massacres back in the day. We live in a suburban bubble like Aurora and Naperville, but 40 minutes away there are black and brown communities that are struggling where they don’t have the same resources as us.”

Although the district is taking measures to address inequality in the community, many students believe that one step will not cure years of injustice.

“The fight is not over,” Metea graduate Aarthi Krishnakumar said. “The lack of education is the reason varying degrees of racism exists.”

As the summer continues, empowered students are searching for ways to learn more about inequity and to voice their opinions. Teachers and administrators are encouraging students to continue in stepping outside of their comfort zone to move the conversation forward.

“We’re trying to figure that out from meeting with young people. A lot of us are in the same place,” Rowe said. “A lot of it is, ‘How do we change our behavior?’ because we have to learn to know that some things are microaggressions and we have to practice not doing those things. As educators, we know we have to do some work on meaning what we teach, and how we teach.”

In addition to opening the dialogue, students are encouraged to continue advocating and communicating with community leaders through civic engagement.

“What I would say to young people is to get actively involved,” Rowe said. “All these things are going on whether it’s online forums or going places to support, find something you believe in, and work towards that,” Rowe said. “Civic engagement is real, and it’s important.”

The Naperville Neighbors United will be hosting an online youth forum called ‘Racism: A Conversation with Our Youth’ tomorrow at 7 p.m. They are partnering with Naperville 203 and Indian Prairie 204 to allow grades 6-12 and college students to voice their concerns and experiences regarding racial inequity. Students will also be able to share suggestions for local change to school district leaders and local elected officials. Those who are interested can click here to register.