Ruth Bader Ginsburg’s legacy and what is next for the U.S. Supreme Court 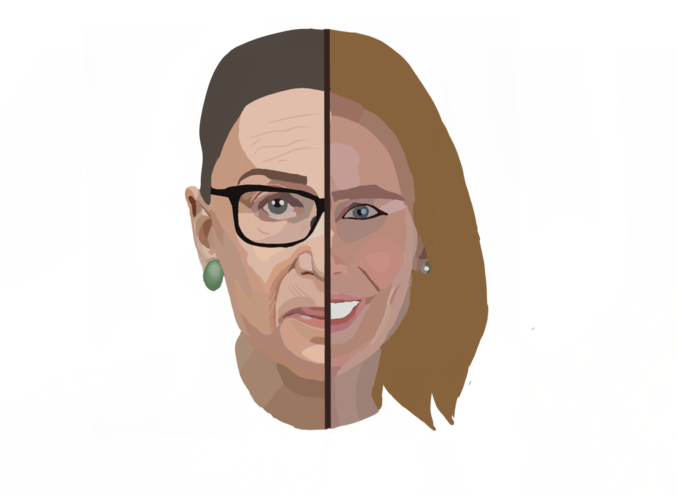 Ginsburg was the second woman to serve the US Supreme Court, the first Jewish woman to become an associate of justice, she is known as a phenonomenal role model, she passed away on Sept. 18.

In her early years, Ginsburg graduated at the top of her class in Columbia, and even became the first woman on both the Harvard and Columbia law review. One of the significant things she was known for was being a feminist. Ginsburg fought for equal rights for women and, in addition, won five of six cases about sex-based discrimination that occurred while she was on the bench. She is also the founder of the American Civil Liberties Union (ACLU)’s Women’s Rights Project, which has played a significant role in protection against sex discrimination. Ginsburg was a true role model to follow, and through her powerful actions, the country has changed for the better.

Sadly, the greatly accomplished associate Justice Ruth Bader Ginsburg passed away on Sep. 18. Ginsburg became the first woman and the first Jewish citizen to lie in state in the National Statuary Hall in the U.S. Capitol. The U.S. Supreme Court paid tribute to Ginsburg by draping a black wool crepe on her chair. Ginsburg’s family said that they will hold a private funeral and lay Ginsburg to rest alongside her husband Marty Ginsburg.

Ginsburg’s death comes as a shock to all- and now, the country is in a race to get a new person to replace her position.

Federal appellate Judge Amy Coney Barrett of the Seventh Circuit U.S. Court of Appeals is the President Trump’s nominee to be the successor of Justice Ruth Bader Ginsburg. Barrett is a strong conservative who has shown her support to the Republican Party through her actions regarding topics such as abortion and gun rights.

The Kanter v. Barr case regarding the Second Amendment is one of Barrett’s most notable works. Her opinions on the case can tell the American people a lot about her beliefs and how she interprets the Constitution.

The Kanter v. Barr case involved a man named Rickey Kanter, who was found guilty after selling both approved and unapproved versions of therapeutic footwear to podiatrists. As a felon, Kanter’s status restricts him from having certain rights and privileges, one of which is the right to have a gun. Kanter is not legally allowed to own a firearm under both federal and Wisconsin laws. Thus, Kanter decided to sue the government, arguing that the government violated the Second Amendment.

In Barrett’s 38-page dissent on the case, she argued that “Neither Wisconsin nor the United States has introduced data sufficient to show that disarming all nonviolent felons substantially advances its interest in keeping the public safe.” In simpler terms, she has stated that even though Kanter committed a felony, what he did was not violent and should not prevent him from legally owning a firearm.

Barrett believes that the only reason to prohibit gun rights is if the individual is proven to be dangerous. Her opinion strongly corresponds with the Republican Party, as this party generally supports the right to bear firearms. It makes perfect sense that she is the nominee President Trump has chosen to take over Ginsburg’s position, given her strong conservative beliefs.

Furthermore, President Trump is pushing for Barrett to become the new Supreme Court associate justice before the upcoming election. There is discussion about how the voting for the election will look, and so far, postal voting has shown itself to be the safest option in terms of voting during the pandemic. Most people will likely choose to vote through postal services, and this will take place even before the actual election date. This is where arguments arise about postal voting’s legality, as there is a chance that the votes can be tampered. President Trump has even said to reporters during a meeting with the Arkansas and Kansas governors that “Mail-in ballots are very dangerous- there’s tremendous fraud involved.” The President himself believes that the election may not end fairly, and to deal with that situation the Supreme Court will have to discuss the legality of postal votings. If Barett becomes the new associate justice, her opinion and vote on the case can have a major impact on America for years to come. The reason is the imbalance Barrett will cause by simply being on the court.

If Barett replaces Ginsburg, the Court will become the most conservative it has been since the 1930s, and if the Supreme Court faces a major imbalance of power then the future of America will only be decided by one party. That is why justices don’t get replaced soon after their deaths, especially during an election year. An example can be the passing of  Justice Antonin Scalia in 2016. In this situation the Republicans decided to replace the justice after the election, thereby giving a chance to the American people to contribute to the selection of the nominees. Normally, justices are never put on the bench during the election year, because a major shift in balance can take place. Currently we are seeing the court turning into a conservative bench majority (6 conservatives to 3 liberals), and adding Barrett during the time of the elections will only cause more controversy.

Barrett faces intense opposition from the Democratic Party, especially from Joe Biden. Biden has criticized that Barrett is not the best person to fulfill the role of an associate justice. He says that Barrett is too conservative, and may end the Affordable Care Act, also known as Obamacare, with her vote.

After all, President Trump is trying to “throw out the Affordable Care Act- Obamacare,” Biden said in a speech at Wilmington, Delaware. As Barrett is from the Republican Party, as well as a pupil of the late conservative Justice Antonin Scalia, she is likely to support much of the Republican’s decisions. Thus, Biden thinks that she will vote against keeping Obamacare, and many other democratic plans.

Barrett will shoulder responsibilities that will affect not only her life, but also everyone else in the country. The decisions she makes based on her beliefs may impact the country for generations to come.