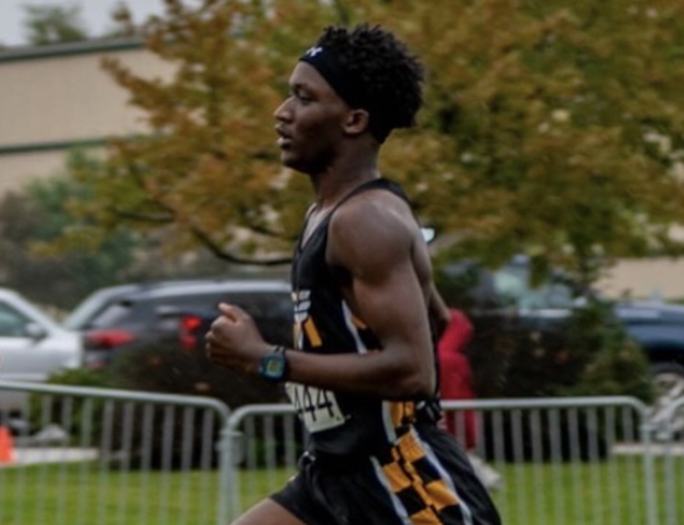 Senior Mamadu Diallo goes in depth on his goals and work ethic during his time on the team.

Senior Mamadu Diallo is finishing up his last season running for the varsity boys’ cross country team. Mamadu joined cross country to build a stronger aerobic base and knew that hard work, especially during his junior and senior year, would push him to become a strong  runner.” After running sophomore year, my coach saw I had potential, and said [that] if I wanted to reach my goals, I needed to run cross country,” Diallo said.

Despite having also played on Metea’s soccer team, his sophomore year in addition to cross country. Diallo found that his path lied in the world of competitive running. His love of the sport stems from

“The thing I love the most about the sport is what you put in, you get out,” Diallo said. “When everyone is on the line, personal records and natural talents do not matter. All that matters is who wants it the most.”

When it comes to cross country and many other sports, it’s not just about how fast you run, it is about the amount of time and practice you are willing to put in.

“You pound day in and day out,” Diallo says. “I can’t think of a single workout where I did not collapse on the floor.”

Despite the constant training this year, Diallo is unsure about his performance this season.

“I honestly haven’t done that well, and I haven’t even run close to my goals,” Diallo said.

With that in mind, one of his goals is to break the time of 15:30 for the three-mile race before he graduates. Diallo is hoping to fulfill that goal at regionals this weekend.

During the meet at Neuqua Valley on Sept. 18, Diallo broke 16 minutes in three miles for the first time, meeting an important milestone that he set for himself this season. His performances are not the only form of success the team had during this meet. Their best performance this season took place at Neuqua Valley against Naperville North and Neuqua Valley, where almost every single runner on the team broke a personal record.

A large role that plays in team success is team chemistry. Despite the pandemic, the team has been able to do just that by playing video games after practices and running with one another. COVID-19 precautions are being taken when it comes to practicing and training, with added social distancing and condensed meets. However, the environment of cross country has stayed relatively the same from previous years.

Besides smaller meets and social distancing, not much has changed with cross country procedures, and the players have kept the same energetic, positive environment.

“Honestly, we are truly blessed to even have a season, because many [sports] don’t,” Diallo said.

When considering Diallo’s future, he is uncertain where life will take him regarding his competitive running career.

“To be honest, I am not sure if I want to run competitively in college,” Diallo said. “Prior to this year, that was the main goal.”

Taking on a sport in college can become a way of life, and is a time-consuming responsibility to uphold, but Diallo is going to wait and see what the future holds for him in the meantime. Currently, Mamadu Diallo is getting ready for the IHSA Regionals this Saturday, where he will represent one of seven seniors on the team.

“I know it will be tough, but I’m just going to go out and race like it is my last,” Diallo said.