How to cast your ballot: A government teacher’s encouraging advice to new voters 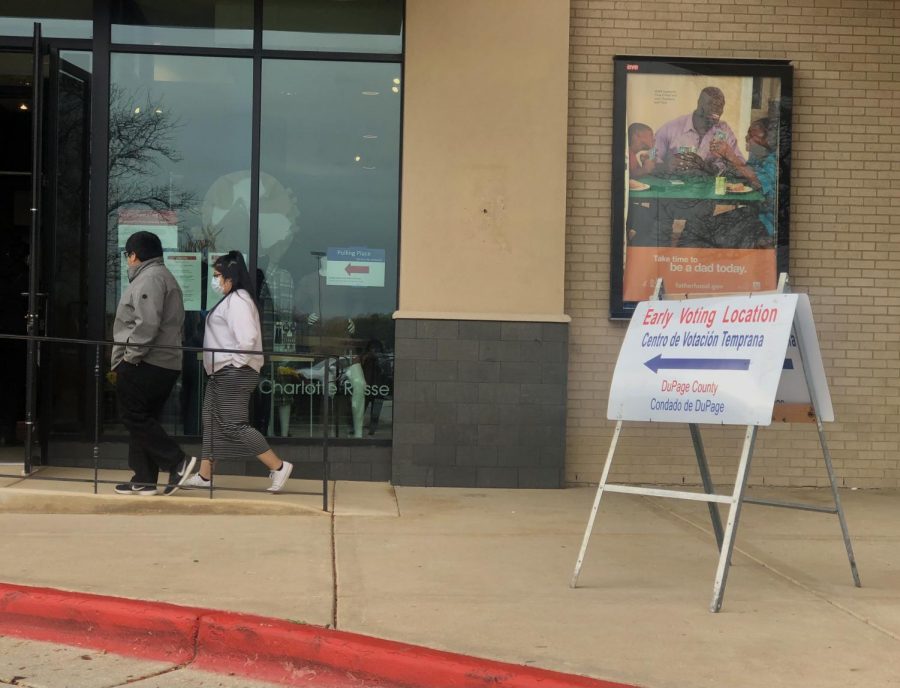 Early voting began on Oct. 19 and will end in Nov.2. Registered voters can go to early voting locations such as Fox Valley Mall or Naperville City Hall to cast their ballot.

2020 has been a chaotic year for politics. Due to social media, more teenagers are forming their opinions on the two presidential candidates, Joe Biden and Donald Trump. This year, there has been a surge in registration for young voters. With many eligible student voters eager to play a role in the upcoming election, there is still a lot of confusion surrounding the voting process. How should students approach the ballot? We sat down with AP Government teacher Mary Anne Zears for her advice on getting out the vote.

“We encourage [voters] to do early voting,” Zears said. “You can early vote at the County Fairgrounds or by Fox Valley Mall. There are many options this year for young voters this year.”

While voters are able to cast their ballot in a variety of ways, it is important that they make sure the information they fill out is accurate and able to be processed through a variety of polling stations.

“Track your ballot,” Zears said. “DuPage County has ballot tracks, which allows you to put your information in and track your ballot to make sure your vote can be counted. This is important because registration requirements vary state-to-state.”

Voting may seem like a nerve-wracking process at first, but there are resources online to help young voters prepare to cast their ballots.

“One thing you can do is visit Ballotopedia.com,” Zears said. “This website allows [voters] to fill out [their] ballot ahead of time and bring a copy into your voting booth, so you have something with you.”

Once voters have entered the booth, they may be bombarded with a list of local and state candidates to choose from.

“A lot of new voters do not really know what to expect with down-ticket voting,” Zears said. “Remember, [voters] do not have to fill up everything on the ballot, just vote for what you are comfortable with. If you just want to vote for the president, that is fine.”

New voters should be aware of the procedures to follow when voting, to make sure their ballot can actually be counted.

“[Voters] do not have to provide any type of identification to vote in the state of Illinois,” Zears said. “They may ask to verify your address just to see if you are at the right polling place, but they should never require identification.”

Students should also make sure they are complying with poll place guidelines.

“Once you get into the ballot box, make sure your signature matches with the one written on your driver’s license,” Zears said. “You cannot take pictures inside the polling place, and you cannot wear anything that reveals your political party affiliation, like ‘Trump 2020’.”

Given that students are prepared and know what to expect, voting is an easy process. This year, Zears believes there will be more young voters than ever flooding the poll booths.

“There seems to be a really big push to vote this year, and I think a lot of that has to do with the connection via social media,” Zears said. “We are in a state where we have such party polarization, where it is so left and right, which is why young voters feel this election is more critical.”

“I want everyone to have a platform to say what they think, but I think the toughest part of it is making sure it is an informed opinion,” Zears said. Like Zears mentioned, the political climate this year is extremely divided, and social media tends to feed this division.

“You tend to generally hear what you want to hear and see what you want to see,” Zears said. “Facebook has come out to say they have filtered posts based on party affiliations, and last election people could customize their feeds to receive only red or blue news.”

She reminds us of the importance of getting both sides of the political story.

“Remember, with polarization, we are hearing more about extreme opinions and moving away from the middle of the spectrum,” Zears said. “You can have your opinion. Everyone is entitled to your opinion, but you have to make sure you are respectful about it, you are informed, and that you are doing best for yourself.”

Young voters are free to use social media platforms to express their political voice, but they should make sure that voice is coming from a place of respect and careful research. While voting can be a scary process for young voters, it is important to understand the process of ballot-casting and the impact their ballot can have on our upcoming election. During such a polarizing election year, the best thing young voters can do is have their opinions heard.

“Get out the vote,” Zears said.