Meera Baid comes out on top despite adversity this year 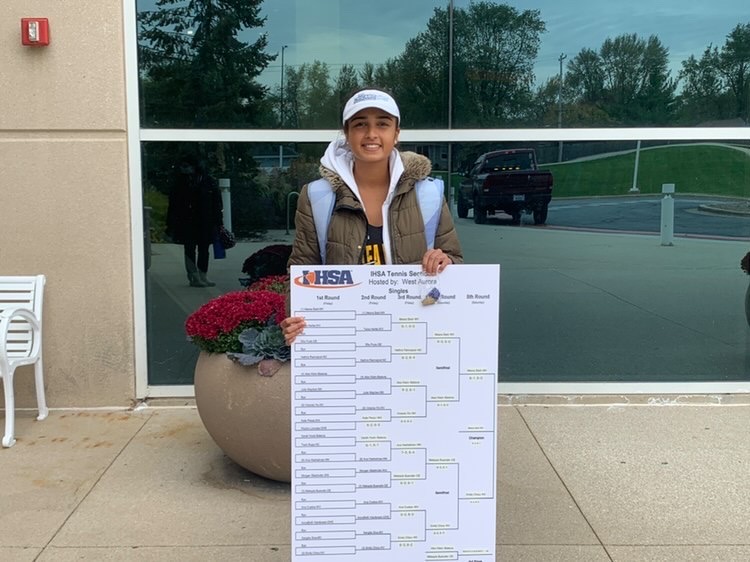 Meera Baid came in first place in Sectionals on Oct. 16.

Senior Meera Baid has a deep passion for tennis. She is on Metea’s varsity team and she won first place at IHSA Sectionals just over a week ago. The love she has for tennis started when she was five years old. Her dad got her into the sport and has been her coach for most of her life.

“My dad played nationals in India and introduced me to it when I was about five years old,” Baid said. “I tried out other sports as well, but tennis was the one I wanted to continue. My dad has been my tennis coach for the past 13 years, so he always trains and motivates me to work harder.”

Meera’s dad was not the only supporter she had. Her mom did her best to try and get her to be great and would always come and watch the games.

“[My mom] would come to support me for all my matches and would prepare me to perform my best off the court,” Baid said.

This year as a whole has been very stressful, and tennis has not made it any easier on Meera. Even with a great supporting cast like she has now, the new rules and regulations that were put on all fall sports have changed the way she plays. That put a strain on everyone to always do what they needed to stay healthy.

“The most stressful part of this year was probably making sure that all of us stay strict with the covid rules so we wouldn’t have to cancel our season,” Baid said. “It was really important to keep everyone in check.”

“There was always an uncertainty regarding how long our season would last which really helped us appreciate what we got so that was good,” Baid said. “There were definitely more restrictions, but we still got the best season we could have gotten.”

Meera and the rest of the team were still able to have fun despite the amount of stress put on them. Head coach Kole Clousing did his best with what little he could do. He made himself involved with the team in many ways and that boosted the morale of the players.

“Our coach, Kole, has made my season really fun and memorable,” Baid said. “Whenever we would have stressful matches, he would create a light atmosphere and make us laugh. He accommodated our schedules well and adjusted to everyone’s needs to make this season run as smoothly as possible.

Even with an exciting coach and helpful parents, there were still highs and lows that affected the varsity star’s season. Special events that boost a player’s confidence such as Senior Night will almost always be an important part of a seniors season. This was no different with Meera because it shows how lucky she was to be able to enjoy her final season.

There were lows in the season. Governor Pritzker’s new rules did not allow the group to be as a whole like in years past and the lack of some games gave the girls less time to be together. Baid was still able to put those past and her season was definitely one to remember.

Some of the highs were being able to have a senior night and being able to play all of our scheduled matches,” Baid said. “Some of the lows were that even though we bonded well as a team, it was not as much as it could’ve been with fewer bus rides and gatherings because of COVID-19. State also got canceled, but I am grateful for the season we were able to get.”