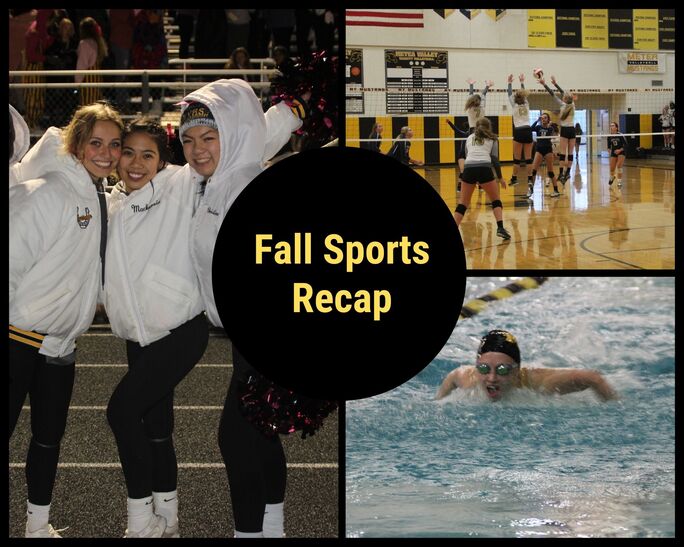 The fall sports exceeded expectations and proved that student athletes can play in a functioning season this year.

The boys’ cross country team had its ups and downs this year, with a few of the meets getting canceled. The Mustangs got their momentum back, with runners such as seniors Mamadu Diallo, Vishnu Krishnan, and junior Ben Lamsma led the varsity team, with all their best times coming at the Neuqua Valley Triangular.

“My coaches, they do everything right,” Mamadu Diallo said. “They give us the right workouts, they will give me tips on how to run my race and my teammates who definitely push me.”

These workouts also proved to benefit the team, both physically and mentally, as the times from meet to meet show. The team chemistry was on full display this season, as this group of guys was loud and proud when it came to cheering on fellow teammates at meets.

At the conference meet, the Mustangs fought hard against fellow DVC schools. Their team spirit was off the chain as throughout the entire course, one could hear all the Metea kids cheering on their teammates. They gave it their all. It was a fantastic all-around effort and a good note to finish their regular season.

Although COVID-19 derailed the hope of a postseason for the Mustangs, they are anxious for the track season to begin this spring.

This season for the girls’ cross country team was hit with twists and turns.. New protective measures that were added before the season kicked off affected the players.

“I am honestly surprised that we made it through the whole season without having to quarantine,” Behr said. “We were very careful with masks and everything, but it was still a lot of exposure even though our team only had 40 people.”

The masks and the social distancing were among the key changes that were introduced this year. Along with the lack of games compared to previous seasons, there was a whirlwind of new aspects to racing that the Mustangs had to adapt to.

“The biggest change from last year is probably the way everything ran between races and practice,” Behr said. “We always had to be mindful of how far apart we were and we could not run in any big meets this year.”

With social distancing in play, there was very limited interaction with the athletes. The interactions with the players were the biggest change that the girls faced due to most of them being used to competing with a high volume of other racers.

“Our team spirit felt really different because we were constantly split into smaller groups in order to stay far enough apart,” Behr said. “It feels like I did not really get to interact with the whole team at practice this year.”

“Races were a lot smaller this year than others,” junior Keeley Behr said. “A race with three teams is a lot different than 30. There was way less competition so it was hard to stay motivated during a race.”

There was still motivation by the team despite the adversity over the season. The coaching staff has kept the players at an important mental state by using their contagious positivity.

“This season I really think that the coaches helped the most,” Behr said. “Throughout the summer, they were always reminding me and the rest of the team what we needed to do, and they were always positive even though they had no clue what was going to happen with our season because of the pandemic.”

The radiant positivity spread from the coaches to the players while the season was in play. The Mustangs were able to capture what they could, and they turned that into something they could benefit from.

“We always made sure to cheer each other on and try to keep as much of a ‘team spirit’ as we could,” Behr said.

One big win was the fact that no one on the team was forced into quarantine. The girls made it seem like it was their mission to keep the year alive, and they did not disappoint.

Metea’s racers were able to fulfill themselves with long-lasting memories during a very memorable year. Many highlights were positive moments for the players

“My favorite memory is probably from the conference,” Behr said. “I had a great race and it was so much fun to watch everyone else run. I think pretty much the whole team had a great day.”

In a season in which the boys’ golf team was not even sure if they were going to play or not, they went out and made the most of every opportunity.

The Mustangs started their conference play against DeKalb, and both levels walked away with a victory. Junior varsity and varsity kept their successful season going by narrowly defeating Waubonsie at Naperbrook Golf Course.

The boys’ golf team kept piling on their win streak as they set a school record 145 when they defeated St. Charles North and then squeaked by with another tight victory against Waubonsie. The team’s first loss was a close one as it came at the hands of Wheaton North. The  Mustangs looked to make up for it, and they did, finishing third out of six at the Marmion Invite.

The boys’ team wrapped up their regular season by emerging victorious against the Redhawks with a score of 147. The JV team won the DuPage Valley Conference, and the varsity team ended up finishing second in the conference.

The girls’ golf team, despite the restrictions of the looming pandemic, produced a formidable season this year.

As a result of their persistence, the players set records this season, with the lowest match score ever rounding to 175. The team also met their goal of placing third at regionals. Sophomore Abby Terada placed an individual spot in sectionals where she placed 44 out of 66.

“I made it to sectionals this year as an individual,” Terada said. “It was the first time a Metea girls’ golfer made it since 2016, and it was an honor to represent my school.”

This season, although record-breaking, still was conducted under the restrictions of the pandemic. Some of these cautionary practices included wearing masks during practices and games, enforced social distancing, and leaving straight after matches. Although some of these regulations affected crucial interactions between team members, that did not stop them from having safe gatherings to strengthen team bonds.

“With COVID-19, it is so much harder to bond as a team but we still managed to connect outside of official practices by going out to eat or hang out in someone’s backyard,” Terada said.

Now with this season officially wrapped up, Lange is already looking forward to next season where he can continue to watch the girls’ golf team grow as players and set new goals.

“With a young team, I feel we can keep winning more and more each year,” Lange said. “My goals would be to have a .500 record (4-4) and to have each girl achieve their own personal goals.”

Terada’s personal goal next season is to qualify for regionals again, whether that be as an individual or with her team. Terada is still proud of the hard work and scores that came out of this season.

For now, both Terada and Lange commemorate all the hard work that went into this season’s matches, displayed in the girls’ all-time high scores.

“I’m so proud of the girls for how well they did, and how maturely they handled the pandemic situation,” Lange said.

In the most socially distanced sport, the Mustangs were able to have an exciting season. Despite them having fewer interaction rules due to them being spaced apart, there were still a few precautions the players had to follow.

“We were still able to play all our scheduled matches, and it was not that bad,” senior Meera Baid said. “We just had to take more precautions while practicing. We had to limit bus rides and there were fewer spectators.”

Practice precautions and limited bus rides were a couple of new changes the team faced. One important thing that was impactful to the girls was that there was not going to be anyone competing at state. Many players of all skill levels make it their goal and prioritize many hours of their lives to have the opportunity to participate at state.

“The thing COVID-19 affected [us] the most was state because that got canceled, which is what some of us work up to,” Baid said.

There is no doubt that COVID-19 changed the way the girls played, but they were able to improvise and adapt. To stay competitive against other DVC powerhouses such as North and Neuqua should be considered a win by any standards.

“Our team stayed competitive throughout the season, and as a team, we had some good and bad meets, but overall, we had a good season,” Baid said.

Not only did most of the team have success, but players like Baid had a very fortunate final year despite the adversity they faced. Baid was able to outlast her opponents and not only reach sectionals but also came in first place.

“I think this year was my most successful one because my record was better than the other three years,” Baid said. ”I finally won sectionals after three third place [finishes], so that was definitely a proud moment.”

Baid was able to contribute some of her success to the coaching staff. The coaches were challenged with evolving to the awkward situation and keep the players motivated. They were able to pull off a great season with multiple different events.

“Our coaches had a huge impact on us this season,” Baid said. “Although it was hard to do many things with the pandemic our coaches adapted well with the situation and still made it very memorable for us. We were able to have a senior night, a couple of fundraisers, and had the same enthusiasm during our practices because of our coaches.”

Girls’ swim and dive composed an impressive season this year while learning to work with the added constraints that come with the indoor sport. Sophomore Amanda Schmitt in particular qualified individually for sectionals this year, accomplishing a significant personal goal.

“There were a lot of mental and physical barriers after not being able to train for such a long period of time,” Schmitt said. “I was pretty surprised at my ability to push through and perform in the end.”

Despite the team’s swimming-related accomplishments this season, the importance of teamwork and bonds throughout the season added to the achievements this year.

“The girls on the team are everything to me,” Schmitt said. “They are my friends and motivators in and out of the pool. I don’t think I would’ve been able to make it through the season without them, and I wouldn’t trade our relationships for anything.”

Although treated similarly to any other swimming season, COVID-19 precautions were thoroughly practiced and strictly enforced in and out of the pool. These restrictions included shrinking the season’s time span and the size of meets, minimizing the number of people at practices and meets, and limited contact in the pool. Even with these added conditions, the pandemic failed to put a damper on team spirit.

“Even though there were many safety precautions and sacrifices taken by the team members,

everybody maintained a positive attitude and took advantage of every opportunity,” Schmitt said.

With the girls’ swim and dive season officially concluded, Schmitt is already jotting down goals for the next swim season where she will be considered an upperclassman.

“My goals for next season are to help build Metea a larger state team while expanding my state lineup as well,” Schmitt said. “Since I will be an upperclassman next season, I’m hoping to improve my leadership skills.”