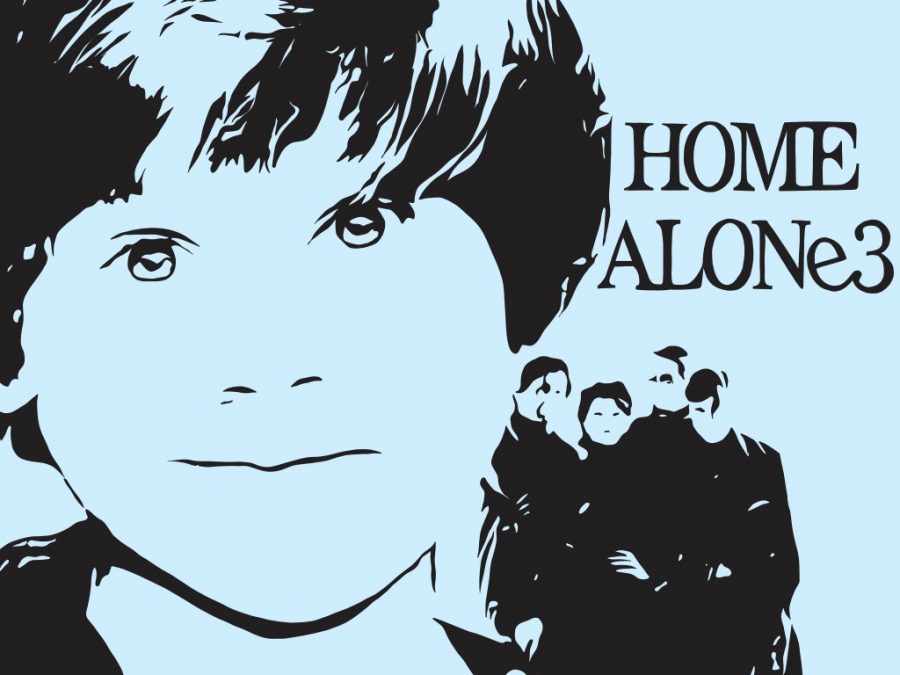 Home Alone 3 was unnecessary and a disappointment to its viewers.

The storyline of “Home Alone 1” follows a child named Kevin McCallister, portrayed by Macaulay Culkin, who is accidentally left home alone when he was supposed to travel with his family to Paris, France for Christmas. While left alone, Kevin enjoys his time by himself until two burglars try to rob his house. In the second movie, “Home Alone 2: Lost in New York,” Kevin gets separated from his family once again, but at the airport causing him to end up in New York and his family in Florida. From there, Kevin finds out that the burglars that tried to rob his house two years before the events of the sequel escaped prison and plan to steal from a toy store.

The first two movies do a fantastic job of being Christmas comedies without forgetting about the overall message of family by having scenes in the movie where the viewer witnesses Kevin and his mother realize how much they regret leaving everything terrible termes, but there stands the third movie of the franchise, “Home Alone 3.”

The third film, “Home Alone 3,” was made five years after the sequel, “Home Alone 2: Lost in New York,” meaning that Macaulay Culkin would be a teenager at that time and a little too old which defeated the purpose of the plot which is to watch someone who is deemed too young to be left alone at home while their family is several miles away, so they had no choice but to make the story now centered around Alex Pruitt, portrayed by Alex D. Linz. The writers attempted to add more suspense by going from having two comic relief thieves, like in the first two films, to four spies who illegally export machinery.

“Home Alone 3” opens the movie with the spies trying to figure out how they should sneak a microchip through security. That microchip has the power to control one of the most powerful nuclear bombs. They decide to hide it inside a toy car and then stuff the car in a random bag, but after they all went through TSA, they picked up their bag only to realize that someone who was in line before them mixed up the bags and took the one with the microchip. The spies assumed that whoever mixed up the bags was going to Chicago, Illinois, but it is revealed that the person who took the bag with the toy car was Alex’s neighbor who ends up giving Alex the toy since she has no use for it. Then, Alex finds out that he has chickenpox and must stay “Home Alone” while his parents are off to work. Alex, eventually, finds the spies lurking throughout the neighborhood, breaks apart the car, discovers the microchip, ultimately connects it to the spies who are after this chip.

“I’m kinda upset about it because I really like my family, even though sometimes I say I don’t. Sometimes I even think I don’t.” This was a quote from the first film which did a phenomenal job of showing Kevin’s regret for taking his family for granted. In the first movie, the beginning is just dedicated to showing the viewer Kevin’s home life and the rocky relationship he is developing with his family, but realizing halfway through that he wishes that he could patch things up with everyone. In “Home Alone 3,” there are only two scenes where everyone in Alex’s family is having a conversation with one another, and those conversations are just filled with awkward silences.

Just like the other two films, Alex sets up traps to catch the spies, which leads to the spies being caught and are arrested by the FBI. Even with these new antagonists, who are supposed to be so much more intimidating than the originals, they do not bring anything to the table. They have little to no lines and do not have personalities. This appears to be an attempt to make the spies look more threatening, but they are just dull. For a good chunk of the movie, I was not sure if what they said was intended to be funny or if that was supposed to be a serious line that was executed poorly. The only time where I am confident that a joke was written in was at the beginning of the movie where the spies are searching all over the airport for the bag. “I checked the Dallas, Miami, New York, and Denver lounges. Nothing. Bars, restaurants, club lounge. Clean. When I was in the john I didn’t see anything there.” The sequel would have been the perfect ending to the series because, even if the third installment had the original cast, the concept of this series gets repetitive very quickly. A child is left by himself, discovers some burglars, sets up traps, and has the criminals arrested.

I would give “Home Alone 3” a two out of ten. I am giving this movie an extra point because at least the writers tried to make the movie different from the first two, but it would have been best if they just left the films alone.