Speech team gives inside look at this year’s season 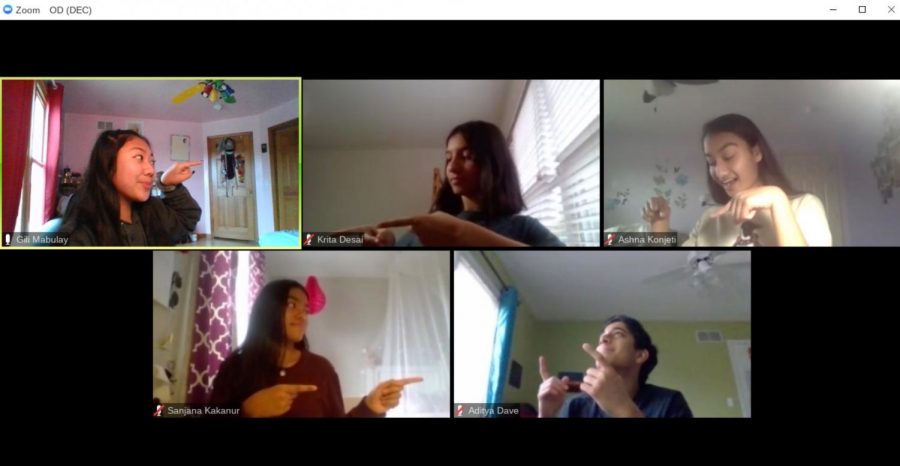 Speech teams category DEC during one of their virtual practices.

Students are encouraged by teachers and their peers to join in an after school activity, like a club or a sport. One of those is the Metea Valley Speech Team. Despite the difficulty in communication this year, speech members and coaches continue to keep in touch.

The speech team is all about teamwork and dedication to everyone’s thoughts and opinions, especially those that are new to the team this year. It is a student led and coach managed a competitive team that puts relationship building and confidence bolstering first. The speech team competes with other schools, however, the real competition comes from being a better speaker and performer than they were yesterday.
“Online speech is going better than expected,” senior Vivian Yuan said. “Our team has meetings every week where we bond with each other and play games just so we can try and mimic that real team experience. Even online, I can still feel that family aspect coming through which is so nice, other than that rehearsals and tournaments are all going on through Zoom and video submissions, and it’s going pretty well.”

Given the online platform, prepping for competitions can be difficult to prepare. Nonetheless, members think it is still an exciting thing to do. The whole team is working together to figure out how to manage to be comfortable while online and not in person. The change has not been easy for some, but they are working together to ease that difficulty.

“Honestly, this speech team season has been pretty rough so far,” senior Robyn Haddad said. “It’s so different from the past two seasons I was a part of and it’s difficult to make a change like that. Nonetheless, the whole team is working together to figure things out and it is really starting to pick up speed. That being said, though, I would give anything to go back to being in person for speech.”

Tournaments look very different this year because they are online. Not only are the logistics different, but competitors are missing out on the excitement of being next to their team.

Although online-learning has proved difficult for the team, they have continued to thrive in competitions. The speech team dominated the Naperville Central Tournament of Roses with 428 points, 14 students in finals, and another 19 in next in finals last Saturday.

“I have seen our Captains Peyton Owen, Tanmay Varshney, Vivian Yuan, and Bhargavi Sririam really step up with a sense of pride and purpose to navigate the Mustang Speech Team through these rough waters until we can get back together.” Speech Coach Mark Simon said. “Their knowledge, patience, maturity, passion, and commitment have reinforced in me that fact that we are doing things right and will emerge stronger because of what they can do and what we believe in.”