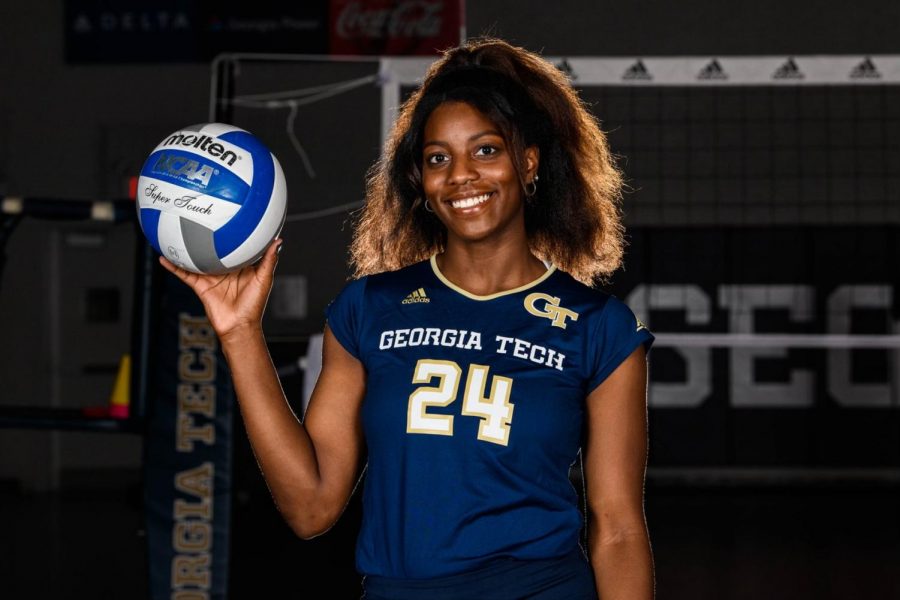 Mikaila Dowd led her team in kills per set during her freshman year with the team.

328 and 1002 are numbers that former Metea volleyball star Mikalia Dowd knows very well. Dowd has a decorated career, and during her four-year stint as a Mustang, she broke the record for the most kills in a season (328) and the most kills in a career (1002). During her senior year, Dowd ended it off with 29 wins and became a DuPage Valley Conference winner. She is now an outside hitter for Georgia Tech and was recently a part of the ACC second team in 2019.

“[Doing well in school] is just something I have always had to do,” Dowd said. “Even in high school I would go straight to practice from school and had to find time to do homework. Really being able to time manage is so crucial. When you are busy, you really make sure to squeeze in the important things, and for me that is school.”

Her academic success brought her to the south as she wanted to pursue a major in biomedical engineering. Georgia Tech has flaunted its high-ranked engineering status on its website, and she wanted to be a part of that.

“I chose Tech because they are very good at setting their students up for success,” Dowd said. “The major that I chose is very difficult, and Georgia Tech is one of the best schools in the country for [biomedical engineering]. I like my coaches, and I love my teammates, and it is such a positive environment within the athletic community, and I really wanted to live in a city and not just a college town.”

The volleyball star has high praise for the volleyball team and the staff who work with her. She attributes her 15 teammates as her biggest motivators.

“My teammates are the people who motivate me the most,” Dowd said. “I always play for my teammates, not my coaches. I want to do my best for them so we can succeed together.”

Dowd knows that the journey of being a D1 athlete would be much harder without the support of a team. Dowd has also worked to stay humble with her teammates.

“I personally do not think I am very unique in my playing style,” Dowd said. “At this level, my team has been very successful as of recently, and I think my contribution to that is just being a very dependable player. I play for my teammates, which means I am not looking to be super flashy and score the most points in a game. I want to cheer on my teammates and put them in the best position and do my job effectively. I try not to make a lot of errors and to score as much as possible. I like to contribute to my team’s success, but I do not feel the need to be the whole reason we are successful.”

Dowd has made an outstanding impact with her team and has left a good legacy behind her. Having a record-breaking season with Metea, being a top player in the ACC, and being an inspiration for athletes who struggle in school summarizes her legacy.

“To continue my legacy, I primarily just want to make a positive impact on the underclassmen and the freshmen coming in and lead by example,” Dowd said. “[I] like providing a culture that fosters being there for your teammates, working hard, and prioritizing the little things rather than being caught up in wins and losses.”

In addition to volleyball, Dowd is focusing on biomedical engineering. Her passion for medicine and health is fueled by her desire to help her community. The path towards public health looks promising because it will give her the platform to assist the people around her.

“After college, I have a few options in the direction that I want to go, but primarily I do want to get a medical degree,” Dowd said. “I also want to get a degree in public health because primarily I want to be in a profession where I can help a wide range of people, and I love the health and medical field, and I think it is a place where I could really make an impact.”

Along with helping her future community, Dowd has a few words that will help out students who are planning on going to college while joining athletics.

“Choose the college that you go to based on the school and not only the team,” Dowd said. “The team and coaches that you meet may not be who you play with or the kind of coach that you will get. Also, being aware that in the beginning, it is going to be hard, but don’t mistake progress for failure. You are supposed to get worse before you get better, and find comfort in the fact that it is okay to make mistakes.”