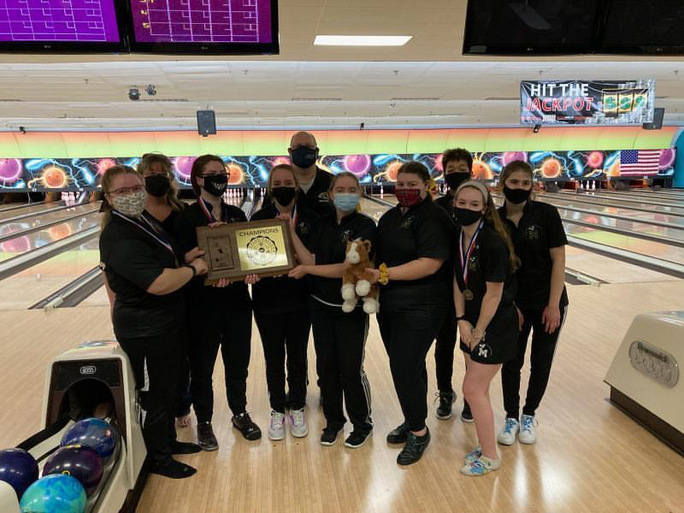 All six of the varsity starters made the all-conference team.

The bowling team’s senior night ignited energy into the group and gave them motivation for their win against North on March 9. The energy only continued to climb as the night went on and scores proved record-breaking. The end result of the celebratory night was a win against Naperville North 3021-2235. Three bowlers went over the score of 600 and collectively broke a Metea Valley record of 1083 in game three. There could not have been a better way to commemorate the seniors this year than with a record-breaking game.

“Senior night was very emotional for all of us,” junior Elizabeth Mansmith said. “All of the girls are very close with each other. It is almost like a second family. Knowing that we would be losing so many of them was very hard, and there were lots of tears.”

Although senior night proved to be one of the many highlights of this bowling season, the Mustangs still had their DVC championships to worry about. However, it seems they did not have to worry too much because they ended up winning the DVC Championships for the third year in a row, two of those years in which they were undefeated in conference matches.

This year, six of the girls placed out of nine spots in their conference, which has never been done before, setting another record. Not to mention their win at sectionals where Mansmith and junior Sydney Lewis both placed. Lewis had also previously scored a perfect 300 and a 700 series this season.

“I put in a lot of work in the off-season by practicing and participating in leagues and tournaments,” Lewis said. “I also accomplished some additional goals that I never expected.”

After such an exciting season, it was hard to hear that the Illinois High School Association (IHSA) did not give the bowling team a regional tournament or state series this year. However, the New Trier Girls Bowling program created and organized a virtual state tournament that the team participated in.

The results reflected the team’s hard work that has been continually shown throughout the season. The team placed fourth out of the 80 teams that participated in New Trier’s virtual state competition. Lewis placed third overall in the competition and first in the York Sectional on top of her achieving first in the DVC conference.

“I think the virtual state confirmed what we had suspected,” Head Coach Kristen Mansmith said. “Which is if we would have had a state series this year, Metea Valley could have brought home a trophy.”

If the bowling team could make history this year, next year is sure to be exciting without the strict regulations that COVID-19 has made necessary.

Although COVID-19 had not directly impacted the team’s bonding, it had certainly put a damper on the season. Tournaments and the state series were canceled by the IHSA, and the expected regulations were put into place.

“Everyone on this year’s team got along very well which made the season a lot of fun,” Lewis said. “We did miss riding the bus to and from practices and meets because that allows us to spend time together, but we were still able to bond as a team and have a great season.”

Throughout the season the team had been able to bond through their highs and lows and struggle and fail together, becoming closer than ever before this season.

“I honestly have nothing to say but good things [about] these girls, and they are some of the closest and kindest people I think I will ever be in my life,” E. Mansmith said.

The team is hoping to expand their family next season. The pandemic stifled the recruitment process this past year, and the bowling team is desperate to enlist more bowlers for the 2022 season.

“Our team wishes more people would consider bowling as a legitimate sport because of the amount of skill and athleticism required,” Lewis said. “You would be amazed to see the scores our team can put up against teams throughout the year.”

The bowling season is expected to start early Dec. next year as a winter sport. For more information on joining the team contact coach Mansmith.

“The Metea Valley bowling team is a super fun team with great coaches who truly care about their players and their futures,” Lewis said. “It is for anyone who wants to learn to play at a competitive level in a lifelong sport.”