Weekly Movie Review: ‘The Trial of the Chicago 7’ poses an accurate representation of its historical background 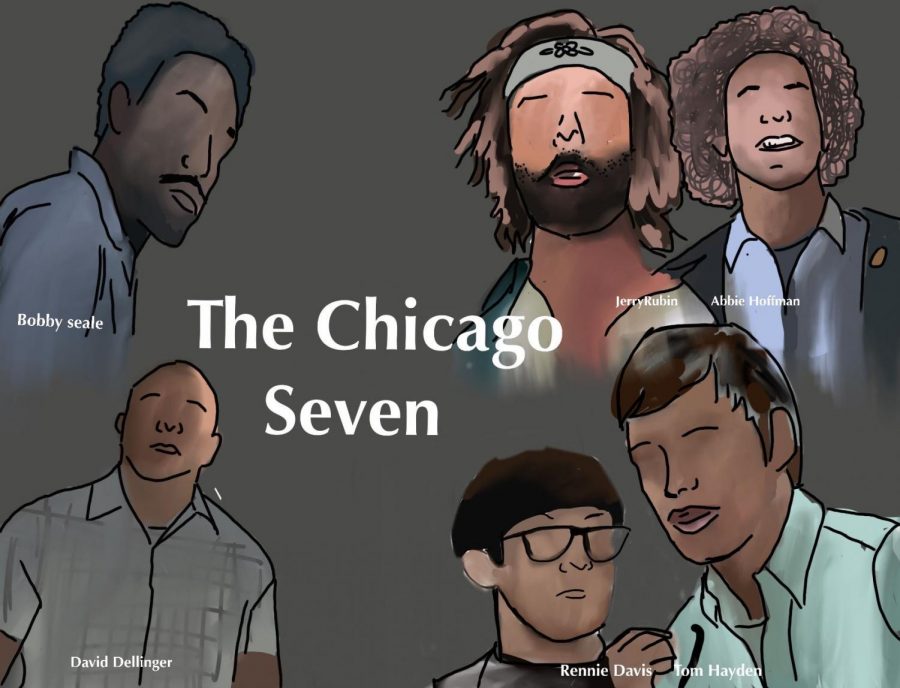 ‘The Trial of the Chicago 7’ poses an accurate representation of its historical background.

The “Trial of the Chicago 7” was a huge turning point in history because it dealt with racism and police brutality, much like the events in today’s society. The movie premiered on Oct. 16 last year and was highly rated as well as circulated in the media. What started off as a movie trying to shine a light on the activism of the Chicago 7 soon turned into a slander on not only the Chicago Police Department but, also the American judicial system.

“The Trial of the Chicago 7” takes a deep dive into what actually happened during the long prosecution of political activists for riots incited during the Democratic National Convention in Aug. 1968. When riots broke out, Abbie Hoffman, portrayed by Sacha Baron Cohen, and Jerry Rubin, portrayed by Jeremy Strong, were co-founders of the Yippies movement. Rennie Davis, portrayed by Alex Sharp, and Tom Hayden, portrayed by Eddie Redmayne, were co-founders of Students for a Democratic Society (SDS). David Dellinger, portrayed by John Carroll Lynch, was a part of the National Mobilization Committee to end the war in Vietnam as well as two singled-out individuals named Lee Weiner, portrayed by Noah Robbins, and John Froines, portrayed by Daniel Flaherty. Lastly, Bobby Seale, portrayed by Yahya Abdul-Mateen II, as leader of the Black Panther Party, was arrested and charged alongside the seven men with the conspiracy of inciting a riot. The following chunk of the movie portrays an unfair trial led by Judge Julius Hoffman, portrayed by Frank Langella, who on many accounts was seen as unlawful and racist. Although the Chicago 7 began the trial rowdy and in a way segregated into their own groups, by the end of the movie, they put aside their differences in hopes to dissolve their case despite that system working against them from the beginning.

Cinematography is something I highly pay attention to because if it is not appealing to the audience in the first place, how are we supposed to be engaged in it? However, “The Trial of the Chicago 7” had no problems achieving the cinematography aspect of the movie. During the trial scenes, I immediately took note of the undertones. As the trial drags on, I see that the courthouse becomes a cooler shade rather than a warm shade at the beginning. Even by trial day 23, there are little to no warm undertones anymore, but by trial day 151, you start to see the warmness similar to day one because it follows that feeling of highs and lows of the trial because it is coming to an end. Whether this was intentional or not, it was still greatly directed on Aaron Sorkin’s part.

On the first day of the trial, Bobby Seale addressed the court and informed them that his lawyer was in the hospital and Seale was left without formal defense. While being on trial, with no one to defend him, he resorted to interrupting the court on many occasions, begging for the judge to hear him out. Knowing that the trial was against him and that he was being denied basic rights, he refused to let the option of letting the other defense attorney represent him because he saw that the courts were neglecting him. With this notion in mind, he sought to be heard one way or another and continued to voice his arguments. He was ultimately charged with 16 counts of contempt of court. Towards the end of his time on this trial, he was gagged and tied down in front of everyone in the courtroom to “learn respect,” as stated by Judge Hoffman in the movie. This scene really depicted the animosity of Judge Hoffman because not only was he not abiding by the law and had a defendant on trial, but he also allowed the court marshals to attack a civil defendant.

Just when you thought the Chicago 7 were on track to win the trial, the directors threw a curveball that left the audience speechless. Five months prior to the beginning of the trial, United States Attorney General, Ramsey Clark, investigated the riots incited in Chicago and those who were arrested. He ended up dropping the case because he found nothing to connect the protest leaders to the sparking of riots. When he was brought to the witness stand during the trial, after he stepped down from his position, Judge Hoffman opted to hear his examination before the jury was put to the stand to see if anything Clark stated was relevant. Clark shared his investigation, which would have been huge for the justice of the Chicago 7, but Judge Hoffman felt it was not relevant to the case. It was the first time in the movie that you saw William Kunstler, the defense attorney, really lose his cool in the courtroom because he knew that was their golden ticket to winning. The tension in the room during this scene was so intense that you could feel the defeat of the Chicago 7 because at that moment it was painfully obvious that they would lose.

I would rate this movie a nine out of 10 because while the cast of this movie is what drew me into watching it, the story is what kept me on the edge of my seat for two hours. Once it finished, I felt like I needed to know everything about the case. Who the defendants were before the riots? Who was the head of the CPD at the time? I had so many questions. When a movie drags you into hours of research trying to find more of the story, you know that it had a solid story because you can not stop thinking about it. Additionally, the emotional connection you form with the characters through the whole movie makes you feel for the seven, it makes you want to protest for the injustices of a closed trial from 1968.