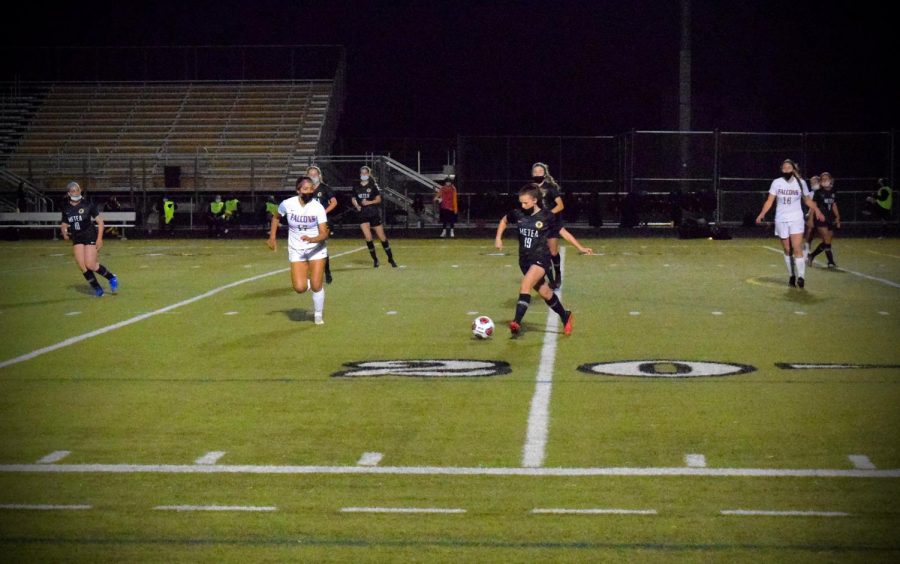 The crowd was alive and full of anticipation in Mustang Stadium last night as the game against Wheaton North began. The crowd’s energy soon shifted as the Wheaton North Falcons scored within the first few minutes of play. Minutes after the first goal, Wheaton was able to scramble the Mustang’s defense and drove another goal into the back of Metea’s net. With two goals already in the net not even 10 minutes into the game, the Falcons were already proving themselves a tough opponent.

Nearing the end of the first half, the Mustangs finally weaving through the Falcon’s defense, leaving their girls scattered and slipping in their first goal of the game. Freshman Lucy Burk scored Metea’s first goal of the game and helped the Mustangs infiltrate Wheaton’s defense multiple times. The first half concluded with the Falcons leading 3-1.

“[Wheaton North’s] fast start clearly made a difference,” Head Coach Christopher Whaley said. “We had a lot of opportunities in the first half, but we did not finish [them].”

Although the scoreboard was intimidating, the girls did not lose energy or confidence on the field. They were able to rebound from a tough first half, and made a considerable number of shots on goal throughout the second half. Even though the Mustangs were challenging the Falcons offense more frequently, Wheaton North continued to persist through their defense and slid in one more goal midway through the second half. The rest of the game was filled with turnovers by each team and a lot of empty pursuits for another goal. The final score was a Mustang loss of 4-1.

“I do not know if we underestimated some of their speed, but I think we just got ourselves in a situation where we were a little unorganized,” Whaley said.

Going into the second half against a two-point lead would seem to some as if the game was already lost, but the girls lost no ounce of confidence getting back on the field.

“We told the girls not to play timid, to step up, [and] to get higher in the field,” Whaley said.

“A lot of these girls have never played varsity soccer before, and it has been two years since we have played, so we have got our work cut out for us,” Whaley said.

Despite this being a rocky start to the season for the girls, it is clear with some team building and practice they will continue to better themselves.

“We just try to get better and better, and by the end of the season, they are usually competing with the best teams around,” Whaley said.

Speaking of future games, the girls do have the Pepsi Challenge against Maine South tomorrow morning.