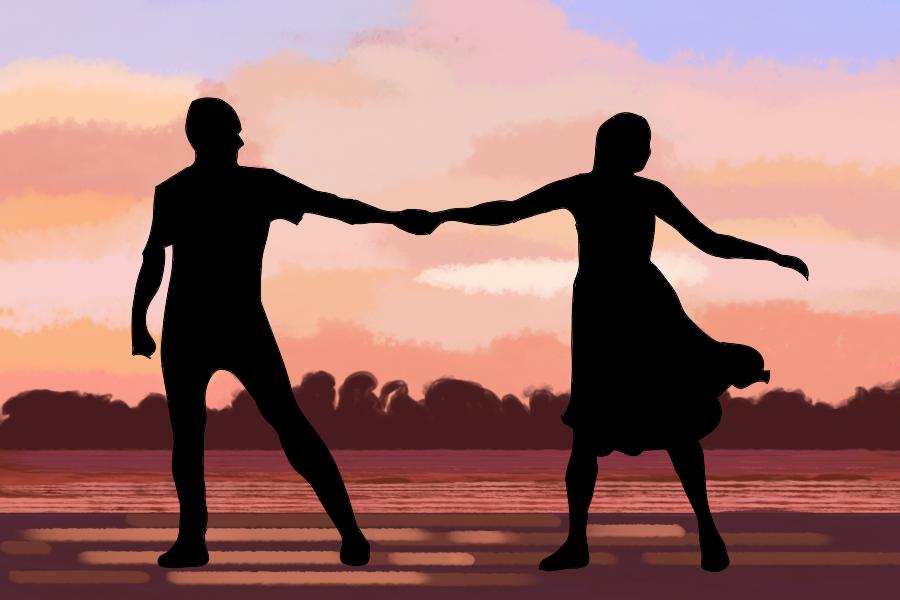 "A Week Away" is a musical that is very disorganized and does not stand out from the rest of the Netflix Originals.

Ever since the negative feedback that critics and audiences gave to the film adaptation of “The Prom,” Netflix made an interesting choice by releasing another musical, but this time they aimed at Christan audiences. The thing is, even the demographic switch can not save this movie from its bland writing

The film follows a troubled boy, Will Hawkins, portrayed by Kevin Quinn, who is sent to a summer camp with a foster family instead of juvenile detention. Camp Aweegaway, while built on the basis of Christian teachings, thrives on the division and rivalry of the camp’s teams: Verde Maximus, Crimson Angels, and Azule Apostles. The Azule Apostles are the reigning champs, led by Sean, portrayed by Iain Tucker. Will’s foster brother, George, portrayed by Jahbril Cook, is a cliche nerd who follows the rules of the Bible and is the leader of the weakest team, the Verde Maximus. The musical numbers kick in right when they arrive at camp, and Will finds himself infatuated with the camp director’s daughter, Avery, portrayed by Bailee Madison, and he is stuck in a web of lies he created to make him more respectable in the eyes of a girl who is quite religious. After quite a bit of singing, George introduces Will to the camp war which is a series of games that the three camp teams compete in to find the final camp champ. Sean, the story’s antagonist, is confident in his undefeated team, but he shows his weakness in the rising popularity of Will. The whole movie revolves around a cliche love story and the weak rival between the newcomer, Will, and the camp’s queen bee, Sean. While being set at a Christian camp, sometimes the plot seems too out there to be religious.

From a cinematic standpoint, the film is super bleak. The writing does not shine and tends to come across as pushy. The storyline has the potential to be a modern religious fable that teaches kids that lying is not only a sin but will also cause many problems in your life. Instead, the writers gave us a ton of thrown-in biblical references and cliche teen movie lines that feel out of place at times. As if the church camp did not give away the religious feeling, the writers reminded us for a few seconds with lines like “reds going to win, God loves us more,” and “Jesus loves you.” The lines feel like you are being pressured into joining the Christian church with the reminders that God loves you, that he always has your back, and that if you sin, you will not go to heaven. I felt like I was a 10-year-old sitting in a church listening to the gospel again, although these gospel songs are more bubble gum pop and less calming prayer.

The cinematography is even more of a mess. Most of the shots seemed to have no reasoning behind them, and they did not improve the plot of the movie. Most musicals focus on flashy, fast-moving shots to pray more on the dramatics of the storyline, but this one was just all over the place. The over the shoulder shots showed too much of the person’s shoulder and head which made it distracting and hard to watch. The wide-angle shots are even worse. Most of them have way too many people in the frame, which is beyond distracting. Your eyes are unable to find the lead characters in the sea of extras. The cinematographer should have seen that the mob of people did not shoot well. As a viewer, you can interpret a lot of the shots to mimic the views of the camper, but then again, the shots make it hard to really comprehend.

The best way to describe this film is bland due to the lack of suspense and the plot moves very quickly. Will’s downfall about him getting exposed for being a criminal who only attended the camp to get out of juvie, was resolved in ten minutes. The antagonist, if I could even call him that, wanted to get more information about Will’s past, so he broke into the camp counselor’s office and found Will’s criminal record. Sean ran to Will’s friends to tell them, but his friends sided with Will. Calling Sean an “antagonist” is an overstatement. His motives are vague, and once the ending approaches, Sean apologizes to Will for telling his friends about his criminal record, saying that he wanted to impress the other campers, but the only people he told were Will’s friends, who hate Sean. Antagonists are great ways to add more suspense to a story but in Sean’s case, he can not even be considered wasted potential due to him being so one-dimensional and forgettable, the writers were better off having Will’s friends find out about the record on their own or if Will actually faced consequences for the sake of the downfall.

It would not be a musical without music, however, when it came to the songs, all of them felt like they were just there to move the plot faster. Yes, it is a musical, however, the whole point of putting songs in musicals is to put emphasis on a scene. There was one scene in particular where Avery was called perfect by Will. Avery proceeded to sing a song, “Place in this World,” about how she feels lost, right after that the scene just ended. The movie wants the audience to root for the idea of Will and Avery becoming a couple, but that duet was the longest interaction they had together, making the connection feel really forced.

This film gets a four out of 10. While the theme of friendship is enjoyable to watch, everything was just so sped up which made the movie feel like it was put together last minute.