Mustangs lack confidence, consistency, and communication on the court leading to a loss against Waubonsie 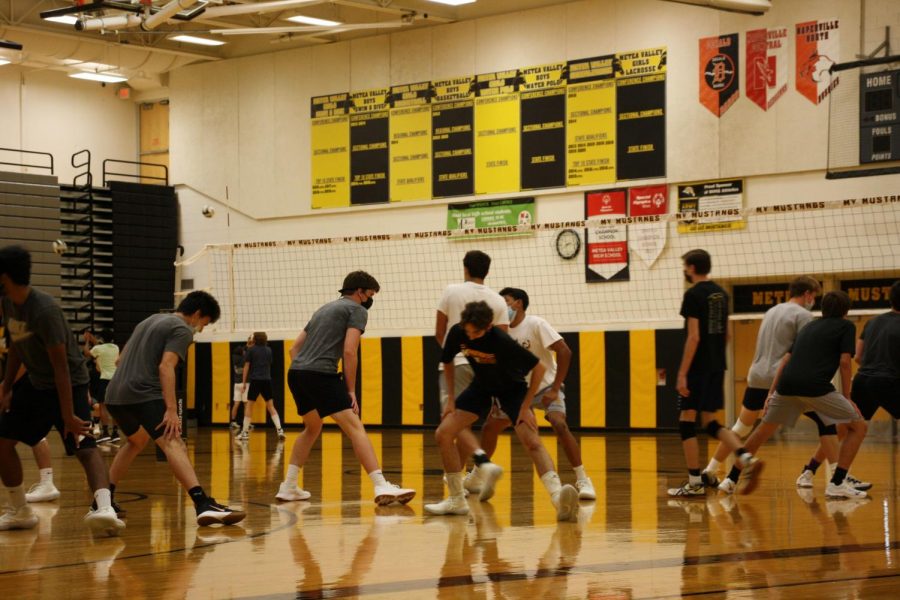 The boys' volleyball team start their warm ups with stretches.

The boys’ volleyball team faced Waubonsie and lost both sets of the match last night. The first set of the night was nail-biting as the Mustangs consistently stayed on the Warrior’s back, both teams rarely getting over a one-point lead. They dragged the back-to-back points past the 25 point marker. Metea and Waubonsie fought desperately to obtain a lead to secure the win. The Warriors followed through and won the first set 28-26. The Mustangs lost momentum in the second set, and the Warriors acquired an early lead that they maintained throughout the set. Ultimately, Waubonsie bested the Mustangs 25-18 in the second set. The boys left the court with their fifth 2-0 loss of the season.

The first set of the match-up proved promising for the Mustangs as they utilized convincing fake attacks on the net and double blocks. However, a lot of the first set points came from out-of-bounds calls which did not allow either team to showcase solid offensive play.

“I feel like our first set was a good representation of the progress we have made throughout the season,” senior Don Lazatin said. “We fought hard but still have a few things to work on.”

The outcome of the first set seemed to take away some of the boys’ tenacity going into the second set. Communication was hindered and their aggressiveness was no match for the Warrior’s quick kills across the court and solid blocking.

“I think how the first set ended shot our confidence a bit, and we came out a little timid,” Aister said. “Waubonsie played with confidence and energy, and we could not match it.”

During practices, the team is constantly working on bettering their confidence, consistency, and communication on and off the court. These three things are the key to winning a match this season and are what was lacking on the court against the Warriors.

The boys’ next game is an away match against Neuqua on May 11. The team plans to implement what they learned from Thursday’s match into their practices to prepare for the upcoming game.

“We just plan to be more focused and give more attention to detail at practice,” Lazatin said. “We play like we practice. It’s time to get back at it tomorrow.”