Mustang football gears up for a promising fall season 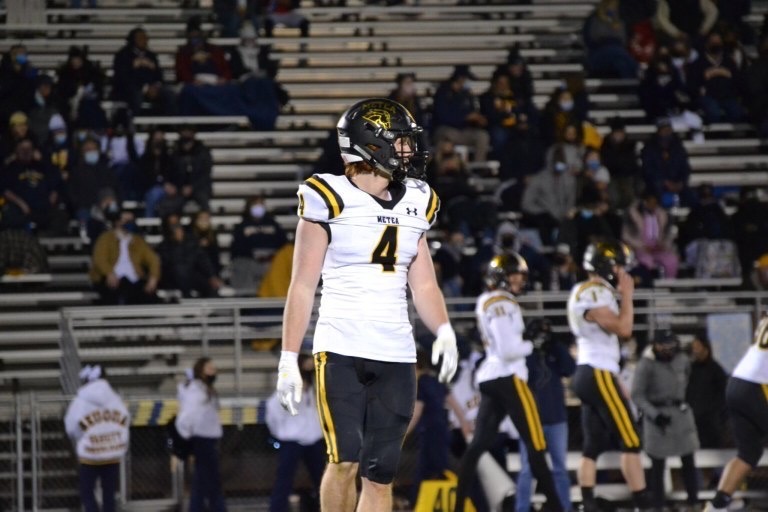 Mustang football is capable of a bright future with the help of their young core.

Metea’s football team ended the season with a disappointing 0-5 record after a tough loss to Neuqua. This season kicked off with a lot of new modifications that have not been seen before. The most notable of the changes was the lack of fans. Football has notoriously become a sport that many students come to watch because of the team spirit. The lack of fans hurt the team, but bigger problems inside the program led to the demise of Metea football.

“I do not think it was anything that went really wrong,” Head Coach John Parpet said. “I think it was more that we were very young. We started 20 underclassmen out of 22 starters. We had multiple guys out due to contact tracing, which really threw a wrench into a weekly plan. I believe you’ll see a different group this fall.”

Another issue that the team faced throughout the season was the lack of physicality from the players. In games like the season opener against DeKalb, Metea was not able to physically compete against the Barbs, which led to a 58-21 loss.

“We really struggled with physicality,” Parpet said. “I believe that it really resulted in our lack of weight room and ability to practice with pads on. We were a very physical team last year. We did a good job of controlling the line of scrimmage and weren’t able to do that this year. Guys have already started our weight program and have been told to prepare for a very physical summer.”

The athletes were able to elaborate on the same issues that coach Parpet could see. Varsity athlete Vincent Wronski understands that the guys were not able to match the other teams’ strengths. Wronski also was able to recognize that the team is young and has the opportunity to grow.

“We [were] not as physical as we needed to [be] and I think that really hurt us,” Wronski said. “However, a great majority of the starting players were juniors and some sophomores, so we definitely have the possibility to do better next season.”

Another issue that plagued the team was the safety protocols that were put on Metea sports. The absence of being able to come together as a team hurt the opportunity of bonding. The coaches also agreed to portion out the team so that if one person came down with COVID-19, then there would still be eligible players.

“With the season being in the spring, we tried to keep the team split into two groups to help keep the program from getting shut down by COVID-19 protocols, and I think that affected our ability to play the sport at a high level,” Wronski said.

When it comes to playing on the field, the team was able to take care of business as usual. Since football is a contact sport, there is difficulty with social distancing. Being out in the open space allowed the players to bypass the safety regulations and escape into a world of normality.

“The new rules did not have a big impact [the way we played],” Wronski said. “It felt like we were playing a normal football game. I did not even notice the new rules during the games.”

Even though the safety precautions did not directly impact the players on the field, there were still subtle changes made to the gameplay, such as changing the calling of the offense and what plays they should run. The offense looked different than years past and it really showed due to the lack of points the Mustangs scored.

“The offense was a little different this year because of the different style of athletes we had on the field,” Wronski said. “Last year, we were a little bit bigger and stronger, so we ran the ball more. However, this year, we are a lot faster, so we went with a lot of screenplays and short passes.”

There are bright spots in the program. Junior Logan Frederick broke the school’s all-time passing record in only 13 games. He will be a senior next year and should have the experience to lead next year’s team.

“Culture does not happen overnight,” Parpet said. “We need to continue to lay a foundation of our 4 pillars: attitude, approach, intensity, toughness. I would say that we are halfway there.”