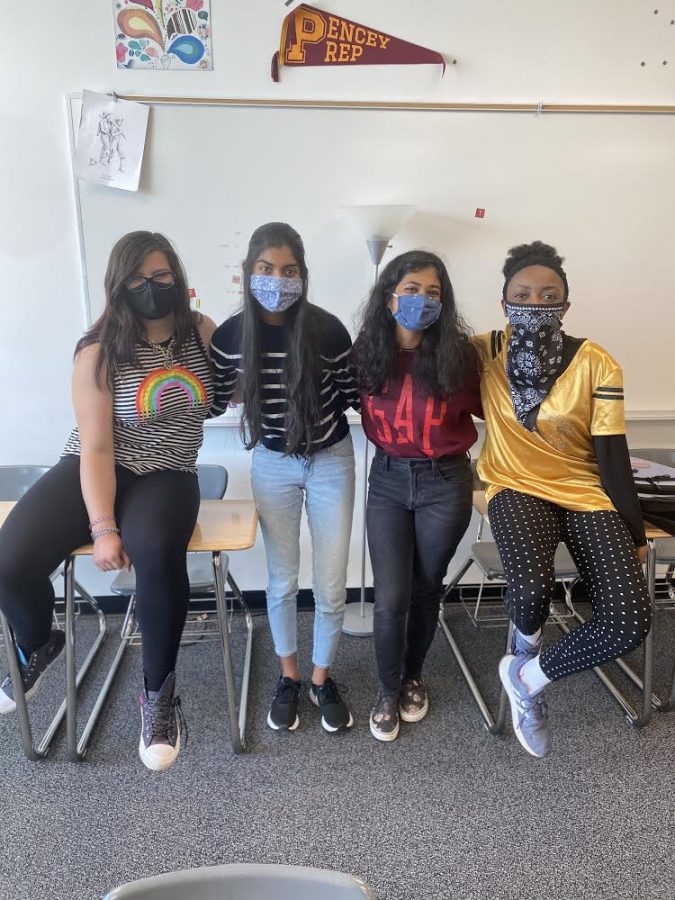 The Metea Mic’d team poets, Michelle Azie, Jo Jadhav, Ria Palo, and Sanjana Sivakumar, competed in their first, as well as Metea Valley’s first-ever, slam competition on May 1. With the initial Louder Than A Bomb competition, which they had initially gotten ready for, being postponed until further notice, the West Suburban DuPage schools decided to host a slam competition of their own. Seven schools participated with two Metea Mic’d members making it to the top 10.

Louder Than A Bomb is the largest youth poem festival in America. Chicago hosts one of these competitions every year, but due to COVID-19 complications, the organizers of the festival had to postpone this year’s event until further notice.

“This year, it was going to be our first year doing Louder Than A Bomb, but they had some internal issues at the last minute and postponed,” Metea Mic’d advisor Mara Porada said. “We were pretty heartbroken because it was the first year we had a team and enough dedicated people to do it. There were a couple of area high school teachers who thought well we all prepped for LTAB, so let’s kind of do our own thing and that’s what the West Suburban slam event was.”

Metea Mic’d started its first year as a club during the 2019-2020 school year. Their goal was to bring slam poetry back to Metea. Slam poetry had previously been a club back when the school first opened was soon forgotten after the few students in it had graduated.

“I had been running a Poetry Out Loud competition for three years, and Mara and I decided we wanted to bring black bring back slam poetry to Metea and kind of combine Poetry Out Loud with a new slam poetry club,” Metea Mic’d advisor Karen Aigner said.  “We realized that there were quite a few students who would be interested in participating in something like that, so here we are now.”

The club members prepared their original pieces to perform for the West Suburban slam competition. The preparation for the event required many revisions and practices for the members to be comfortable with a final product.

“With any sort of writing, it’s a lot of revising,” Metea Mic’d member Michelle Azie said. “It was more like I memorized it and then I thought it didn’t sound good so I kept scratching it. To be honest, it was not just about reading it and making sure I got all the words- it was also the emotion that I needed to convey. I wanted to incorporate those emotions into my poem. It’s like putting breath into the words that you wrote down in ink.”

Michelle Azie placed third overall in the competition of 30 high school performers. As a performer, getting on stage and presenting a piece is not easy to do for everyone and can be nerve-wracking.

“Visually, you think it’s only gonna be only 15 people who show up, but then you see there’s judges, and then you’re also performing not just in front of the people in your club but people from other schools- and there’s a lot of schools!,” Azie said. “It’s definitely an empowering experience, like, it channels the anxious energy that you have and puts it into the performance to make it more powerful. It is just really fun and energizing.”

The advisors had anxieties of their own leading up to the competition, but they were proud to watch their students perform the pieces they had worked on for months.

“I was crazy proud of them,” Porada said. “Everybody has this addicting energy that is released when performing. This year through COVID they have been so dedicated, and it was awesome to finally see their work.”

Metea Mic’d is open to all students and will plan to prepare for Louder Than A Bomb for the 2021-2022 school year. Anyone is free to join, learn about, and participate in slam poetry for the foreseeable future.

“If you’re a person who is a little bit interested in language, and even if you think you might be interested a little and you’re not quite sure, I would encourage you to come check us out and join a meeting,” Aigner said. “It is easily one of the most giving, and accepting and fun, and- I think we’ve used this word a few times- but it is an energizing environment to be a part of.”