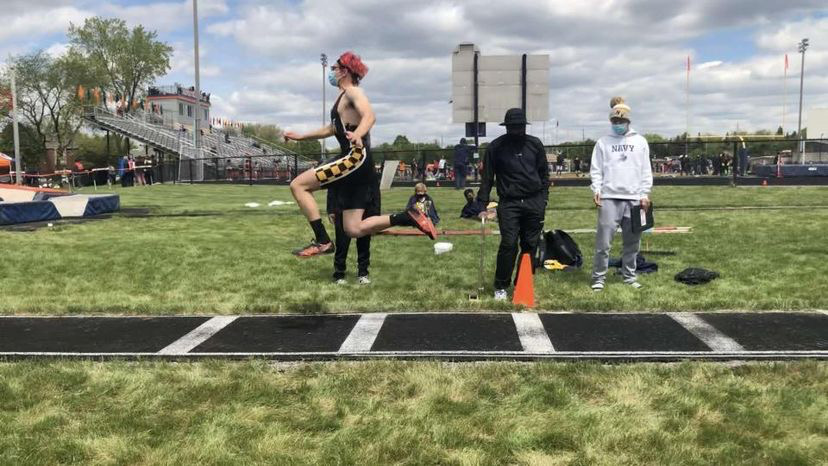 Koral Flinn can partake in multiple events. From long jumping to sprinting, Flinn has a strong athletic ability.

Junior Koral Flinn is a triple jumper for the Metea track team, but they will periodically join in a race whenever there is a spot open. Flinn has been on track since fourth grade after a group of their friends joined the team. A lot of their friends were on the track team and they wanted to be a part of it.

“I went to a private school for elementary and middle school, so I was really close to the people in my class,” Flinn said. “In the fourth grade, everyone was doing track and I decided to join as well, and I fell in love with the sport over the years. From fourth grade to eighth grade, I tried almost every event going from distance, to sprints, to throws, to jumps, and currently, I do triple jump and get put into long jump and a race whenever there is a spot open.”

Flinn has shown that they are passionate about track and field. Their team has set standards like working hard every day and taking care of your body. These standards were made so that the athletes have something to model. Flinn has had no problem meeting those standards, and it has given them a path to success.

“Since the beginning of the season, I have been living up to our team’s mission statement of ‘Work the Process,’” Flinn said. “As our coaches do a lot of research and put in a lot of time and effort to find the best ways for all of us to improve and so going into practice, putting in the work every day, eating and sleeping properly, and pushing myself to do better has really helped me improve this season.”

The track and field team’s mission statement has worked for Flinn, and in a year where there has been a lot of uncertainty, it has kept them in line and ready for every event. This year has been very triumphant for them, and it has boosted their confidence. Flinn has been able to secure multiple personal records for themself, and they are expecting similar results for the rest of the season.

“I have been very happy with my performance this year, especially because I have [met a personal record] at every meet,” Flinn said. “In our first meet this year, I finished second overall in triple jump which was the highest I have placed for triple at any meet, and at our last meet, I ended eighth against some harder competition, but it was good enough to earn a point for my team at our meet, and I am very content for even scoring one point, and I am really looking forward to closing out this season strong and improving further.”

Their performance this year can be reflected across the team. The team has been met with most of the same challenges that Koral has had, and the work shown in practice explains why the team is resilient.

“I think the best thing about our season so far is that every day everyone shows up to practice and works hard,” Flinn said. “We have been making our coaches proud to call us their athletes because we have great leaders on our team, we have great talent, and everyone has been doing the track equivalent of balling out at practice and at meets.”

The in-season practice has not been the only time Flinn has worked on becoming a better athlete. Throughout the off-season, they were able to do workouts by themself, and roughly a month before the season started, they were given workouts to do by their coach.

“To prepare for the season our coaches gave us preseason workouts a month in advance, and I will not lie, I did them in the week before our season started and that was not [good], so I was not preparing my body that well for the season, but mentally I was ready and excited for the season to start the moment I heard it was going to happen,” Flinn said.

The physicality in their workouts has led them to become a better racer, but it has not been the only thing they have done to improve themself. Flinn has corrected their diet and sleeping schedule. These two overlooked aspects are what they make sure they excel at.

“Diet-wise and sleep-wise, I have been doing great before and during the season to make sure I’m eating correctly and getting enough sleep because what I do off the track matters as much as what I do off the track,” Flinn said. “Diet and sleep are arguably the most important things I can focus on outside of practice to help myself improve. Otherwise, I have been trying my best in school and staying away from anything that could put my season at risk.”

Their body has changed throughout the extended off-season, but that is not the only change they have faced. Flinn has gone through personal changes to their identity and is now nonbinary. They changed their name to compliment the new look for themself. Thankfully, Flinn has received good feedback from their peers, and it has fueled their love for Metea athletics.

“I have been doing great this year when it comes to track,” Flinn said. “Over the off-season and during quarantine and the pandemic, my gender changed, and now I go by Koral, and I was relatively hesitant coming into the season with the name change, but everyone respects the name change. They all have been very good at referring to me as my new name, and they are all treating me like the exact same person I was, which has been really amazing to me, and it is made me so happy and excited to go into track every day.”

Flinn has gone through a lot during the extended off-season, but that has not stopped them from being a capable athlete for the track and field team. They expect more personal records throughout the season but are happy with what they have accomplished as of now.

“I can confidently say every single person on our team deserves success and each person is finding it in their own way and becoming a better version of themselves every day,” Flinn said. “I think the team is the best family I can ask for and the best group of individuals in the school.”