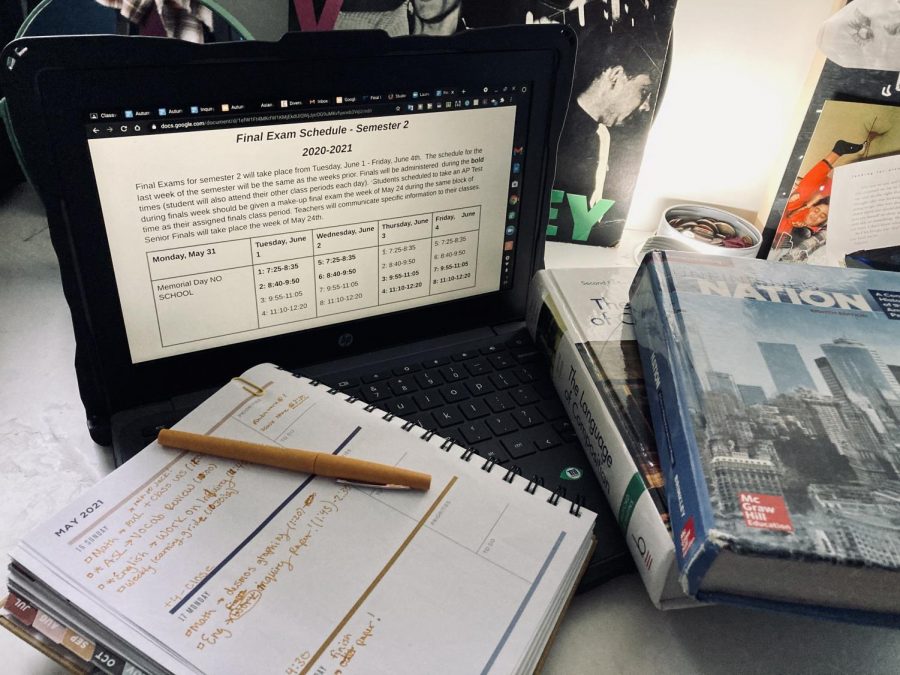 Final exams are set to be taken in the first week of June. This is the first semester since the fall semester of 2019 that finals can negatively impact students grades.

Finals season is back. Both remote learners and in-person students are getting ready to take their last exams of the semester- and, by extension, the year. For seniors, however, final exams come a week earlier, usually in the form of projects, take-home tests, or in-person tests. According to the official schedule, senior finals take place this week, while freshman, sophomores, and juniors test between Tuesday, June 1, and Friday, June 4. As exam season approaches, students reflect on the new hybrid model of test-taking.

“I am a freshman, so I never really got the true ‘finals’ experience,” freshman Mohammad Hisham said. “Especially [given I am] an online learner, I am not too worried.”

When it comes to test-taking, some students and staff believe online learners have an unfair advantage over in-person students. English teacher Karen Aigner believes online students have more resources readily available to them, which could aid them in their exams.

“English assessments are almost exclusively written assessments, so for us, the assessments have not changed dramatically,” Aigner said. “We will have the odd plagiarism problem, but we don’t really give traditional tests other than a handful of grammar assessments. But I do know that integrity has become a serious issue in other content areas. In this case, there may be a short-term advantage for remote learners- but over the long term, when we are all back in school together next year, remote learners are going to have a fairly steep readjustment to make.”

For online students, readjusting to in-person learning will be a challenge for next year, especially with many of them reporting that they feel unmotivated in class.

“Back in my freshman year, learning seemed so fun,” sophomore Hiba Awais said. “When you are in front of a computer screen for four periods a day, it just gets hard to focus.”

In-person senior Connor Adamek believes that while online students may have the advantage of taking tests in the comfort of their own home, being an in-person learner does have its perks.

“If anything, the people at home likely do not understand the material as well as the in-person people, so it kinda balances out,” Adamek said.

This year, exams may coincide with students’ AP tests. The schedule follows the College Board’s suggestion that any student scheduled to take an AP test during finals “should be given a make-up final exam the week of May 24 during the same block of time as their assigned finals class period.”

With both final exams and AP tests approaching, some students can begin to feel overwhelmed. Social and Emotional Learning advisor, Amanda Briggs, says that finals season causes anxiety and a decline in mental health for most of her students.

“I always worry for them at this time,” Briggs said. “It is very stressful.”

Another factor that may contribute to students’ worries is the district revoking the “no-harm” policy that they had implemented last semester. Under this policy, final exam grades could not bring down a student’s grade, only possibly increasing it.

Adamek believes the only reason the district took away “no-harm” finals was to boost students’ motivation to succeed in class.

“They probably abandoned it because people stopped caring about the class near the end of the semester because they knew nothing was going to harm their grade,” Adamek said. “That being said, who does want finals to hurt your grade? It was cool while it lasted, but I get why they needed to remove it.”

After witnessing a lack of motivation in her own students, Aigner hopes this policy change can inspire some students to work harder in class.

“I think teachers have gone this route in order to motivate students to take the end of the semester seriously and to stay on top of the work that they do throughout the semester–which has been a deep and profound struggle this year especially,” Aigner said. “For me, if I consider my reasoning about finals in general, it seems to be kind of a moot point. The problem isn’t about needing to be sure they value that final exam- but more about valuing the work they do throughout.”

But students say that after their hectic year of school during a global pandemic, exams do not hold the same value as they used to.

“I think this year has taught me a lot about priorities,” Awais said. “School is important, but so is health, family, friends–so many other things have taken priority over final exams.”

Seniors graduating this year say that while exam season is stressful, students should take care of themselves and be confident in their performance. “Do not break your back over them; you have been prepping for these all year so it does not make sense to overload yourself with prep work that you’ve already done before,” Adamek said. “Trust that you’ll remember more than you think, and of course, study!”