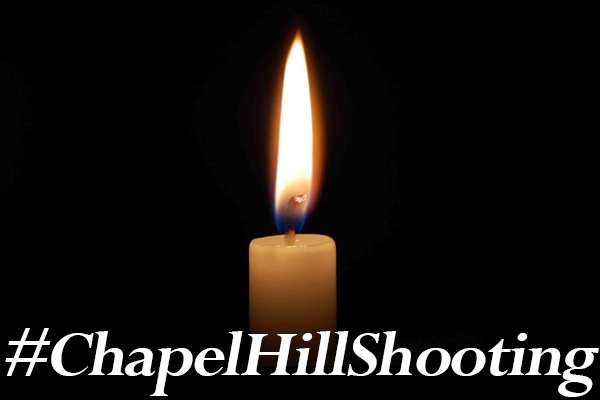 Tragedy struck the University of North Carolina, Feb. 10, when three young students, all of the Muslim faith, were brutally murdered at the hand of their neighbor, a Caucasian atheist.

Investigation is still undergoing, though, it was originally thought that the incident began from a dispute over a parking spot. The Saudi Press Agency released a statement Sunday regarding the murders: They believe the tragedy was a hate crime against the Muslim religion.

The terrorist attacks on the World Trade Center September 11, 2001 pushed the United States into a decade long war against those who caused the attacks, a Muslim terrorist group named Al Qaeda.

Soon after the tragedy of 9/11, many Americans succumbed to what is now coined as “Islamophobia,” or the fear of individuals of Islam or Muslim religion. From 2000 to 2009, hate crimes in America decreased by over 18%, while hate crimes against Muslims increased by over 500%.

“Islam preaches justice and peace for everyone, even people who don’t follow the religion. Many people just go off of what the media is showing, when the truth is really all behind the cameras,” sophomore Safa Shaik said.

After World War I, Hitler blamed the Jews for Germany’s loss of the war and led Germans to support the extermination of the Jewish population during the Holocaust. Today, we look back on the Holocaust as a tragic genocide fueled by ignorance and racism, yet we still allow ourselves today to perceive people of Islamic or Muslim faith as “terrorists”.

In times of distress or tragedy, we often look to blame someone to make ourselves feel better. Irrationally, Americans have blamed Muslim Americans for the Al Qaeda terrorist attacks.

Despite that Al Qaeda only represents a small portion of the Muslim population, for which the majority of Islam or Muslim citizens in America have no connection, ignorant Americans continue to call these individuals “terrorists” solely due to their religion.

“The actions of a few people should not be a reason to judge everyone from the Islamic community. It sickens me that people can discriminate a religion so much that there is a phobia created for these people,” junior Mounika Devakonda said.

These people live with the same values and views as any other American citizen. How can anyone base their knowledge and opinion of a certain race and religion over bias views and conspiracies?

Stated in the Quran, the religious text of Islam, “Allah forbids you not, with regard to those who fight you not for (your) faith nor drive you out of your homes, from dealing kindly and justly with them: for Allah loveth those who are just.”

Just like Christianity and Judaism, Muslims are taught to forgive, accept, and love, no matter the situation. Therefore, having violent acts of terrorism and war suppress and label an entire religion, when these acts are not based on or concerning the religious practice of Islam, is politically and religiously incorrect.

Whether a hate crime or a dispute over a parking space, three young students have been murdered. The wrongdoings of one man caused a horrible tragedy, though, it brought extreme exposure to a prolonged issue of racism and lack of knowledge.